Paul Heyman explained what happened when he was fired as RAW Executive Director. And, while away from WWE, John Cena got married on Monday.

Paul Heyman On Being Fired

Long-time pro wrestling manager/executive Paul Heyman was a guest on ESPN recently to discuss his removal as WWE executive director.

Heyman, the voice for former WWE champion Brock Lesnar, is currently helping manage Roman Reigns. Heyman has been with “The Tribal Chief” since he returned and captured the WWE title.

“When I took the role of Executive Director, I made an agreement with Vince McMahon,” Heyman said. “I want this job as long as every morning Vince McMahon woke up, he said thank God or whatever deity he subscribes to (that) Paul Heyman is looking after the store on RAW.

“And the day that Vince McMahon didn’t wake up and feel that way, I didn’t want the job anymore.”

He ATTEMPTED to bury the great @dc_mma.

He disrespected a fighting legend. But in reality, he just lit a fire under the double champ.

Oh, we also talked about his work with Reigns and much more.

Heyman held his title on RAW from June 2019 until June of the next year. He did remain with Lesnar on-screen after his removal.

“I’ve been in a similar role when Vince was not happy with me and it’s a miserable existence,” Heyman said. “I didn’t want it and apparently on that day on that given time and given moment, Vince didn’t wake up that morning thanking whatever deity he subscribes to that Paul Heyman was in charge of RAW.

“We left with a smile, a handshake and a hug. Absolutely no harsh feeling and actually better feelings about each other because of the way that it ended because it’s ended miserably before.”

Heyman will be next to Reigns at WWE “Hell in a Cell” later this month when he defends his WWE Universal title against Jey Uso inside of Hell in a Cell.

The card also includes Drew McIntyre defending his WWE title against Randy Orton and Bayley placing her SmackDown women’s title on the line vs. Sasha Banks. Both of those matches will also take place inside Hell in a Cell. 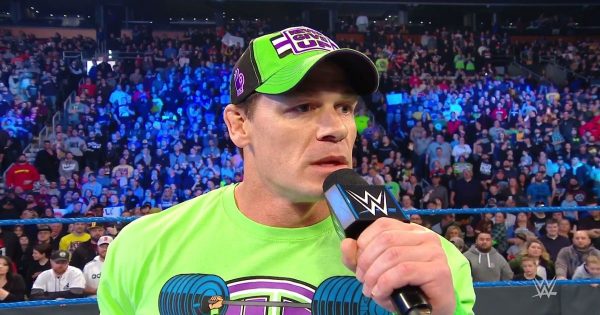 Cena and long-time girlfriend Shay Shariatzadeh were married during a private ceremony earlier this week.

According to a report by PW Insider, Cena and Shariatzadeh had the ceremony in Tampa. It has been confirmed by multiple reports.

The two went public for the first time in early March 2019 that they were dating. They met while Cena filmed a movie in Canada.

#WWE star John Cena has married his girlfriend Shay Shariatzadeh after dating for less than two years. Everything we know about their private ceremony: https://t.co/q4q7MPzcWb

Earlier this year, the two announced their engagement.

Thanks to the event taking place in Tampa, many family, friends and WWE talent were able to attend.

Cena has been off WWE television since WrestleMania 36. He lost to Bray Wyatt that evening in a Firefly Fun House match.

The bout put Cena through a nightmare-like series of events that spotlighted many moments in his incredible WWE career.

Cena has turned much of his attention to his movie career in Hollywood over the recent years. That includes lead roles in Blockers and Bumblebee, along with Fast and the Furious 9 and The Suicide Squad sequel.