After last week's RAW In A Nutshell, will things improve on the way to SummerSlam this week? Let's crack open another Nutshell and find out!

It’s time for another RAW In A Nutshell, and after last week…I have to ask…will things improve on the way to SummerSlam?

Like, fine, I can admit that I did enjoy Nikki’s cash-in…but compared to both SmackDown and Money In The Bank before it…RAW’s return wasn’t so spectacular.

At least, that is my perspective…and I know I am not alone in the thinking. Of course, I also acknowledge that there are fans who completely loved last week’s episode…but they are not writing this one.

So…I ask again…will things improve on the way to SummerSlam?

Truly, they have to. I mean, it would be really hard to be worse.

But then…be careful what you wish for, right? Or don’t jinx things, because when you think it can’t get any worse…it could, I suppose.

So, as we are on the way to SummerSlam, there are plenty of things to do. We’ve had challenges issued…but no matches set as of yet.

So…let’s see if things will improve on the way to SummerSlam, shall we?

It is time for…

Let’s crack open this Nutshell and hope for the best!

A few ways to go with this…

Raiders versus AJ and Omos was good.

Damian Priest and Sheamus was good too.

Nothing exceptionally great, but some good matches.

I had a few ideas here…but really, there can be only one.

Eva Marie and Doudrop versus Tamina and Natalya.

Because, either Eva Marie IS still that bad, or Vince McMahon is trolling us.

Having a legit good young Superstar in Piper Niven do her dirty work…and then have Eva “cover” Tamina before getting kicked and taking the pin?

It’s got to be going somewhere better, right? I just cannot see the payoff…and I am not sure any payoff makes this truly worth it.

Drew is gonna kill you.

I really don’t have one.

That Razor’s Edge into some other slam, before Starship Pain? That should be Morrison’s finisher.

Looked nice, and looked far more impactful than Starship Pain. That one looks cool, but does not look like it’s a high impact move.

Keith Lee, losing for the second week in a row. I mean, he got to look better in the process…but after so long away, clearly building him up is not a priority.

Shelton Benjamin and Cedric Alexander. Losing a 2 on 1 handicap match to Lashley will do that. 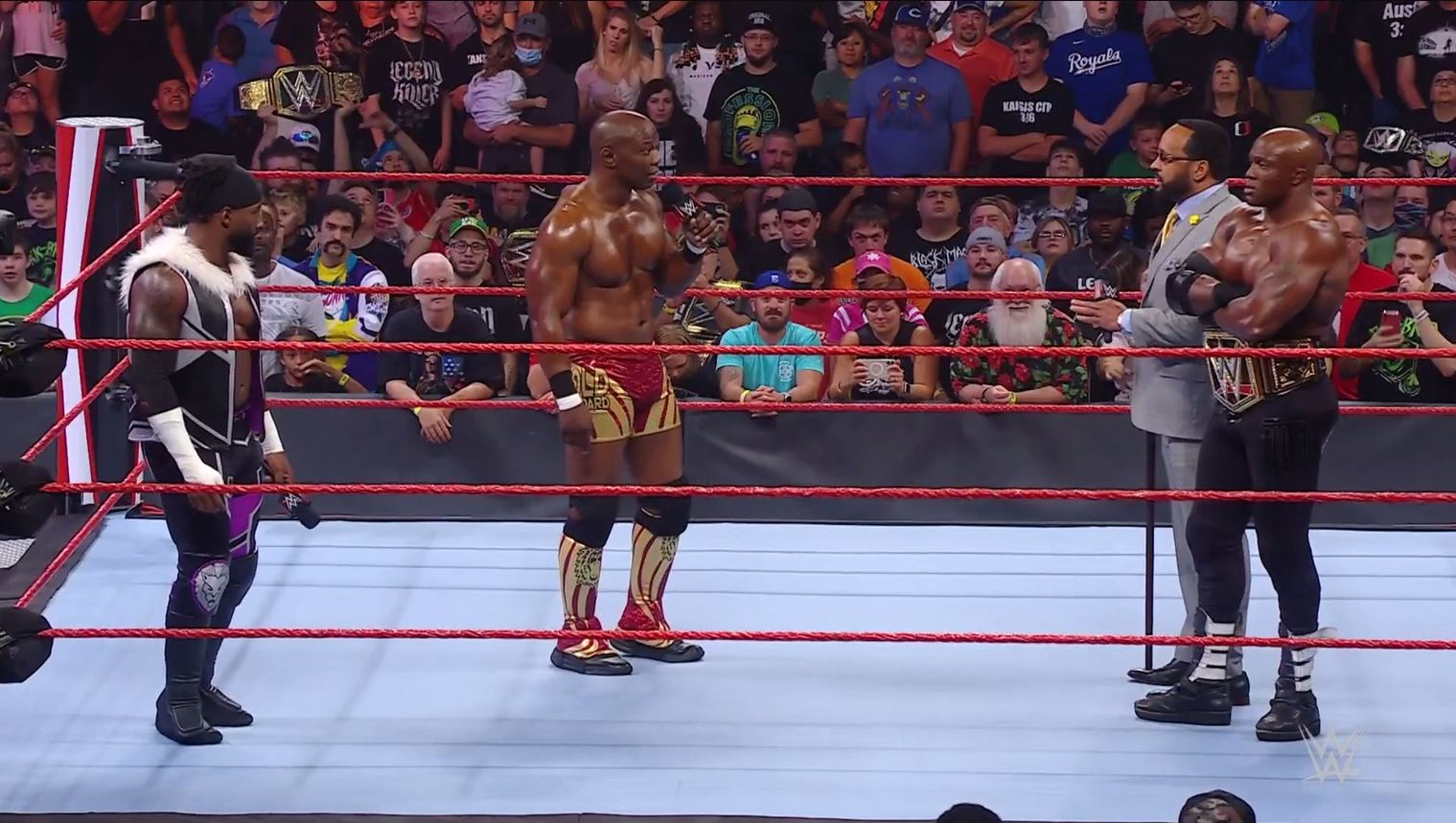 Also, Jinder Mahal’s “lawyer”. Because we can’t beat on Shanky every week…

Mansoor and Ali beating Mace and T-Bar. I feel like it’s a wee bit of an upset, anyways.

Maybe I am just not remembering something…but really did not feel like there was one tonight.

Jimmy the new guy gets this one.

As Natalya is being helped to the back (hope she’s OK), he said that Natalya carried the match for her team while Tamina got hurt.

Sure, it was a mix up, switched the names…but it’s not like these are twins and hard to tell the difference.

Why did it take WWE so long to try this, especially with Truth?

OK, in fairness, I know why…wrestling in the Performance Center in all it’s quiet made that clear.

The wrestlers talk to each other, as in calling their spots. Sorry, kayfabe is dead…

So…you can’t do mic’d up too often, because then the whole cat would be out of the bag.

I think for me I’d go with Natalya’s injury.

It did not look great, and with as much as she’s done for WWE over the years, you really hope this isn’t a major injury that would jeopardize her title reign.

Something else to chew on…but I can’t help but wonder if WWE isn’t using Nikki to make Charlotte even more hated, to set up an even bigger return pop for say…Becky?

Random, speaking of Nikki…but for my fellow ECW diehards, let me ask this. Am I the only one who feels as though Nikki kind of resembles Mikey Whipwreck?

Like, totally outmatched, yet week after week, they wouldn’t be denied.

Eva Marie…please, no more. Like, seriously…I don’t get what WWE saw in her to bring her back, and seeing some of the talent they’ve released in the same span.

Why bring her instead of keeping others? I don’t get it…

One concern…but with the super hero gimmick and getting very little offense before losing to Charlotte…is WWE killing Nikki?

Just feels like this goes one of a couple ways.

Is she a short time champion? My gut says yes.

Only way I think she hangs on to the belt a little longer than SummerSlam is if we see a return of crazy Nikki, versus A.S.H.

Some good undercard matches, so thumbs up for that.

I don’t love it, but I acknowledge that WWE is doing what they have to do to make Charlotte an epic and despicable heel.

Which, if I am reading the tea leaves, means she wins at SummerSlam, only to be foiled by the returning Becky Lynch.

Surprised that WWE could hold off that long…because a Lynch-Flair SummerSlam match is far more exciting than Flair-Nikki-Rhea Ripley.

Well, another RAW In A Nutshell is in the books.

Was it a better RAW than last week? Did things improve on the way to SummerSlam?

In a nutshell, I will say…somewhat. I do think this was truly a case of “it can’t be much worse”.

Plenty of room for RAW to improve…but things were a bit better, mostly. I think…

Tune in to next week’s RAW In A Nutshell to see if things can improve from here!