Paul Heyman took a jab at Christian signing with AEW, believing he ran away. And, the current list of big stars likely to miss WrestleMania.

Paul Heyman used Christian Cage signing with AEW as a chance to mock the former WWE superstar. Also, several big stars are not expected to be at WrestleMania 37.

Like previous Royal Rumble Matches, there were several surprises entrants. For the 2021 event, none bigger than Christian Cage.

For Cage, his career was seemingly over years ago. Due to issues with concussions, WWE would not clear him for return.

We have seen wrestlers have the same problems, but eventually get another chance inside the ring. Edge and Daniel Bryan are two great examples.

Seeing Edge and Christian, who seemingly had their wrestling careers cut short, have a moment inside the ring is what fans cherish. Unfortunately, we will not see a repeat as Christian signed a multi year contract with AEW at Revolution.

It seems like there is not a ton of heat on Christian by WWE for making the jump. But, during Talking SmackDown, Paul Heyman threw some shade on Christian.

Paul Heyman is simply a gem#TalkingSmack

“Let’s think about this,” said Heyman. “Edge, your best friend in this world knew he was going to become Roman Reigns’ target just to get into your head.”

“What did he do? He ran away before Roman Reigns could target him. How many of your ‘Christians’ need to convert before you realize it’s not smart to piss off Roman Reigns? You, Edge, have pissed off Roman Reigns.”

The top match of WrestleMania 37 is being billed as Universal Champion Reigns vs. Edge. If Edge can win, he walks away with his first title in a decade.

Meanwhile, Christian Cage might already have a program lined-up in AEW. He did not got a chance to speak during Dynamite, but teased a feud with AEW World Champion Kenny Omega. 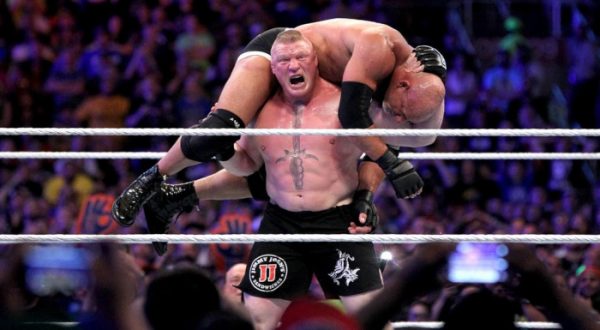 We are less than a month away from WrestleMania 37, but only two have been confirmed. This is not like WWE as they usually announce the marquee matches early and by now, most of the card would be complete.

We noted Vince McMahon has changed the card several times. With live returning, he wants to leave a lasting impression on the biggest weekend of pro wrestling.

While we are still waiting on majority of the card to be filled, some big names will not be booked. During the Wrestling Observer Radio, Dave Meltzer discussed a few high profile wrestlers that are not expected.

“No Goldberg, no Undertaker, no Lesnar,” said Meltzer. “So, you’ve taken some of the biggest attractions off and Edge does not replace them.”

“We’ve seen that. He just doesn’t. Edge looks old. Edge is gonna get a lot of criticism.”

Goldberg’s contract is for two matches per year and he already worked the Royal Rumble. On that night, he lost in a few minutes to Drew McIntyre.

Undertaker finally retired, with his last match taking place at last year’s WrestleMania. He officially retired at Survivor Series in November, which marked 30 years to the day of WWE his debut.

Brock Lesnar has not been seen or mentioned since losing in the main event of WrestleMania 36. The belief is he not under contract, but will return when travel restrictions are not as bad because of COVID.

What About John Cena?

While not mentioned by Meltzer, John Cena likely will not be working the show. Cena wants to be there, but he is filming a movie in Canada and production cannot stop for a few weeks for one match.

In the past, fans have complained how WWE books too many older superstars over younger talent. That does not seem to be the case this year and we will see the reaction from fans.