Sassy Southern Belle Lacey Evans has grossed out fans with a comment about WWE legend Ric Flair. But do you think it is a stroke of genius?

Lacey Evans managed to gross out WWE fans with her latest statements about Ric Flair. According to the Sassy Southern Belle, she is pregnant with Ric Flair’s baby. 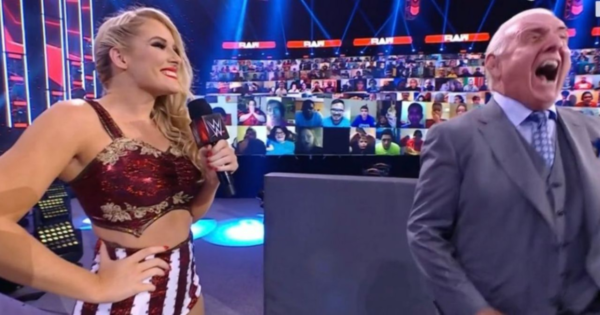 Evans has been embroiled in a feud with Charlotte, daughter of the Nature Boy and multiple time champion. Of course, their latest feud actually involves Charlotte’s father Ric.

Lacey has made it a point to keep Ric by her side in recent weeks. And it seems that the storyline continues with a big announcement.

During a scheduled tag team match, Evans noticeably avoided getting in the ring.

At one point, she grabbed a microphone and made a shocking announcement.

Lacey Evans announced she was expecting Ric Flair’s baby. Now, that puts quite the twist on the existing storyline.

Recent rumors also indicate that Evans is indeed pregnant. However, not with Ric Flair’s baby.

Lacey is still married to her longtime husband Alfonso. So if the news is accurate, then Lacy might be expecting her second child.

Ric Flair on the other hand is still happily married to his wife Wendy Barlow. The pair married in 2018 and are still going strong.

According to sources, the WWE found out about Lacey’s real life pregnancy before the show started. So, they decided to incorporate the news in an actual storyline.

But, we do need to mention that the pregnancy has not been officially confirmed by Lacey. Therefore, I do not rule out a fake pregnancy until that official confirmation comes.

Fan Response To The “Happy Announcement” 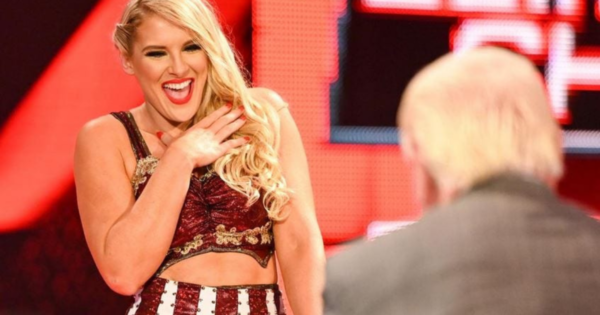 Fans quickly took to social media to respond to the recent storylines. Based on the reactions of most fans, it seems the WWE certainly delivered some shock value.

Wtf is this storyline between Lacey being pregnant by Ric Flair?

This is SOOOOO gross 🤮, this is why NXT is better then RAW!

Of course, some fans are speculating Lacey might not be pregnant at all. And they could be right, because it would not be the first time the WWE uses such a storyline for its wrestlers.

If the storyline does go ahead, it doesn’t seem like fans are massively impressed by it. In fact, one fan pointed out that the WWE already acknowledged Lacey’s real life family during a previous storyline.

The thing I don't get about the Lacey Evans and Ric Flair storyline is that Lacey's real life family has been established. Her daughter has been used in storylines.

This makes no sense. She should be defending titles. Not this rubbish.

Another fan had quite the funny remark. In fact, the fan pointed out Lacey is the second wrestler to become pregnant when she is about to face Asuka.

In addition to that, some fans reacted that Asuka might just be the fertility goddess. Well, there is certainly a baby boom going on!

Lacey's the second woman who got pregnant in the process of facing Asuka. No one is ready for Asuka!! pic.twitter.com/qJumfA1iV2

While there are a lot of negative comments, I’ve always liked Lacey and her heel ability.

If Lacy is indeed pregnant, we should hear more about it soon. For now, let’s just see where this storyline with Ric Flair goes.

Of course, if Lacey is pregnant, Ringside Intel wants to send a big congratulations to the wrestler. We are sure daughter Summer will be happy with a new brother or sister.

Now, it is just waiting for the official confirmation from camp Lacey. But if she is missing from Raw, the truth of the matter may be revealed sooner.