Carmella is banged up after a scary spot at the Rumble. And, don't be surprised if Roman Reigns & Brock Lesnar meet again at WrestleMania.

At the Royal Rumble, Carmella was banged up after a scary bump on the outside. Also, Roman Reigns and Brock Lesnar could happen again at WrestleMania.

Seemingly, everyone walked out of the Royal Rumble event last week without major injuries. But, some wrestlers were feeling the effects the next day.

It is likely Roman Reigns and Kevin Owens needed some rest after their physical Last Man Standing Match. The same goes for Carmella, even though her title match had no gimmick.

In her SmackDown Women’s Championship match against Sasha Banks, Carmella went for a suicide dive on the outside. The spot caused many people to squint as the landing looked rough.

It appeared that Carmella nearly landed on her neck and then her face slid across the ramp. Luckily, she was not injured as Banks seemed to slow some of the momentum.

Sasha making sure Carmella is okay after that dive ❤️ pic.twitter.com/NTu9zZs5iW

During After The Bell, Corey Graves noted how Carmella was a little banged up after the spot. Graves, who dates Carmella, put over her toughness by continuing the match.

“Anyone watching when that dive happened and Carmella went sailing through the bottom rope and I believe it’s known as a scorpion […] that’s what my kids call it when we watch fail videos,” said Graves. “When somebody’s feet hit the back of their head, it was not a good time.”

“She landed face-first and I’m pretty sure she kicked herself in the back of the head. She was a little banged up but she’s still alive, she’s still kicking, she’ll be alright.”

Problems With The Move

The suicide dive was rarely used in pro wrestling. Then, once lucha libre made its way the United States, the move become more common.

Nowadays, we have wrestlers in the 200-300 pound range hitting the spot. Basically, it has become common like a drop kick or clothesline.

We have seen several wrestlers land awkwardly when hitting the move. So far, nobody has been seriously hurt.

Still, WWE might want to consider having their superstars limit  use of the move. That is something we expect from 205 Live and not superstars double that size or those still learning the ropes. 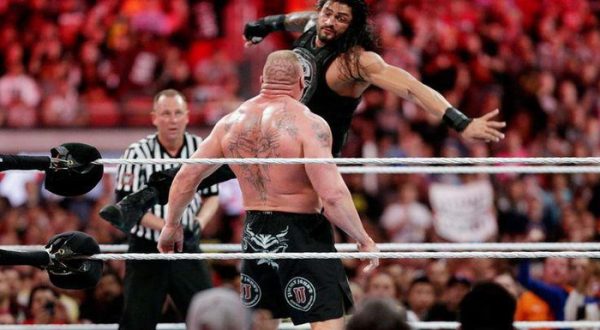 Fans have seen enough Brock Lesnar vs. Roman Reigns matches for the decade, but there could be more. In the Wrestling Observer Newsletter, they noted how WWE wants to book the match for a future WrestleMania.

For anyone wondering, that does not seem to be the plan for WrestleMania 37. There is talk Edge will challenge Reigns and Lesnar is not booked or even currently signed to WWE.

The most intriguing part could be what role Paul Heyman plays. Does he side with his long-time client Brock Lesnar or newest addition in Reigns?

These two massive superstars have battled countless times. The biggest part of the feud was Reigns’ lengthy battle to dethrone Lesnar’s 500 plus day reign.

They fought at WrestleMania, SummerSlam and even traveled to Saudi Arabia. With everything considered, it seems like only a matter of time before they meet again.

Would fans like another round of Lesnar vs. Reigns? Even with the change in attitude of the superstars, that seems doubtful.