Brock Lesnar's contract with WWE has expsired and he is now a free agent. Find out the current negotiation status between both parties.

Brock Lesnar’s contract with WWE has expired, but both sides are still talking. As they negotiate  a new deal, the free agent has plenty of options and fans are sharing their thoughts.

Brock Lesnar is no longer under contract with WWE according to PWInsider. He is now a free agent and can pursue other options outside of WWE.

“While the two sides have been working on a new deal, they have hit an impasse and have paused discussions.  his leaves Lesnar on the open market where he could, if he desires, field offers from outside WWE; whether it be AEW or other wrestling promotions, UFC, or even outside endeavors beyond combat sports.”

There is always the possibly AEW would be interested, but it would not be cheap. Although, AEW’s Chris Jericho and Lesnar have some backstage tension.

The UFC is always open to brining Lesnar back. Besides a few fighters, Lesnar remains one of the biggest pay per view draws.

Last time fans saw Lesnar, he lost to Drew McIntyre on night two of WrestleMania 36. In the process, he dropped the Universal Championship.

No word on when Lesnar’s contract expired. For months, he has been unable to leave Canada and travel to the United States due to travel bans from COVID-19.

Another layer to the story is Paul Heyman. After working as Lesnar’s advocate for most of his second WWE run, he now represents Roman Reigns.

More details on that relationship can be found, here.

In addition, Lesnar’s merchandise was removed with no explanation at the time. 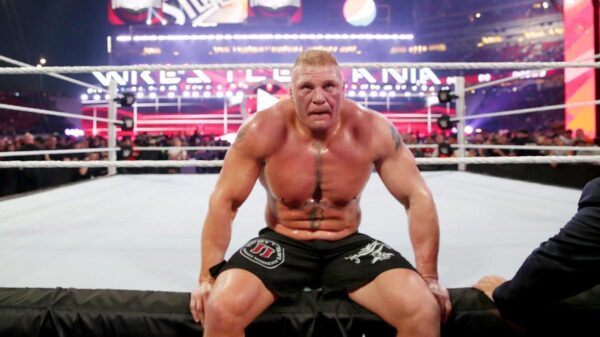 Brock Lesnar is currently a free agent – as per https://t.co/ytShgXE0eY.

Brock Lesnar is currently not under contract with WWE atm pic.twitter.com/kprXT8K4Lf

Dear Tony Khan: I will help you come up with a PowerPoint explaining why signing Brock Lesnar to fight Kenneth Omega is a winning business proposition.

Per PWInsider, Brock Lesnar is currently a Free Agent. This would explain why his merchandise has been pulled from https://t.co/n0lmPGqBuj

Brock Lesnar will end up coming back to WWE. There’s no need for him in the ThunderDome. Won’t be surprised if he’s the first person you see during the first time back in front of a crowd.

I can’t wait to see some idiot say “Brock Lesnar should go to AEW.”