Brock Lesnar's return to WWE is apparently getting close. Also, FTR are currently working under a handshake deal with AEW and have not signed contracts.

The return of Brock Lesnar could be happening at August’s SummerSlam. And, FTR have not officially signed with All Elite Wrestling.

Last time fans saw Brock Lesnar was in the main event of WrestleMania 36. On night two of the event, he lost the WWE Championship to Drew McIntyre.

Since then, there has been no sign of Lesnar or his advocate Paul Heyman.

During Wrestling Observer Radio, Lesnar’s status was discussed. Dave Meltzer noted how he should be back for August’s SummerSlam.

In the past, SummerSlam has been an event that Lesnar typically headlines. It will be interesting to see how WWE brings Lesnar to the United States.

Lesnar lives in Canada and there is currently a travel ban because of COVID-19. Hopefully, some restrictions will be lifted and talent from overseas can start making WWE tapings.

Not working for several months at a time is common for Lesnar. Therefore, fans are not shocked he is missing from TV after a major match.

Brock Lesnar is due back for SummerSlam. 😍

My prediction: Bobby Lashley beats Drew McIntyre and then we finally get Lashley vs Brock Lesnar at SummerSlam.

Why does WWE always include titles in feuds that do not need it?!

OMG !! Did I just see brock Lesnar is returning at #Summerslam

As for an opponent, that is not known but a rematch with McIntyre makes sense. SummerSlam was supposed to come from Boston, but that will not be happening.

Vince McMahon wants a crowd for the summer extravaganza, which means he might want to air the card outside of the Performance Center. When COVID-19 started spreading, WWE was forced to air their shows from Florida.

FTR Not Under Contract With AEW 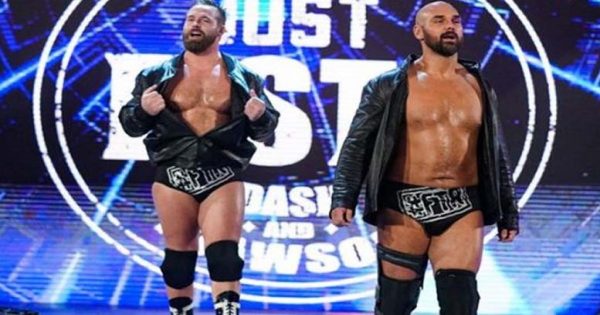 Two weeks ago, FTR made their long anticipated debut for All Elite Wrestling (AEW). Everyone thought Cash Wheeler and Dax Harwood were under contract to AEW, but that is not the case.

During a live Instagram stream, Harwood noted how they have not officially signed with AEW. Instead, both are working under a handshake deal.

With a lack of companies hiring due to COVID-19, FTR might not have many options. Meanwhile, if there was no virus, the two would be highly sought after talent.

FTR vs The Young Bucks is what I been waiting for #AEW pic.twitter.com/oht0tvJCuU

For a year and a half, FTR wanted out of WWE. They repeatedly asked for their release, only to be denied.

It seemed like WWE would simply wait until both their contracts ended. But, they were let go a few months ago.

FTR, using the name The Revival, were in a strange place in WWE. The talent was there, yet they were frequently given minor roles.

Still, in NXT the two found major success. Then, they were called to the main roster and won the tag titles on three occasions.

The problem was and remains WWE’s lack of attention to the tag team division. After several attempts, WWE basically gave up on FTR and even wanted to turn them into clowns.

FTR already has an angle going in AEW with The Butcher and The Blade. Plus, many fans are waiting for them to battle The Young Bucks after a year of going back and forth on social media.