AJ Styles Mad At Paul Heyman, WWE Looking Into Queen Of The Ring

AJ Styles was so upset at Paul Heyman, that he was moved from RAW to SmackDown. And, WWE was looking at doing a Queen Of The Ring Tournament.

AJ Styles being trade to SmackDown had to do with problems with Paul Heyman. Meanwhile, WWE looked into the idea of producing a Queen Of The Ring Tournament.

A few weeks ago, AJ Styles was traded to RAW for superstars to be named at a later date. Then, a few days ago, Paul Heyman was removed as the Executive Director of RAW.

Apparently, those two stories have a connection. Rovert, on Twitter, mentioned how Styles was not happy on RAW.

Styles had several issues with Heyman, including that they simply did not get along.

Therefore, due to these issues, Styles was traded last month to SmackDown. This was done to separate the two without turning the problem into something larger.

Dave Meltzer noted how Styles was not happy about Luke Gallows & Karl Anderson being let go. They, along with 40% of WWE employees, were cut due to COVID-19.

Vince McMahon made the final call, but Styles pointed the blame towards Heyman for his friends being released. The assumption is Styles thought Heyman should have fought harder to keep Gallows & Anderson.

A lot has changed with those superstars mentioned. Since The OC were forced to split, Styles just captured the intercontinental Championship.

Gallows & Anderson are rumored for New Japan Pro Wrestling (NJPW). But Impact Wrestling is interested and All Elite Wreslting (AEW) might also be in play.

Finally, Heyman remains in his role as TV talent. Basically, he would continue to be Brock Lesnar’s advocate.

WWE Looking Into Queen Of The Ring 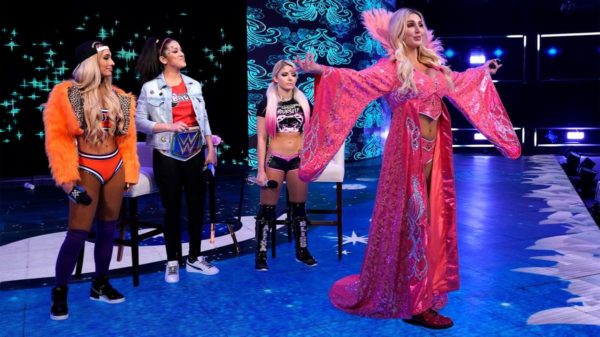 A popular event produced by WWE was the King of the Ring. Often times, the winner would be given a push to go with the crown and scepter.

There was speculation that WWE would hold the Mae Young Classic this summer. Instead, during Wrestling Observer Live, it was noted how that spot was set for the Queen Of The Ring.

Due to COVID-19, those plans, like many others have been cancelled or postponed indefinitely.

Originally, WWE want the tournament to run in 2019. Basically, it would be a follow-up to the Evolution pay per view from 2018.

At the time, the tournament would be the same format as the men’s version. Also, it would feature main roster superstars.

In short, do not be surprised if the tournament happens once things are back and running.

You know what i don’t want a “Queen of the Ring” Tournament at one point i did but after realizing that the tournament would only be done so Charlotte can be in it and win it kills all interests i have in the idea of a Queen of the Ring Tournament just stick to the MYC, Trips

#Repost @wrestlelamia
• • • • • •
Apparently, we were supposed to have a “Queen of the Ring” tournament this year but it’s been cancelled. Assuming Charlotte Flair was banned from competing, who would win?⁠
⁠
Sasha… https://t.co/eqtIoJUndr

So i heard WWE was planning a queen of the ring.🤔😌. We know a girl @wwe, to fit your role. pic.twitter.com/W11sC2AUhL

Can we please get a Queen Of The Ring event in the future. #queenofthering pic.twitter.com/DNTjhE25Hb