It appears as if the Mae Young Classic for 2020 is scrapped, and SmackDown is moving forward with a controversial angle on Friday night.

Many things have been canceled due to the coronavirus, and it appears as if the return of the Mae Young Classic was one of them.

According to Bryan Alvarez on Wrestling Observer Live, the event was going to see a return after being skipped in 2019.

The Mae Young Classic first debuted in 2018 with matches taking place over the summer. In the end, Kairi Sane defeated Shayna Baszler to win the first event title.

The following year, Toni Storm topped Shirai in the finals after a three-month tournament to win the event.

In 2019, Triple H confirmed that the original plans included holding the event in October of that year with tickets noting it would take place in November. However, they were eventually removed and no card was held.

Young, a WWE Hall of Famer, is considered to be one of the pioneers in women’s wrestling, competing throughout from 1939 until her retirement as an active wrestler in 2010. For years, the WWE featured her again beginning in 1999 alongside The Fabulous Moolah for several comedic segments and in-ring bumps.

As for the tournament, above all, WWE needs to make sure their talent are safe. Likewise, the same goes for fans; once they are allowed to return. 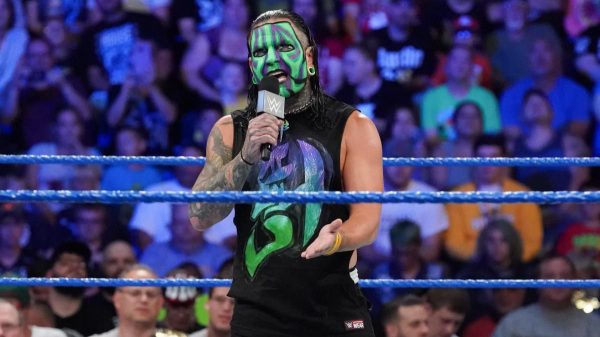 The feud between Jeff Hardy and Sheamus is headed for an encounter at WWE Backlash this coming Sunday, but before that, the two will have a controversial contract signing on WWE SmackDown on FOX this Friday night.

The segment has already been recorded, and it is expected to spark quite a bit of talk on social media and pro wrestling sites once it airs.

According to Sportskeeda, Sheamus will demand that Hardy provide a urine sample to make sure he is clean ahead of their collision. Then, “The Celtic Warrior” will bring security guards and a man in a lab coat with him to the interview segment hosted by Renee Young.

Excited to be back on #SmackDown tomorrow night! @WWESheamus says he plans on showing up & if he does,I look forward to seeing the fella! pic.twitter.com/FCrLC0A9wY

Meanwhile, Hardy, who has battled his own personal demons over the years, will respond to being called a “junkie” by Sheamus by throwing the sample at him after admitting his own problems.

.@JEFFHARDYBRAND is ready to tell his side of the story on #SmackDown.

What will The Charismatic Enigma have to say after last week’s shocking incident? https://t.co/tlRrbe4EkA

After that, the two are set for action from the WWE Performance Center in Orlando on WWE Network this Sunday night. BackLash will also feature Edge vs. Randy Orton, Drew McIntyre defending his WWE title vs. Bobby Lashley and Braun Strowman putting the Universal belt on the line vs. both The Miz and John Morrison.

In short, be sure not to the miss the event.