It's Royal Rumble time, which means we get a Royal Rumble In A Nutshell. The Road stats in Houston, so who punches their ticket?

It’s time for us to enjoy the first WWE PPV of 2020! As in, it’s the Royal Rumble. And what goes great with that? How about a Royal Rumble in a Nutshell! Tonight, the road starts in Houston. That road, of course, is the Road to WrestleMania. We will find out which Superstars have earned a title shot by the time the show wraps up. So let us dive right in and crack open this Royal Rumble In A Nutshell!

I will go with both Rumbles. There’s just something about the format that is so appealing. I was able to let my kids watch and they got hooked right into the women’s match. 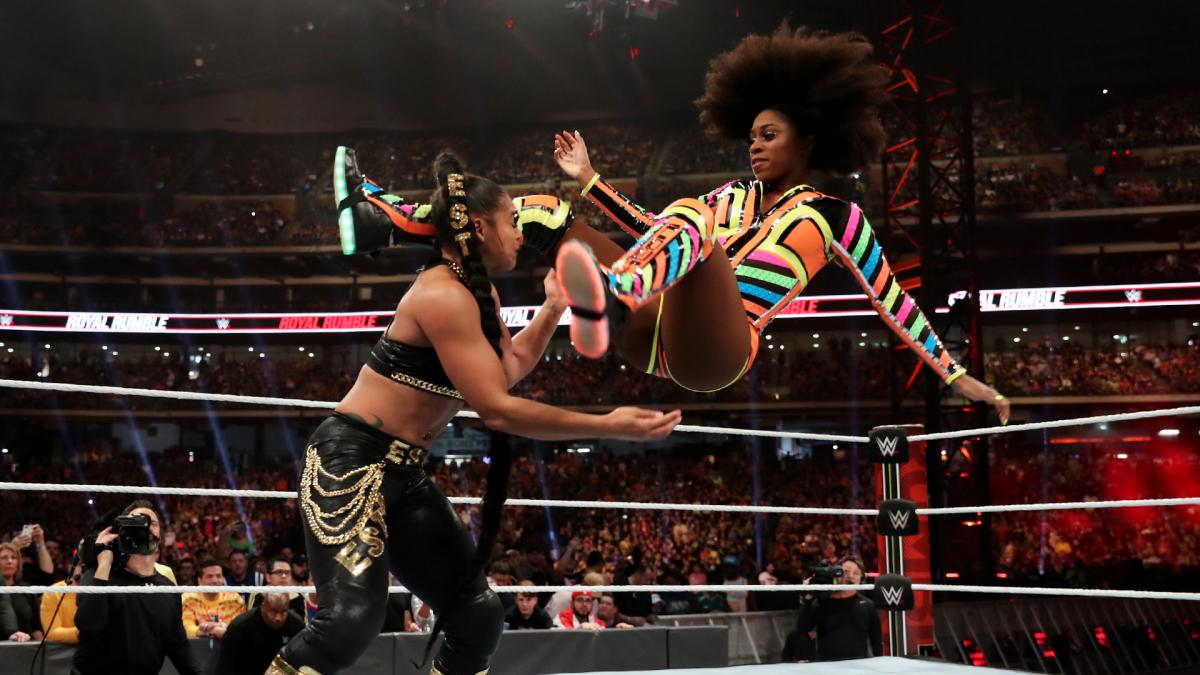 Both matches were solid. Maybe some gripes about who was in, or in certain instances at least…and I had issues with the women’s winner…but all in all, satisfying. Even though the early time for Brock did get kind of boring. When things got to the mid-point the match hit a whole new gear. Easy to see how things got set up for a lot of options come WrestleMania. 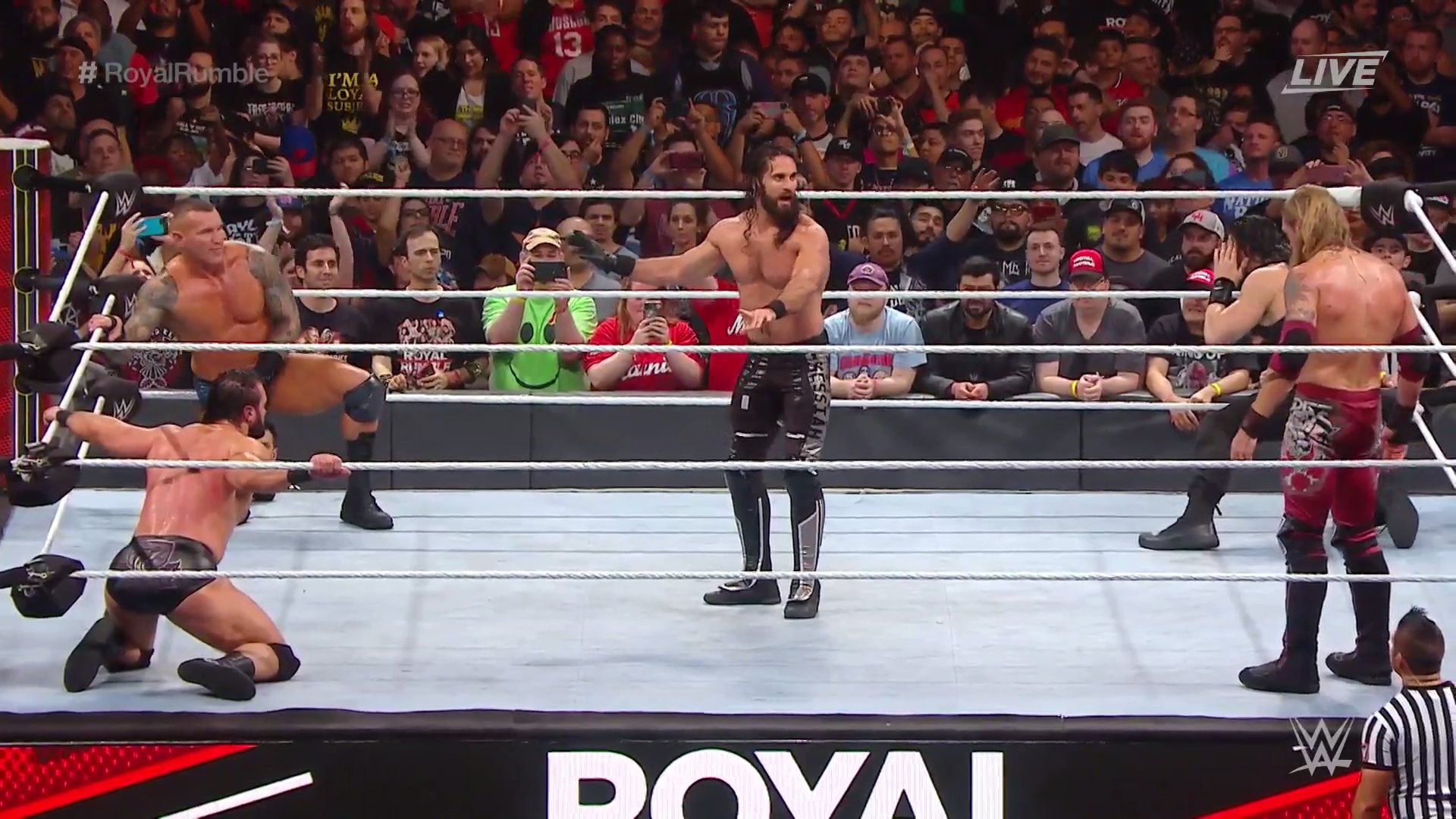 Well, this is a bit of a tough one. It’s an odd card with two Rumble matches and a few other bouts. I’d say the two in bad spots were probably the two women’s title matches. That said, both were not bad, so I really don’t think there was a ” bad” match this evening.

I don’t care about this match really. I’m ready for the men’s #RoyalRumble

On the women’s side, Charlotte Flair, since she won the Women’s Rumble. 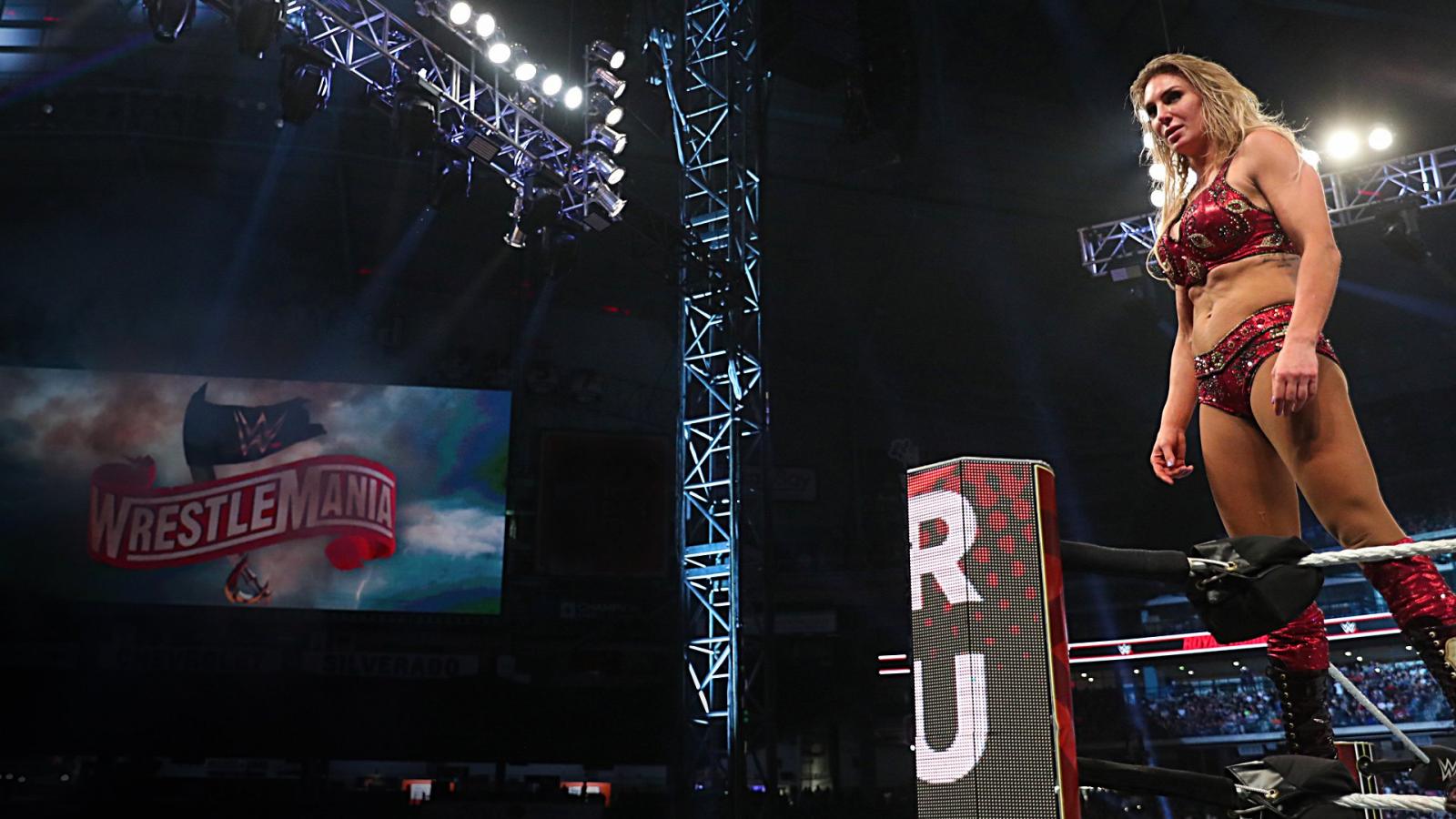 And on the men’s side, Drew McIntyre. He started his evening eliminating Brock Lesnar, and by winning the Rumble, he can take a shot at Lesnar (or The Fiend) come April.

He fought his way back to @WWE, and now he’s officially on the ROAD to #WrestleMania! 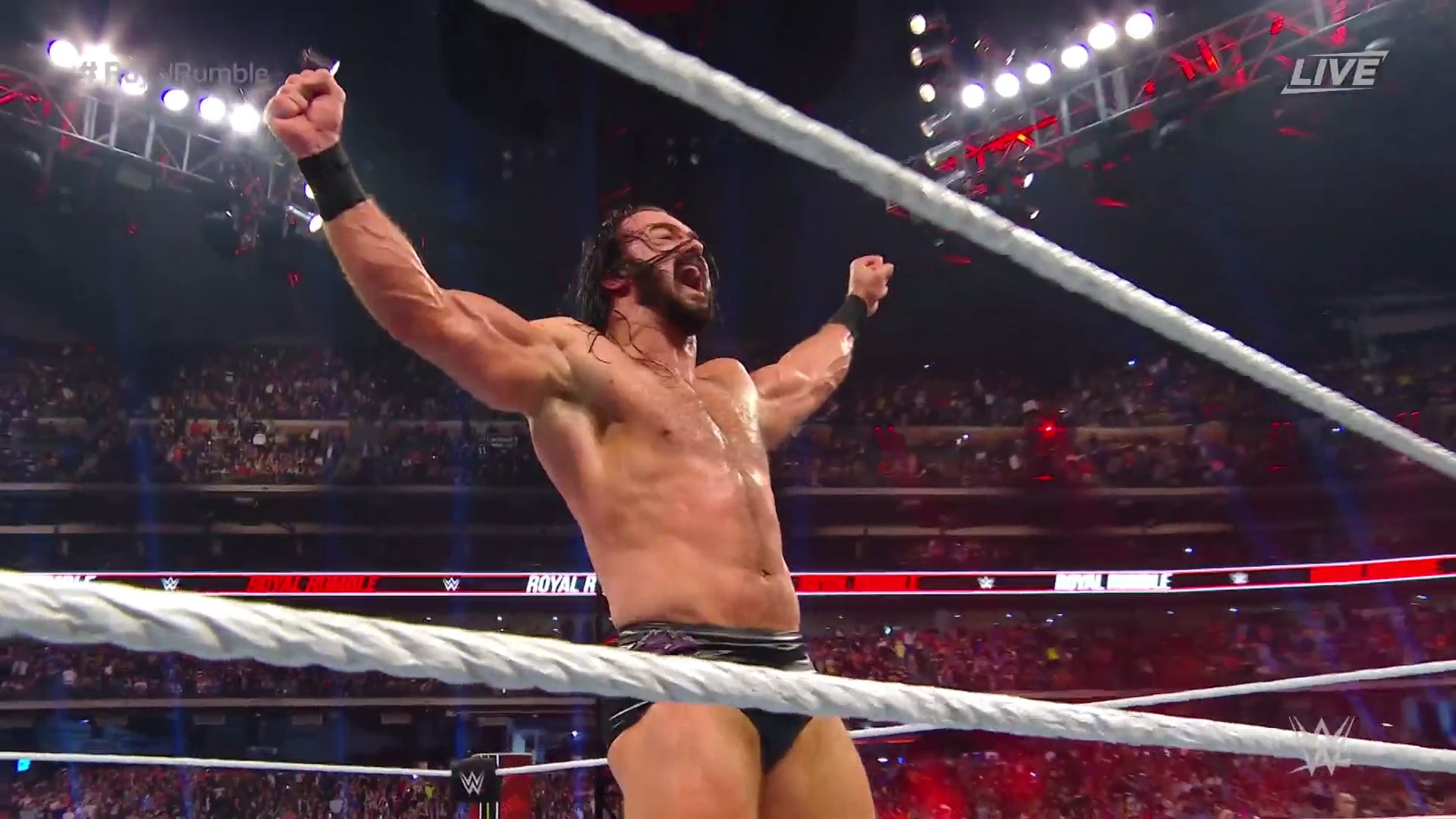 Honorable mention to this guy…who many figured had no shot in ever returning to the ring, and for good reason! 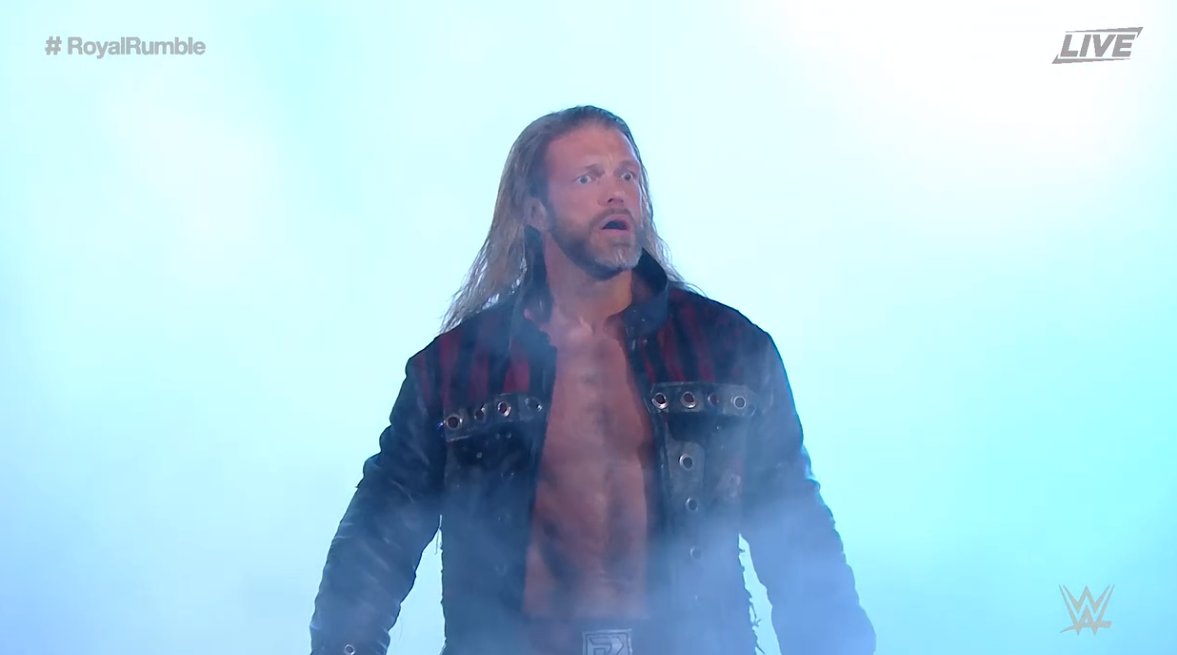 The strap match was brutal, so pick any of those shots. 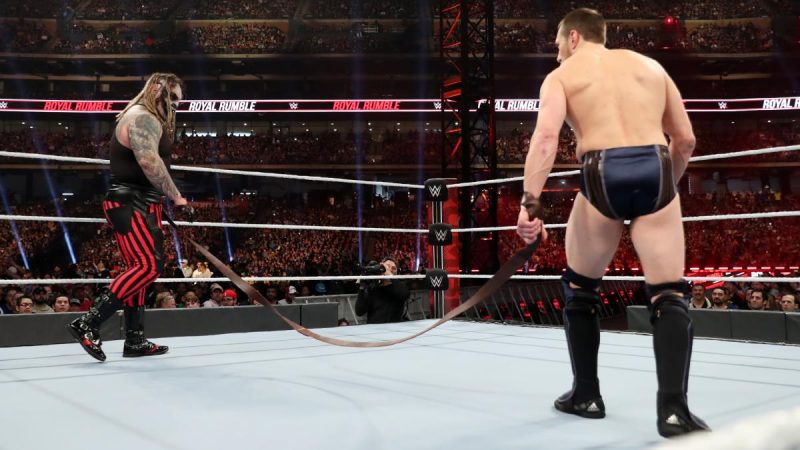 Or how about this one, which made Beth Phoenix a red headed mess for the majority of her Rumble time this year…

This is how Beth Phoenix cut her head open

She smashed it on the ring post, you can hear it smack #RoyalRumble pic.twitter.com/bgYCtJ5dOT

Santina Marella. I mean…it eliminated itself. Wasted spot, but more on that later.

Shayna Baszler making it to the final two and NOT winning? That shocked me. Baszler was a rumored favorite to win, and having her win to face Becky Lynch made a ton of sense. That said, we may still get that bout sooner or later…it just won’t be because of a Baszler Rumble win.

How long Lesnar lasted to start.

How he got eliminated. And how he sold the Claymore…

How far McIntyre tossed Ricochet out of the ring.

And…the rumors were true! Edge is back in a WWE ring for the first time in nearly a decade!! The pop he got was absolutely huge.

If you didn’t get chills hearing Edge’s music again you don’t have a soul. #RoyalRumble pic.twitter.com/p0A96lUIoh

Cutting away from @EdgeRatedR‘s first Spear back after 9 years should be the thing that finally gets Kevin Dunn future-endeavored.#RoyalRumble

I have to go with Otis and the women’s Royal Rumble. I completely discounted the use of Otis as a way to save Mandy. That first save in particular was kind of hilarious. Even if it didn’t end well… 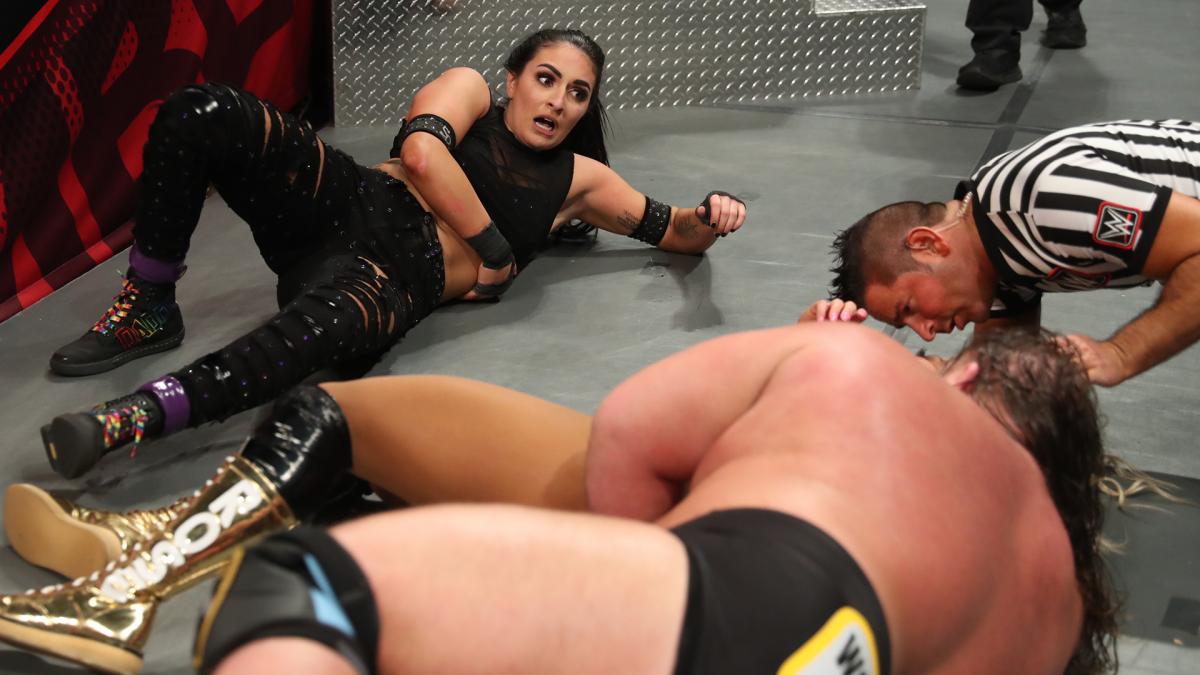 Not a wrestling point here at all, but the day was a dark one for sports fans around the world. Kobe Bryant, just 41, along with his 13 year old daughter and seven other souls, perished in a helicopter crash outside Los Angeles earlier today. I met him before he made it to the NBA, as Bryant used to practice and hang around at my college’s gym. He was always a pleasant person and it’s telling that even WWE, where he didn’t have much if any interaction, offered an in memoriam for him. 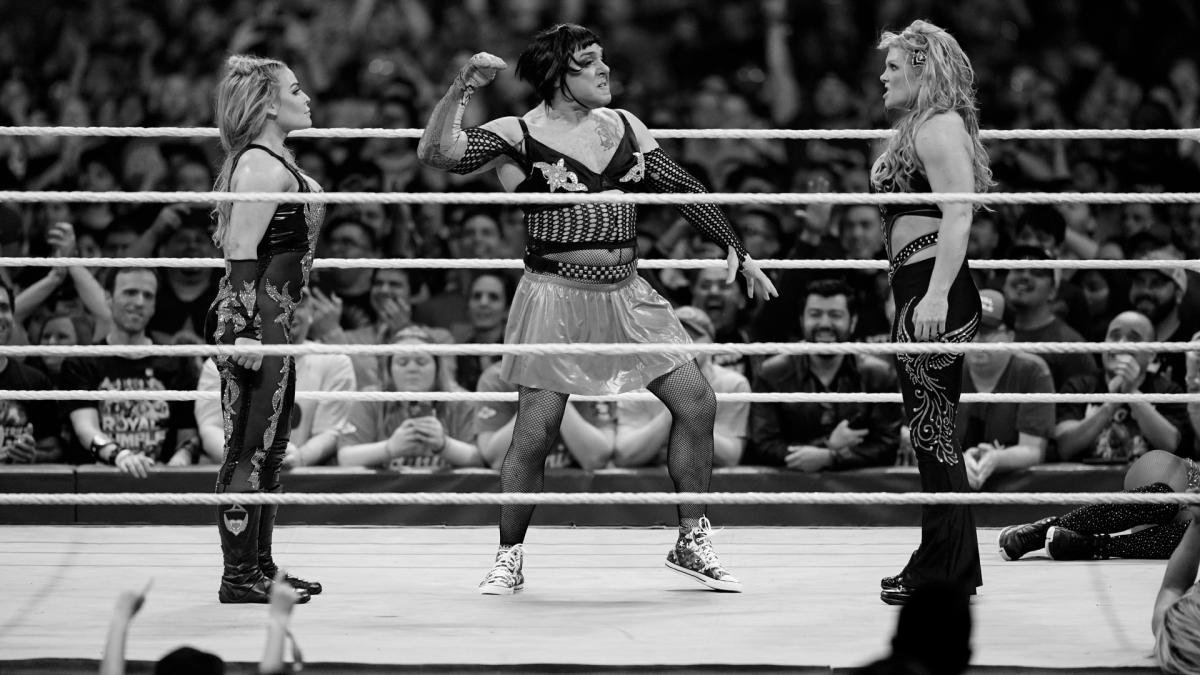 Maybe it’s me being overly sensitive, but in this day and age, I question the logic behind that call. I mean, why no Sasha Banks? Or any other options, really?

I mean, I didn’t overly enjoy Kelly Kelly, but at least she was a legit woman and a former champion, so she had some reason to be there. Giving such a choice spot to a comic entrant who then eliminated himself? Such a waste.

And while I am on the women’s Rumble…I hated Charlotte winning. To me, that’s uninspired booking. You had Baszler right there…forget trying to swerve us because it was out that Baszler was a favorite to win it. She offered a more compelling ending, to be honest. Plus, to have someone like Shayna come in and win, while still theoretically a member of the NXT roster? That could have been huge.

I really didn’t want Shayna to win but like CHARLOTTE FLAIR?!? U HAVE OTHER WOMEN IN THE ROSTER!!! USE THEM @WWE!!! @NaomiWWE had the biggest pop in that rumble and u can see the fans are behind her!! SMH I HATE U @VinceMcMahon #RoyalRumble pic.twitter.com/2L032jMqSe

The Rumble matches generally always deliver. This year was no different. From Lesnar’s streak to start it, to watching Keith Lee give him a great challenge (if only briefly, sadly)…and so many more.

All in all, a solid show I think.

For the most part, the non-Rumble matches were good. Some felt more like filler, but all were decent enough.

The women’s Rumble, I wish WWE elevated someone different. Charlotte did not need to go over there. She doesn’t need the boost of a Rumble win. Baszler would have been the right choice, even if they can get to Baszler/Lynch through other means. Also, having Santino back for that was a waste. Not a terrible women’s match, but it could have gone a lot better with a few tweaks.

I did like the NXT representation in that one though.

On the men’s side, Michael Cole said it best-it was a tale of two Rumbles, with Lesnar dominating and then McIntyre eliminating The Beast and ascending to the top spot. I think the men’s finish was generally done right, and should have been a similar ending for the women. With the men, I think plenty figured with Rollins and Reigns and Orton in there-all prior winners-one of them would get the call over Drew. Glad WWE is going to see what McIntyre can do…especially if we can get NXT babyface Drew.