RAW In A Nutshell: Heating Up As SummerSlam Approaches

A week after a big reunion, RAW gets back to the task at hand. SummerSlam is two weeks away, so it's all about pushing the hype.

This one has sort of just snuck up on us, hasn’t it? SummerSlam is just about two weeks away, and there is still plenty of the card left to set up. Things are certainly going to be heating up as SummerSlam approaches, but what can fans expect? Tonight on RAW, we already know we have Becky Lynch facing Alexa Bliss, though in a non-title match. There’s also a Samoan Summit being advertised between Samoa Joe and Roman Reigns, and that just feels like a similar vehicle as the typical contract signings…meaning nothing good can come of it, right? Let’s crack open this Nutshell and find out!

If I am looking at this from a purely match-based perspective (and it is best MATCH of the night, right?) then give me the triple threat match for the RAW Tag Team Championships. My one beef here is (and you’ve heard me say it before, if you’ve been reading me for a while), I hate the triple threat format. I prefer the old ECW three way dance format, where there are eliminations, not one pin for the win.

Why? Because I dislike when the champions don’t need to be pinned to lose their titles…as was the case tonight. 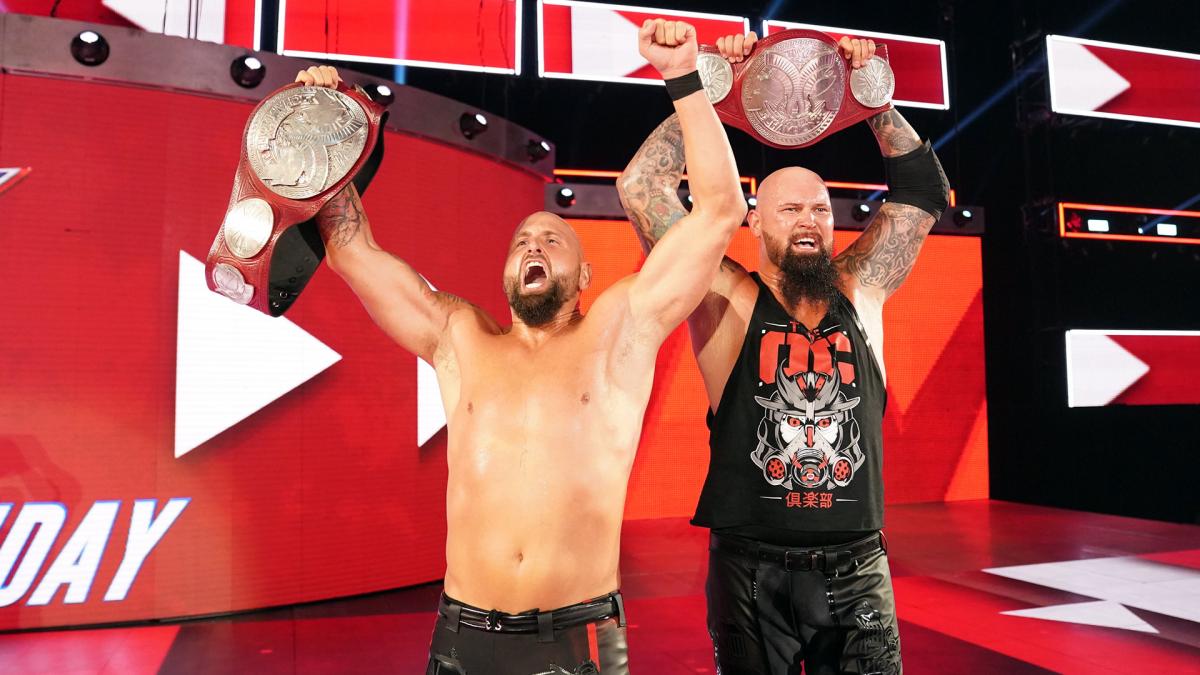 I am sure this will lead to a re-match at SummerSlam though, so it all works out.

In a non-match capacity? The main event segment worked. We transitioned from Dolph Ziggler and Seth Rollins, to Rollins getting absolutely destroyed by Brock Lesnar, with  The Beast doing everything he could to impale the challenger onto a steel chair. 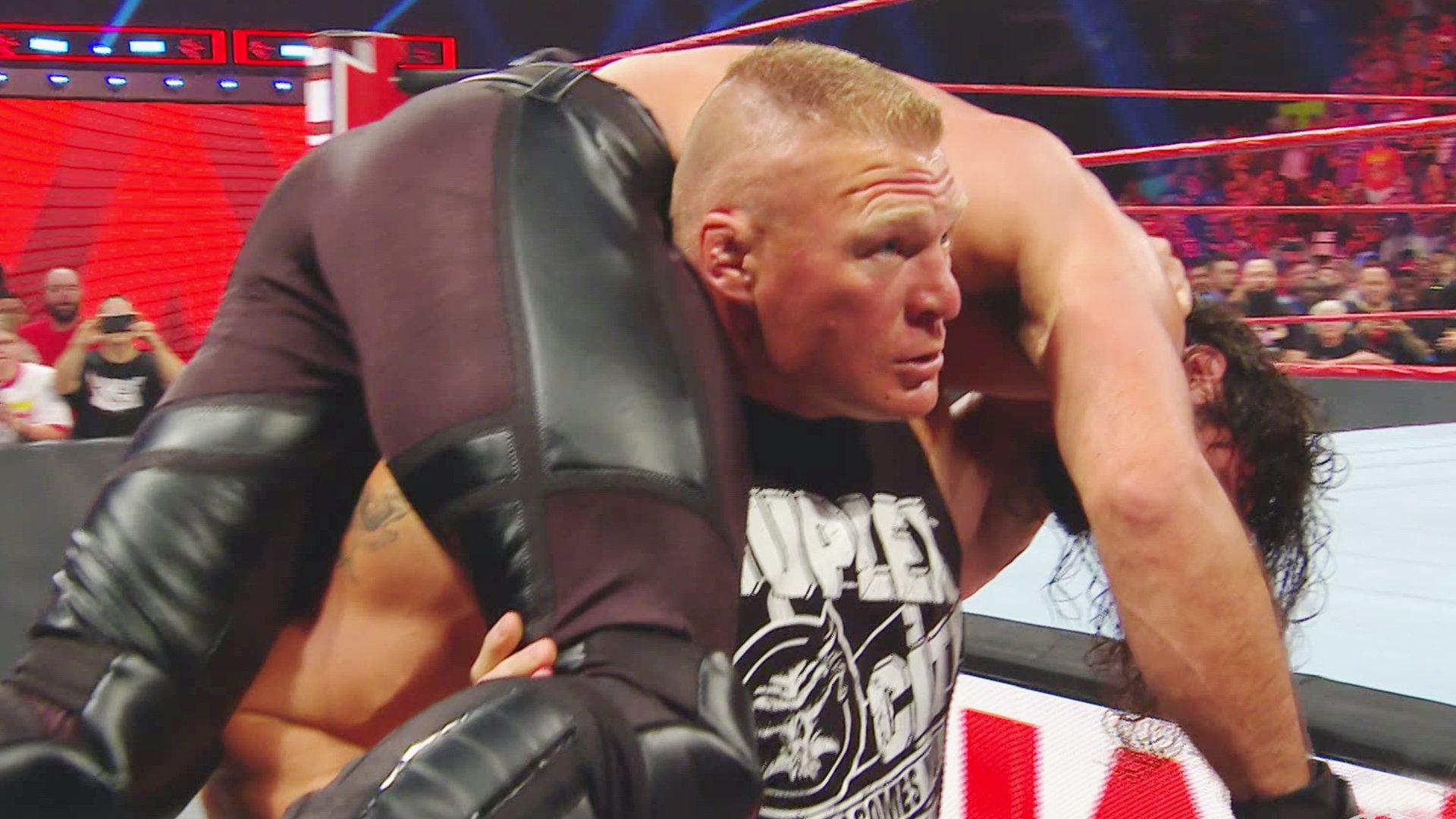 That then transitioned into a backstage attack, or rather, series of them. First we saw Joe, along with Gallows and Anderson, attacking Roman Reigns and The Usos. Then Brock pulled Rollins from the ambulance and attacked more.

We then went to the Samoan Summit, which ended up being a brawl between Jimmy, Jey, Roman, Cedric Alexander, the Good Brothers, Joe and Drew McIntyre (and I may be leaving someone out, even).

Why do I have it here, even though it was sort of a chaotic mess? Because it made me feel like I was watching a RAW from a while back (minus the minutes-long overrun). Back then, you knew almost never to tune out that final segment, because it was a sure thing something crazy could happen. Tonight felt along those lines, at least to me.

The opening…er…thing…involving the mixed tag match that was really, I guess, just an odd way to get the 24/7 Championship sort of scheduled to be on television? It was largely a waste…we’ve gotten used to the seeming randomness of that title. A scheduled match, even a grudge match with a back story, just seems odd (more so because Drake’s wife is someone we’ve never seen wrestle, and there had been no real build toward her stepping into the ring)

I think the big one for me was Cedric Alexander. I mean, think about it-he’s another 205 Live alum who has leapt to the main roster and done well for himself. Ali would be the first one, and we do have to keep Drake Maverick in that conversation too. And now, Cedric Alexander is rising to the occasion.

I don’t know who is behind these guys getting the opportunities, but it’s the right call. Clearly WWE has talent on 205 Live. Want proof? Just go watch the last couple Cruiserweight Championship bouts that made it onto WWE PPVs. I even named one a couple months back as my match of the night for that particular PPV.

Honorable mention to Anderson and Gallows, as they claimed tag team gold yet again. It’s amazing what can happen when a good team signs new deals (and they took the belts off a team that was getting a push, perhaps to entice THEM to re-sign as well).

How about we go with Lesnar and his repeated F-5s to Seth Rollins? The one on the outside onto the ring post? It looks tame compared to the several that Rollins took on a steel chair in the middle of the ring. 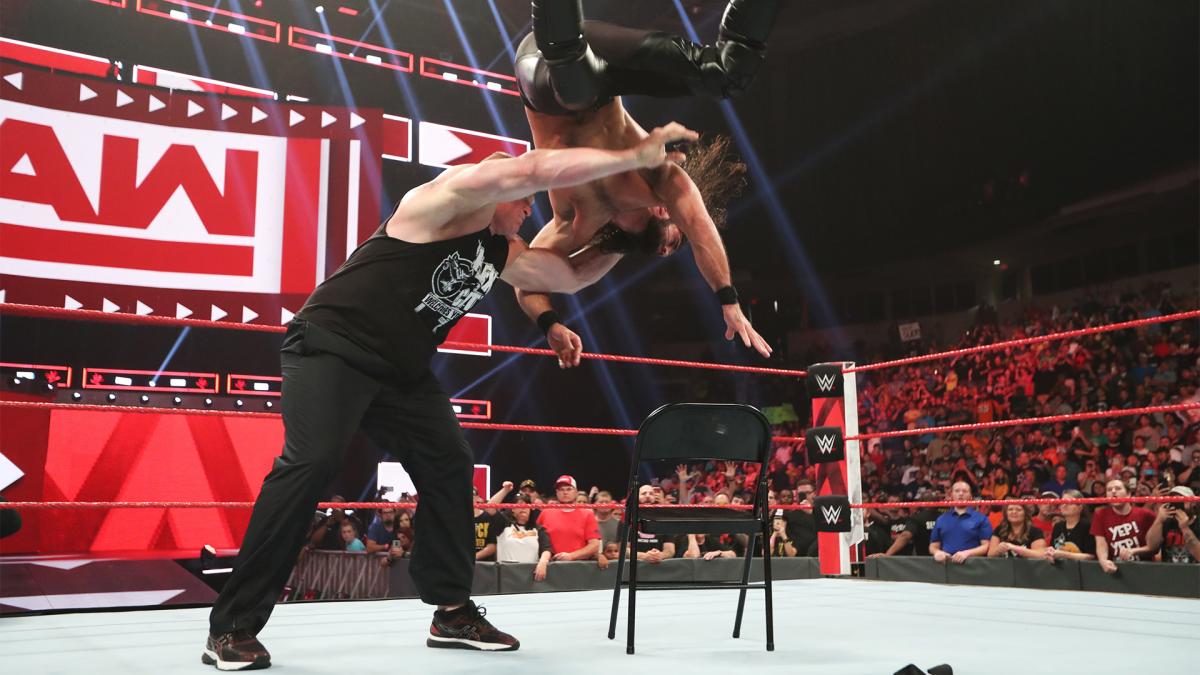 Or, the one he took on the stretcher, after Lesnar removed him from the ambulance. 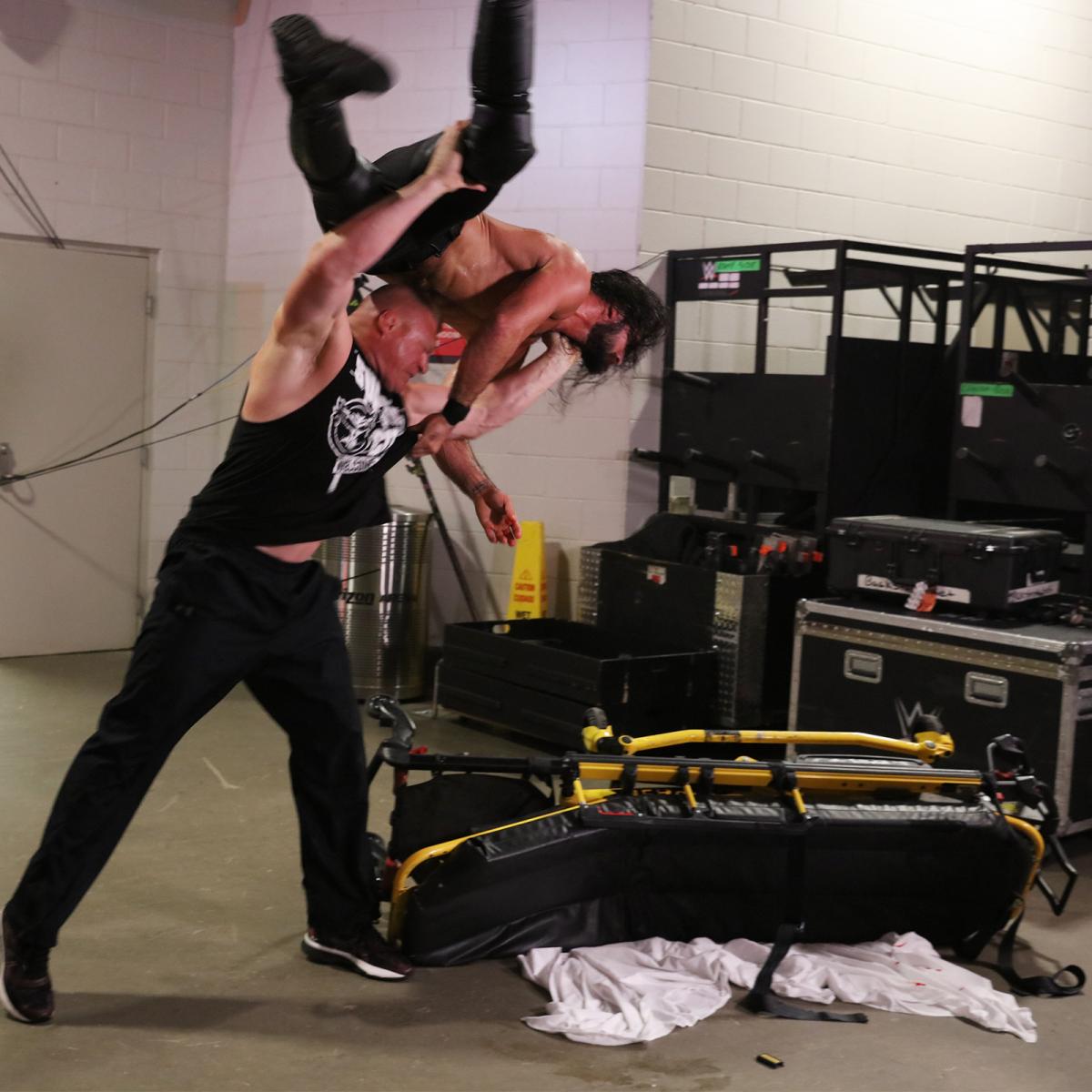 But then, in the main event slot, we have Cedric Alexander leaping from the top of the LED board onto a mass of humanity. 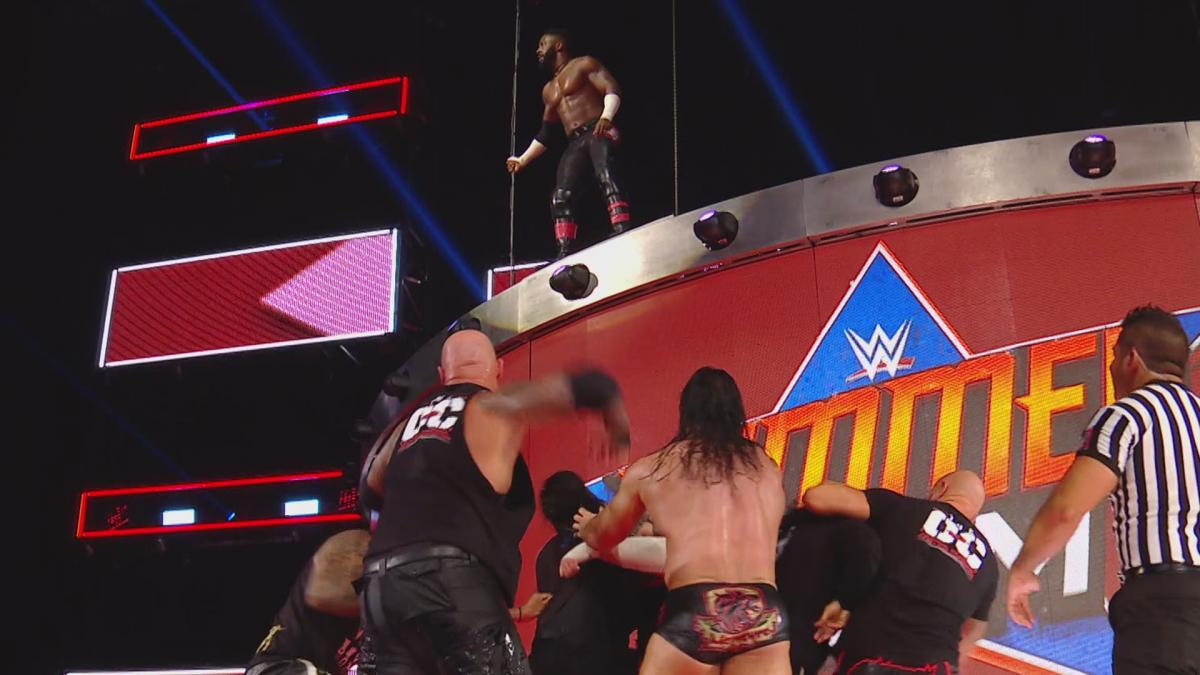 Another week, another set of jobbers for the Viking Raiders to destroy. 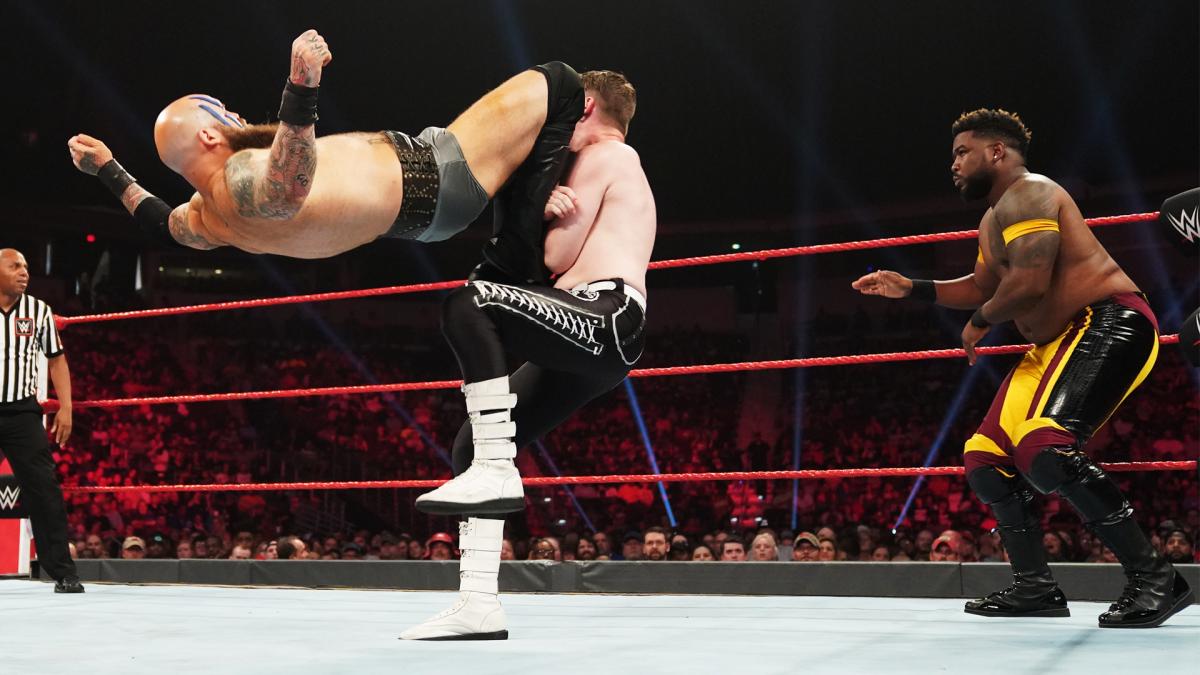 I don’t know if it’s really an upset, or more like upsetting (and nauseating). What the heck is WWE thinking by having Mike Kanellis lay down for his pregnant wife to pin him, thus becoming 24/7 Champion? 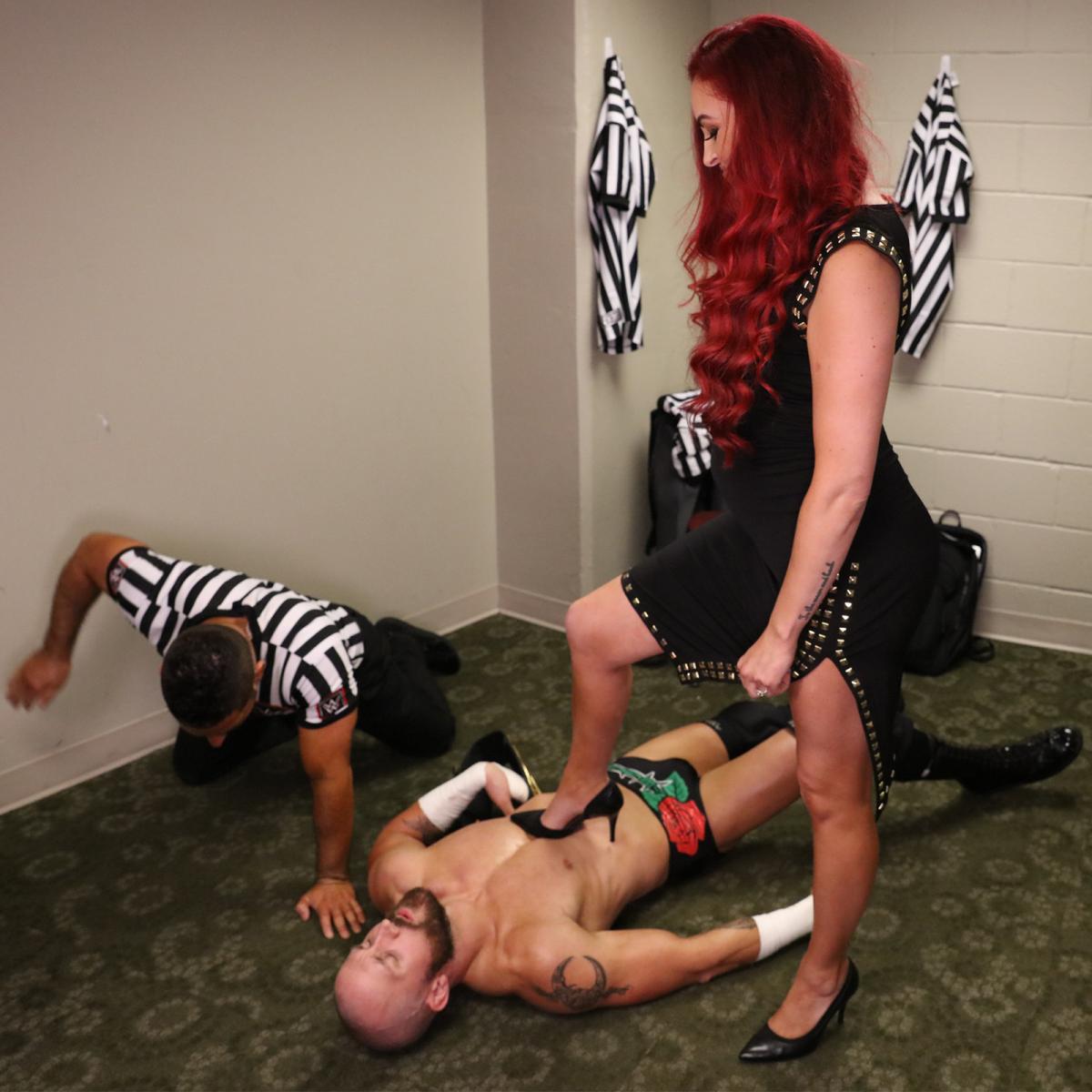 I mean, in the interest of Shark Week, is it just me or did WWE just make that title jump the shark?

Yes, we had heard Brock Lesnar was advertised, or at least scheduled, for the next couple shows between now and SummerSlam…but it was sort of overlooked. I honestly forgot, and it was kind of an afterthought. This is the downside of a largely absentee champion… 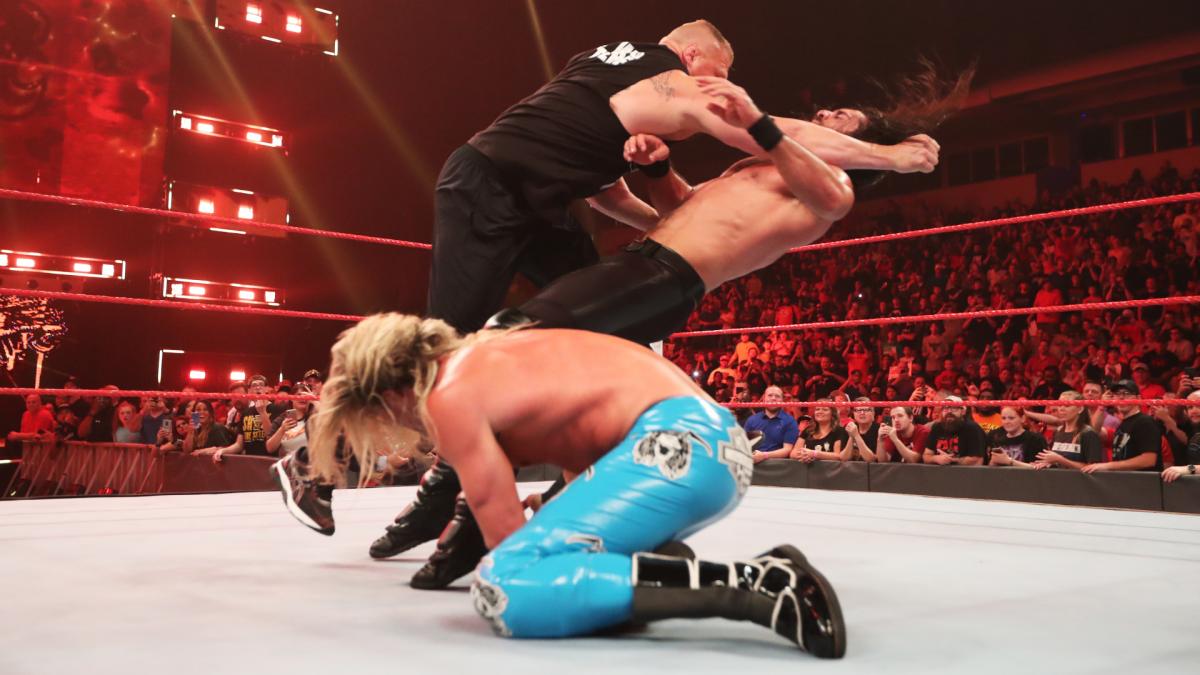 So, of course, I wasn’t expecting Lesnar to come down and savagely beat the daylights out of Rollins, softening up the challenger less than two weeks ahead of their Universal Championship bout in Toronto.

Ricochet is amazing in most things. Not so much with the mic skills. WWE needs to work on that…or get him someone to speak for him.

Now we have WWE going with implying that Dawkins might be Maria’s baby daddy? I guess that’s interesting…

Not that Brock Lesnar needed to give fans any more of a reason to hate him…but if you want to see someone get a tremendous amount of heat on himself? Tonight, Lesnar certainly seemed to put on a clinic.

Seems odd that we only got a brief Strowman siting tonight. I honestly thought he’d be inserting himself in the main event segment or something.

Once again, not a fan of the Maria Kanellis stuff the past few weeks. Adding the 24/7 Championship to her antics? Does not help at all. 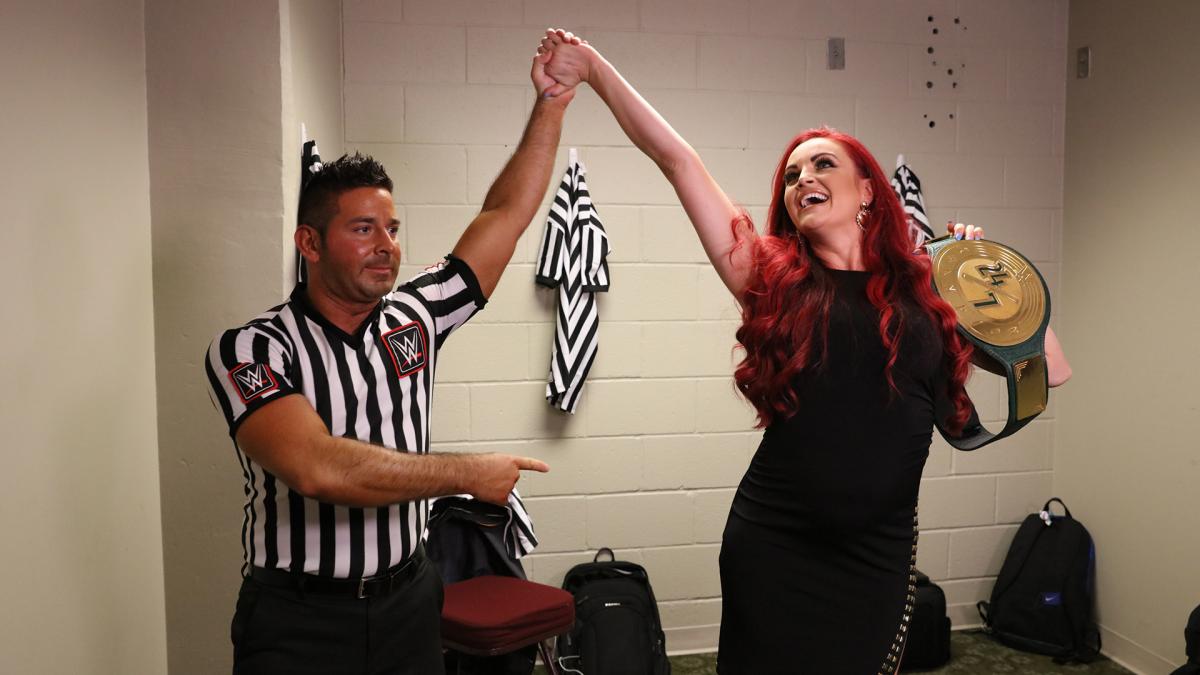 Plenty of them tonight.

The tag match (see, WWE can have good tag matches!)

The heel heat for Lesnar

The last 45 minutes of RAW. Felt like old times.

Not much to say here that I have not already said. I feel that, for the most part, we got a crazy good RAW. Maybe someone stepped things up, since while last week’s was entertaining, it was light on SummerSlam.

What I am curious about is what the closing segment leads to. We already can expect Samoa Joe and Roman Reigns to clash, but in the next few weeks, where do we see the tag title matches going? Also, who gets Cedric Alexander at SummerSlam? Is it possible he pairs up with McIntyre?