Good news if you love the Randy Orton/Matt Riddle pairing, a big push is coming for R-K-Bro. Plus, a WWE legend threatened Vince McMahon.

According to a recent report, WWE fans should gear up for a big R-K-Bro push coming. Seems like WWE officials are pretty high on the Randy Orton and Matt Riddle tag team.

PW Insider recently reported that the WWE has major plans to push the new tag team, R-K-Bro. This week on Monday Night RAW the duo picked up their second win by defeating Jaxson Ryker and Elias.

Orton and Riddle also beat Cedric Alexander and Shelton Benjamin the week before. As per the report, this new tag team isn’t a short-term thing.

Sounds like a RAW Tag Team Championship run for R-K-Bro is in the cards. The report also stated that the company will be releasing some merchandise for the tag team, shortly.

R-K-Bro is on a road to tag team success in the WWE. Vince McMahon must approve.

Speaking of VKM, the 75-year-old continues to call the shots in the WWE. A legend recently relayed a story of issues he had with McMahon while working with the company.

WWE Hall of Famer Kurt Angle recently talked about his relationship with Vince McMahon in 2006, during his The Kurt Angle Show podcast. This is right before he left the WWE. 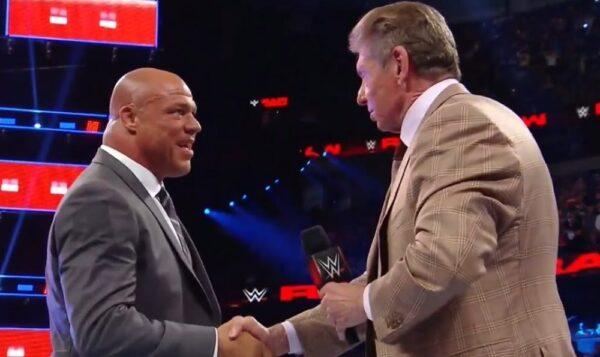 Due to years of competition, Angle was significantly banged up. Plus, he was suffering through multiple injuries.

He was hurting and feeling more and more frustrated as the days went on. He was unhappy with the WWE and started sending threats to the Chairman.

As Angle puts it, he was in “bad shape”. He had a neck and shoulder injury, plus a torn hamstring, groin muscle, and abdominal muscle.

Kurt went on to state that his issue with painkillers wasn’t any better, either. The WWE legend added that his relationship with Vince began to dwindle and was strained.

Kurt Angle stated he felt “erratic” and “out of control”. He began leaving VKM voicemail messages with threats.

What Lead To Kurt Angle’s 2006 Departure

The compounded tension between the two all came to a halt during a production meeting. Angle felt as if his messages and everything had gone too far, but needed to “show” his injuries.

He pulled his pants down to his ankles at the production meeting. Vince was in the front, and others were in the back.

Kurt walked towards VKM showing him the extent of his groin issues, with his underwear off. Everything in that area was black from the injury.

Angle was desperate for some time off. He asked for a one-on-one with Vince at WWE’s headquarters and was granted the meeting.

Angle noted he decided to leave the company at that point. VKM granted his release in August 2006, a couple of months after the meeting.

Things got a whole lot better over the years for Kurt Angle. He was able to recover from his injuries and get his life in order.

Angle moved on to add accomplishments from other promotions to his wrestling resume. He also returned to the WWE in 2017 for a Hall of Fame Induction.