We have a loaded RAW In A Nutshell headed our way, with the Scottish Psychopath seeking retribution, against Retribution's remaining members.

On this week’s RAW in a Nutshell, the theme is incredibly obvious-after last week’s conclusion, the Scottish Psychopath seeks retribution.

And, the Scottish Psychopath seeks Retribution. Or, rather, the remnants of that faction.

After all, Mace and T-Bar jumped Drew McIntyre to close RAW…all while MVP looked on, approvingly.

So, all things considered, is it really shocking that the Scottish Psychopath is seeking Retribution? No…not it is not.

Of course, retribution isn’t only on the menu for Drew. With Charlotte Flair back in the mix, things will get interesting as the RAW women settle on who challenges Rhea Ripley at Backlash.

Plus, will we see more interesting antics with Nia Jax? She had a rough RAW last week, so it’s fair to wonder if that continues.

And, it’s worth mentioning, it’s our first RAW since the latest in what is becoming an annual tradition…roster cuts.

But, that’s all in the past…this week is primed for action, and it all starts here and now with…

Let’s crack it open and see what happens!

For me, it was Drew’s match.

Well, it became a tag match for Drew McIntyre and Braun Strowman, as the two faced off against Mace and T-Bar, formerly of Retribution.

Was not enjoying this for the epic wrestling. Nope, not even close.

Instead, a few other things did it for me.

The violence, for one. Some hard shots.

Trash talk for another, with all four men jawing…my favorite being Dijakovic, to Strowman: “You’re bleeding, sunshine”.

But, the cherry on top? That would be the masks being ripped off and then used as weapons against Retribution. 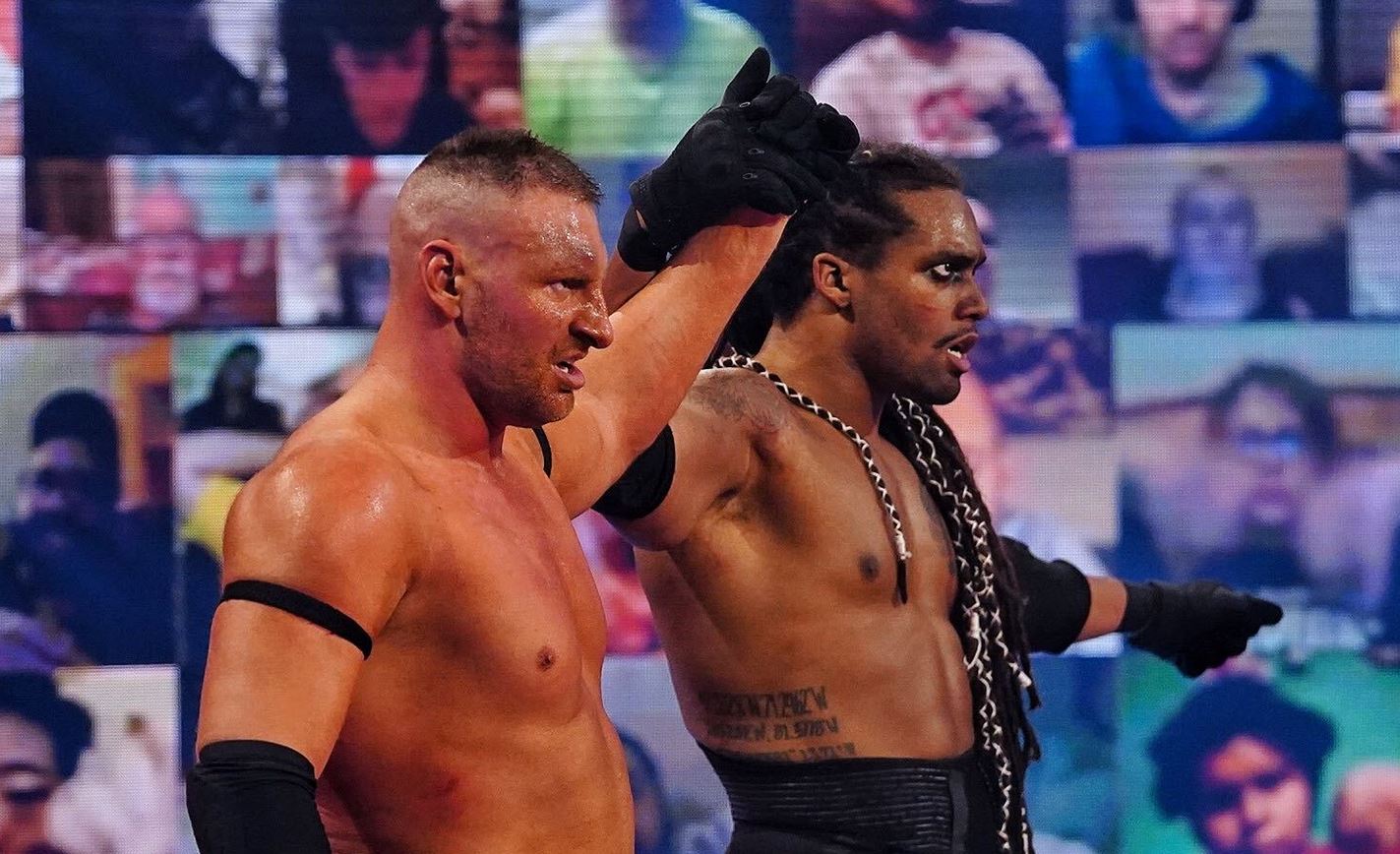 That’s how things should have unraveled for the faction…it just should have happened with a different trajectory.

My other choice here would be Riddle and Orton. 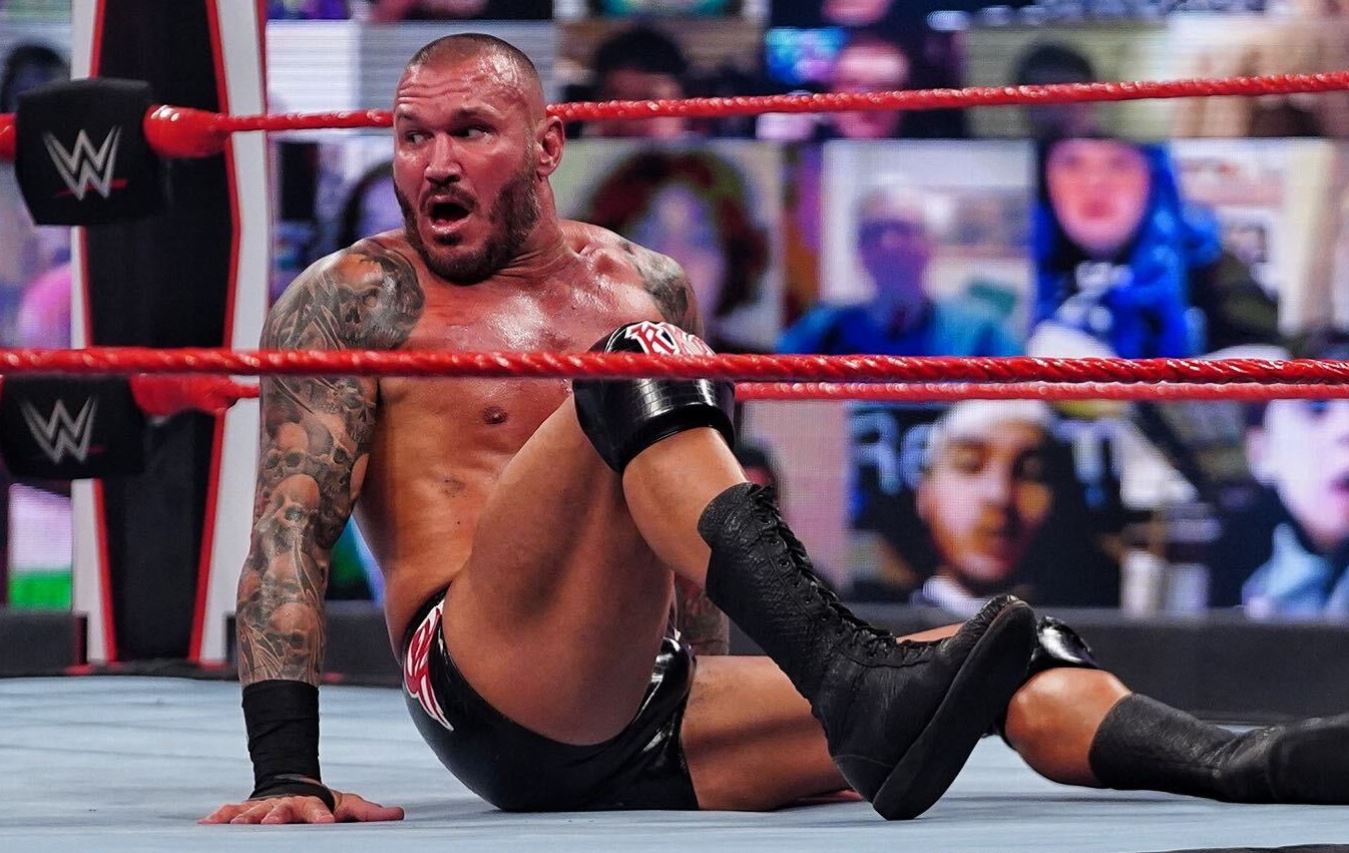 Riddle can be goofy to the point of, well, too goofy…but he’s a good performer and can work strong matches.

Sheamus versus Humberto Carillo…though it was not officially a match.

I mean, hey, we got to see Carillo…who seems to have lost all his steam since WWE left the format of taping RAW at the Performance Center.

I am actually going with Riddle here. Maybe it was more a flukey pin than not…but a win is a win, and one over Orton sends a message…I think. 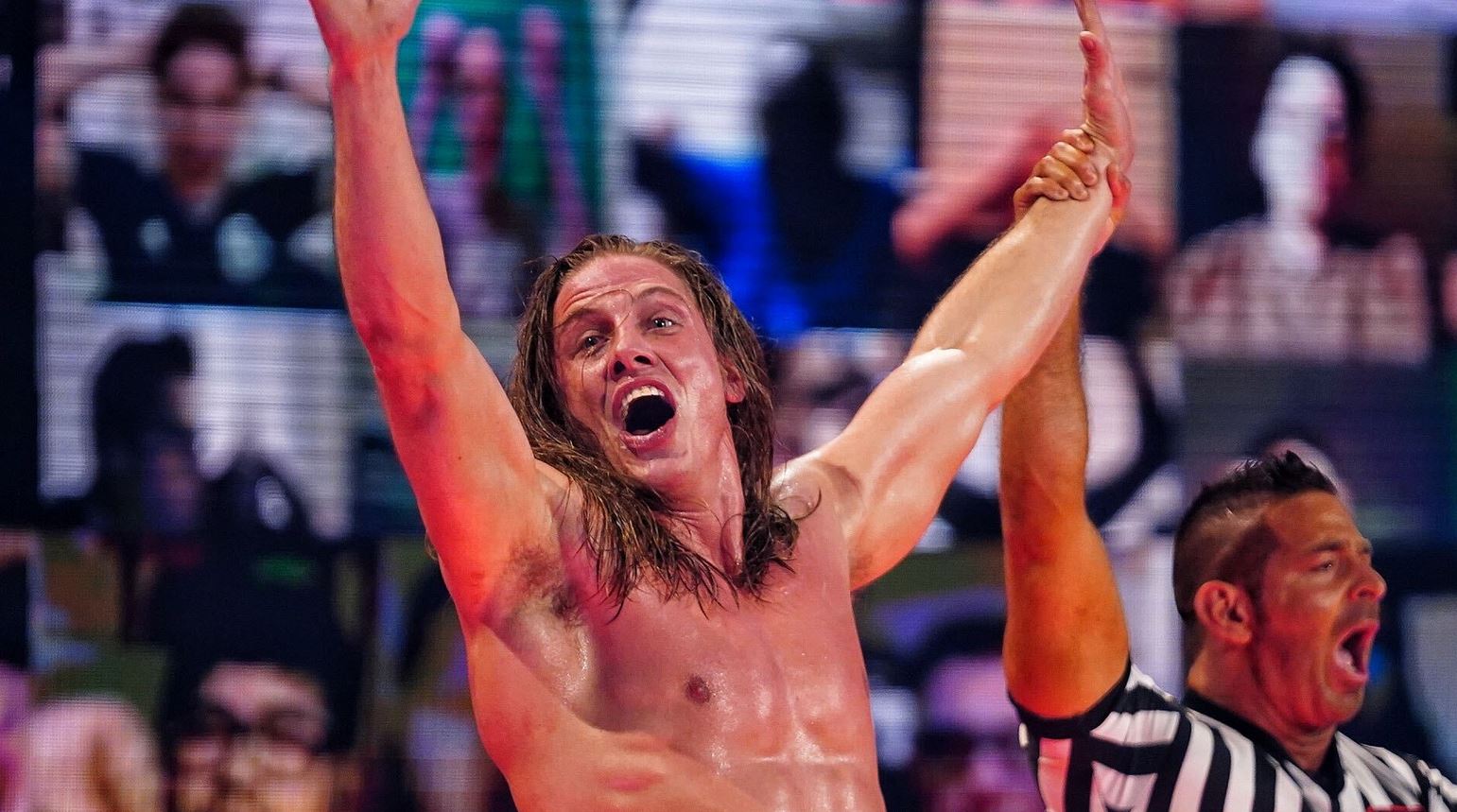 For me, I’ll take the masks as weapons as my spot. Sure, it’s a few spots…but that is my pick. 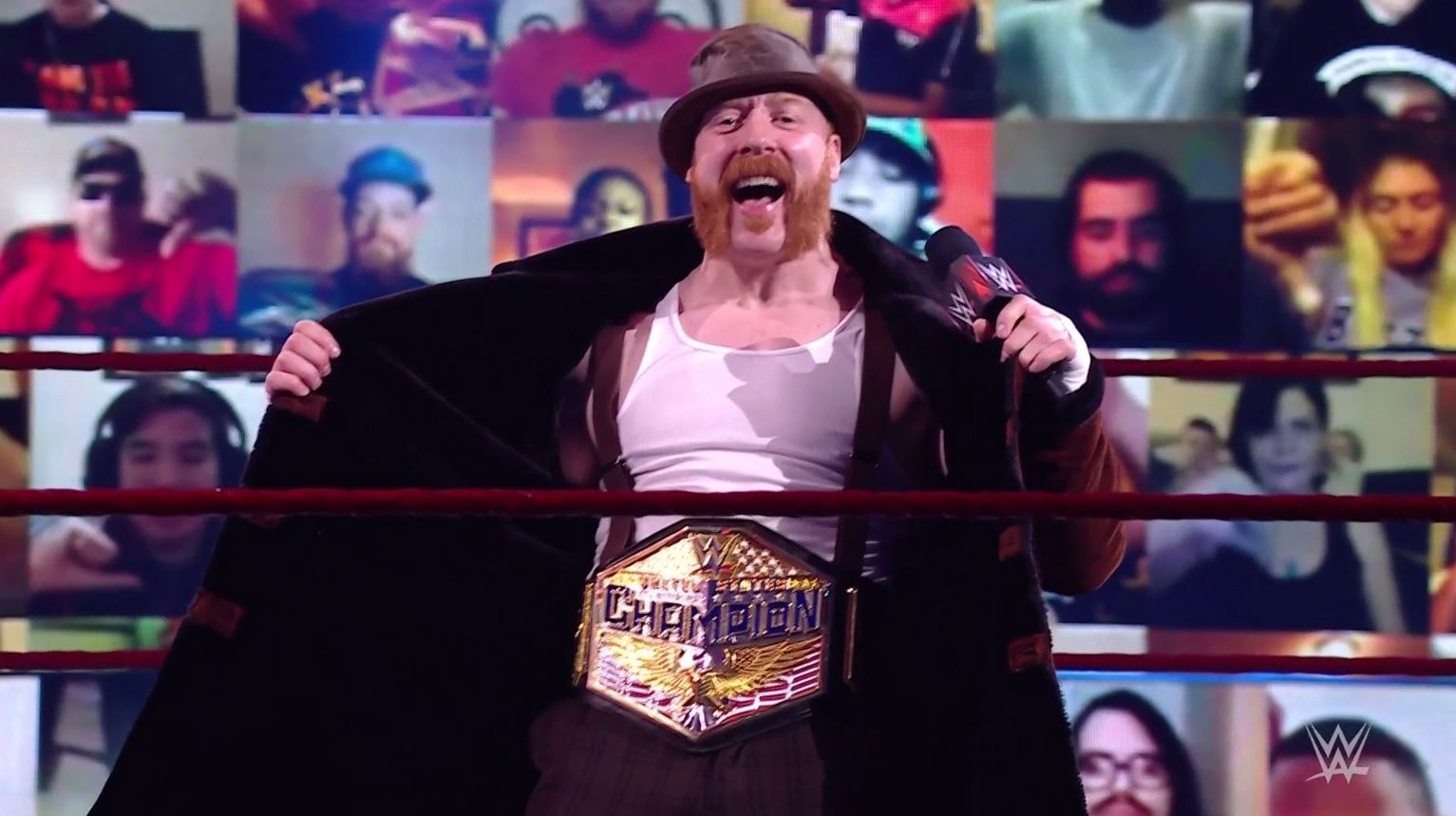 Humberto Carillo? I mean…Sheamus has to squash someone, so why not…

All get a part of the honor.

I will give this one to Matt Riddle for beating Randy Orton.

Is it a major one? Maybe not…but in terms of pecking order, Randy Orton is as established as you can get.

Well, I am sure WWE wanted those two unmasked for reasons that will maybe be made clear…

Also…not sure what to make of that snap by Charlotte Flair. I mean sure, she’s mad she lost…but that was straight savagery against an official…with interesting implications, for sure.

Could that cost Flair a shot at Ripley? Or will it further set that up?

It definitely cost her money…

Get the full details on @MsCharlotteWWE being suspended indefinitely and fined $100,000 following her actions at the conclusion of #WWERaw. https://t.co/8PtXEA7QGM

Could all that fun somehow lead to a three way match? 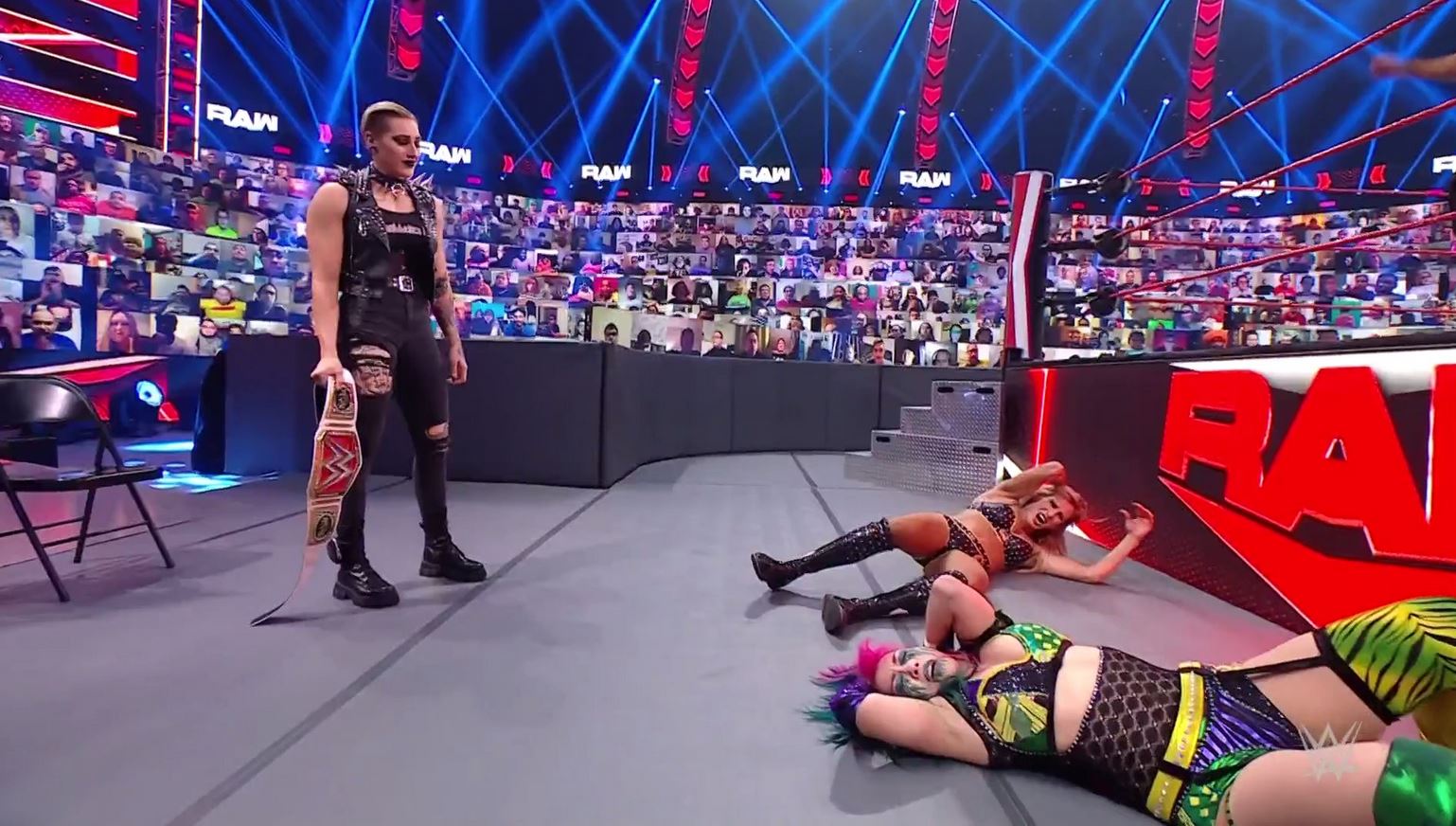 That tag match between Lana and Naomi against the tag champs was sloppy. Like, Lana went to chop down Nia at the knee…but Jax had already gone down to a knee?

And speaking of Lana…on one hand, I appreciate her commitment to be in unity with her team. She’s mirrored every tag team partner she’s had…

But…when will Lana have, and stick to, her own look?

Goofy as he can be…the interaction between Riddle and New Day was entertaining.

Well, Retribution was finally, formally unmasked. Sure, the ridiculous head gear has fallen off before, but those Superstars always grabbed it and hid their faces-even mid-match!

Not anymore…Drew McIntyre and Braun Strowman ripped off the masks and beat Mace and T-Bar with them.

How much longer must we continue not calling them by their previously known ring names?

OK, on one hand, the language felt ramped up to Attitude Era or Ruthless Aggression levels. Maybe not quite that bad, but a few edgier words.

That could be good, because those eras were entertaining…but…

This time around it felt less in the moment, and honestly just felt overdone or forced.

Also…I have mixed feelings on the direction for Alexa Bliss. The good is she’s back gunning for the women on the RAW roster, which should help spice things up.

The down? Really feels like she just stole the Fiend gimmick, and that just seems odd to me.

Not sure where it goes, but surely the babyfaces will win out. Meaning, it was an interesting development, having Strowman and McIntyre take on Mace and T-Bar.

Though, I am tempering my hopes here. With Drew going against Lashley in a month, I’d bet that we see this tag feud wrapped up, uneventfully, on a future RAW.

And I am already looking forward to that RAW In A Nutshell.

An interesting night. Retribution’s remnants have been unmasked…for one.

Charlotte Flair had an epic temper tantrum, for another.

Things are just barely coming into focus for WrestleMania Backlash…but in the meantime, our Scottish Psychopath is still seeking retribution.

Sure, Drew had some fun with Retribution on RAW…but the rest is yet to come. Not a bad RAW In A Nutshell to start off our week, eh?