It's another RAW In A Nutshell, and this time we are all recovering from WrestleMania weekend, the good, bad and everything else

Well, if you can read this, you made it through the weekend…which brings us to…RAW In A Nutshell: Recovering From WrestleMania Weekend.

Some of it was good, some of it was not. Regardless, it’s time to move on and start recovering from WrestleMania weekend.

Or, as WWE would likely prefer we say…start preparing for WrestleMania Backlash.

Yes, that is really the name of the next PPV, and yes, I think it’s a bit much.

But, with WrestleMania now in the books, it is time to move on to what’s next.

Like, what’s next for the announce team? That would be Adnan Virk, Corey Graves and Byron Saxton.

What’s next for Bobby Lashley? We don’t know, but I’d bet dollars to donuts we will find out sometime during this show.

So, no more delays, it’s time for…

Kind of by default almost, but the main event triple threat was a strong way to finish.

I’d say Mandy and Dana versus Shayna and Nia.

I will also say this…maybe now that NXT has women’s tag titles too, things can improve a bit…but right now, there’s just nothing good about the women’s tag team scene.

It’s just a couple of belts to put on women who WWE can’t or won’t give a run as RAW or SmackDown Women’s Champion.

Is that harsh? Perhaps.

An oversimplification? Most likely.

Well, I could say Drew for getting another shot. Fair enough.

I could also say Bobby Lashley, for having a dominant evening. Not going to complain about that.

However, I think MVP was the real winner here, as he is pushing all the right buttons and if he is truly morphing into a manager that Vince will keep…then good. 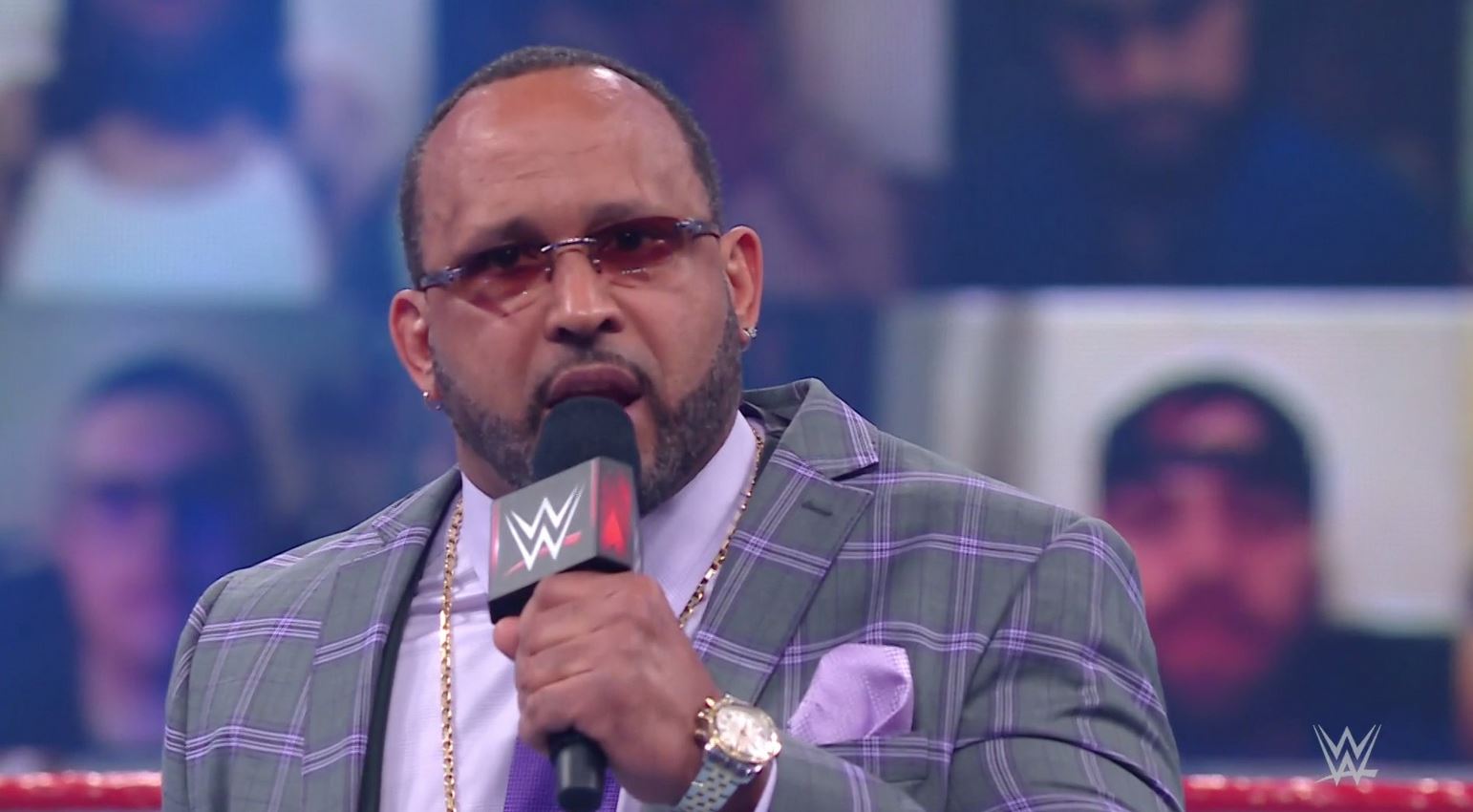 All the more reason WWE should build out The Hurt Business, not destroy it.

I will go with the show ending cliffhanger, with T-Bar and Mace giving that double chokeslam to the new #1 contender. 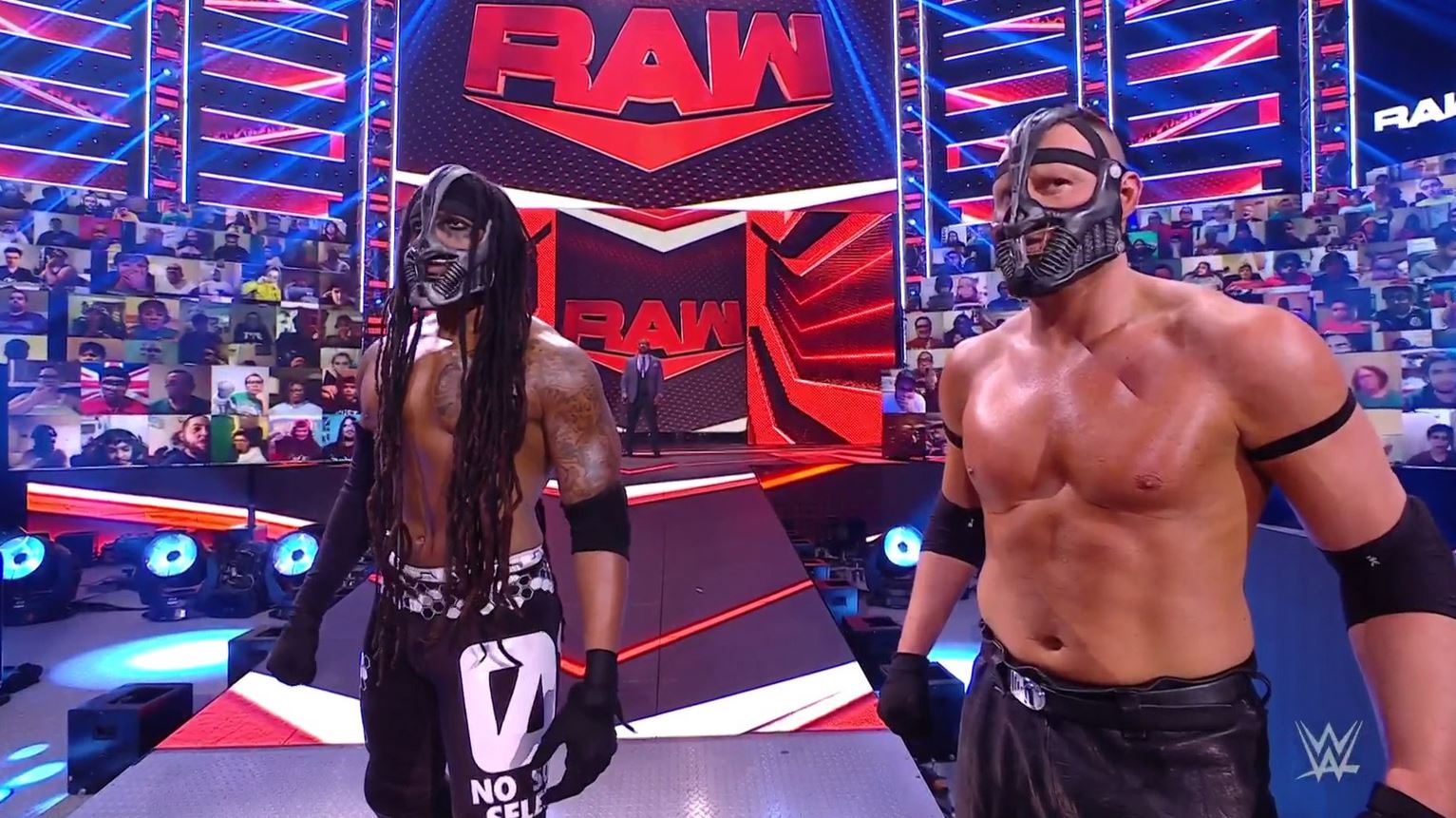 While he lasted longer than a typical jobber…that’s exactly what Riddle was tonight. 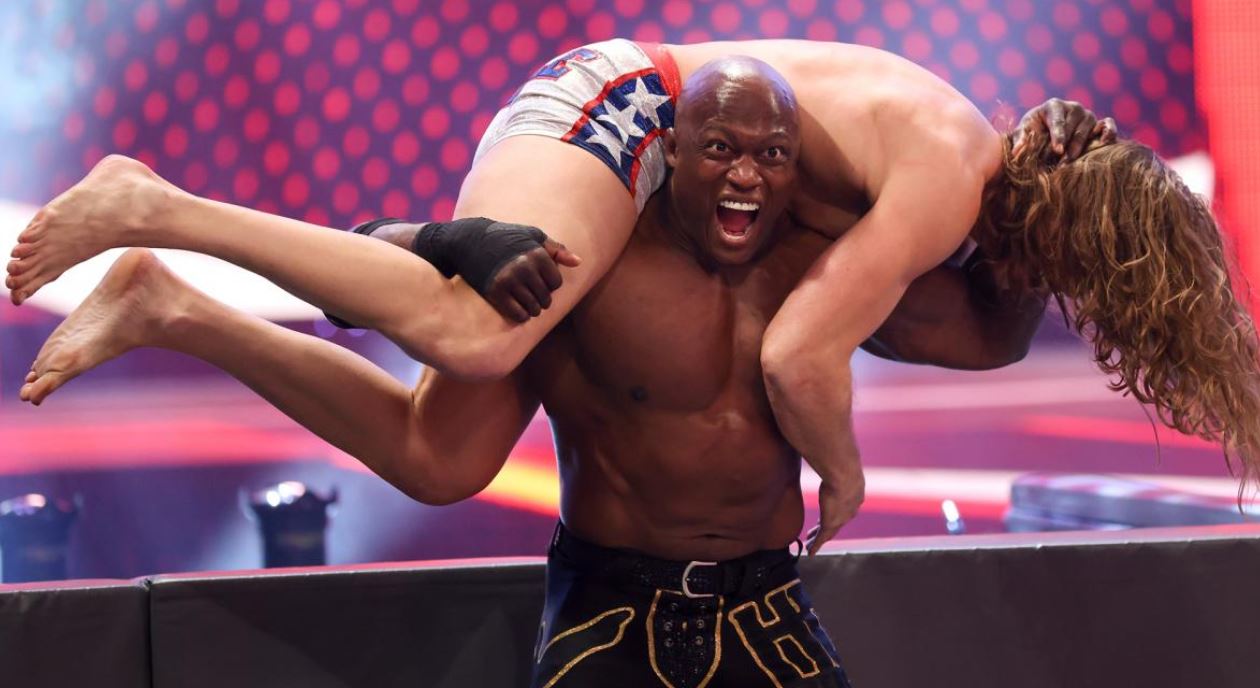 We end the show with Drew McIntyre getting ANOTHER shot at Bobby Lashley…and getting laid out by T-Bar and Mace as MVP looks on.

Normally, this one has been axed.

Tonight, I am not bringing it back for lines, but to critique the new broadcast team.

Graves is who he is, and sometimes the back and forth with Saxton can be funny…sometimes. 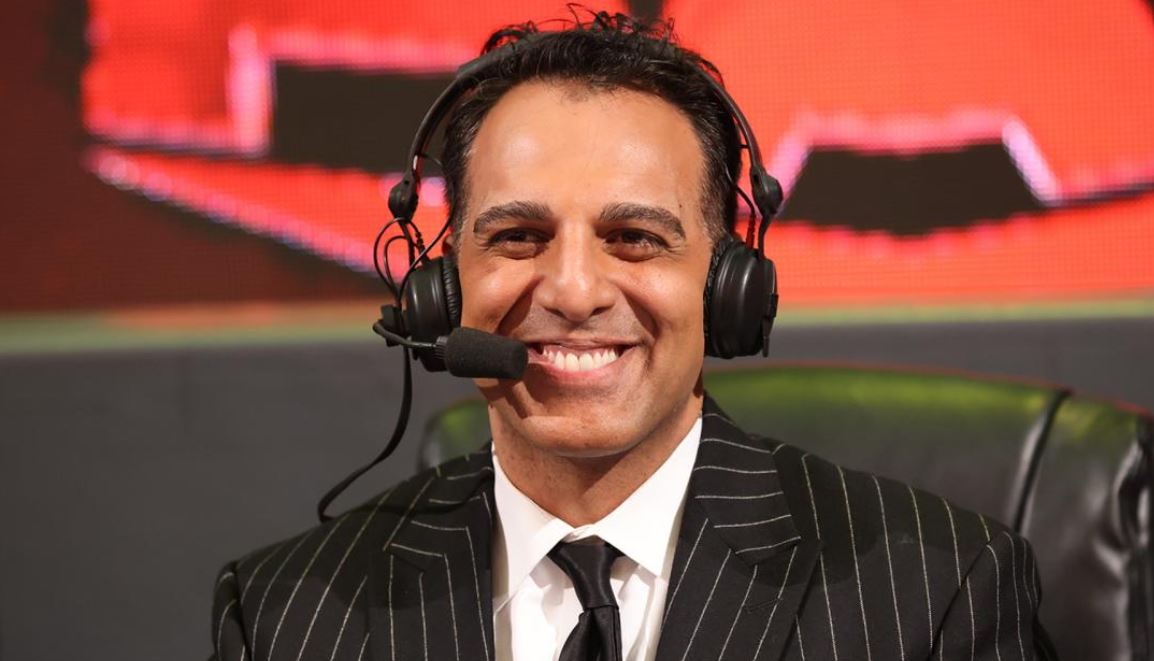 Adnan Virk is an unknown. I’d say through one night, he did not lose me…but it’s a work in progress.

Maybe I was just paying too much attention, but it felt like he was trying too hard? I mean, he welcomed us in and thanked his partners for carrying him on his first show…before it even started.

Sure, that could be humility and self-deprecation. But I need some time to see how he acquits himself.

I have heard Virk on ESPN and elsewhere, and he can be entertaining enough…I just never knew him to be a WWE fan, so there will be an adjustment.

Maybe it was what Vince wanted, but there were a few end of match calls where Adnan called it as if someone just hit a walk-off home run to win Game 7 of the World Series. That will get old if we hear it several times a week, every week.

Does not necessarily help that I (and others) were quite fond of Samoa Joe.

Elias, strumming his guitar, got us Lucille the trombone instead.

Speaking of self-deprecating, it was funny that Kofi and Xavier were very ironically teasing Elias and Jaxson Ryker for being destroyed by Braun…when both got dispatched by Omos.

Miz, Maryse and a lack of pants… 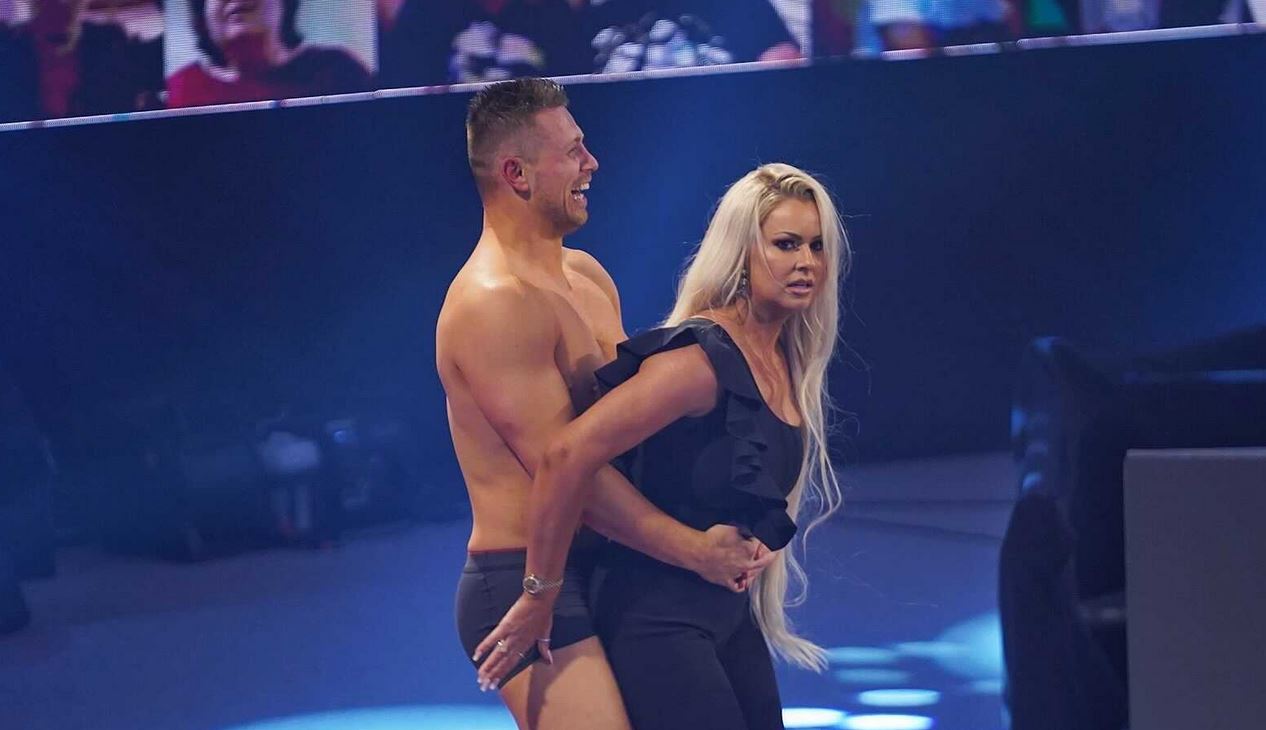 Then, there was WWE milking the Mandy stumble. Or, did Nia not trip on purpose….? 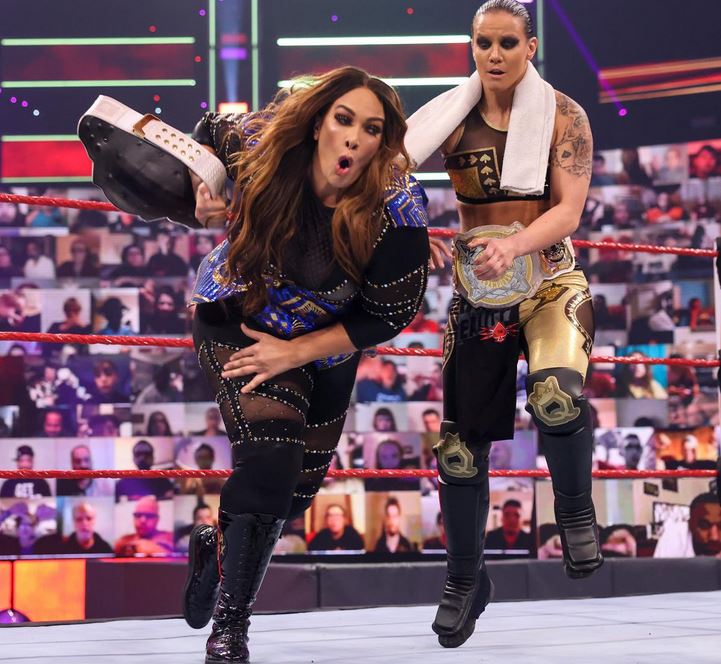 The Viking Raiders have returned. 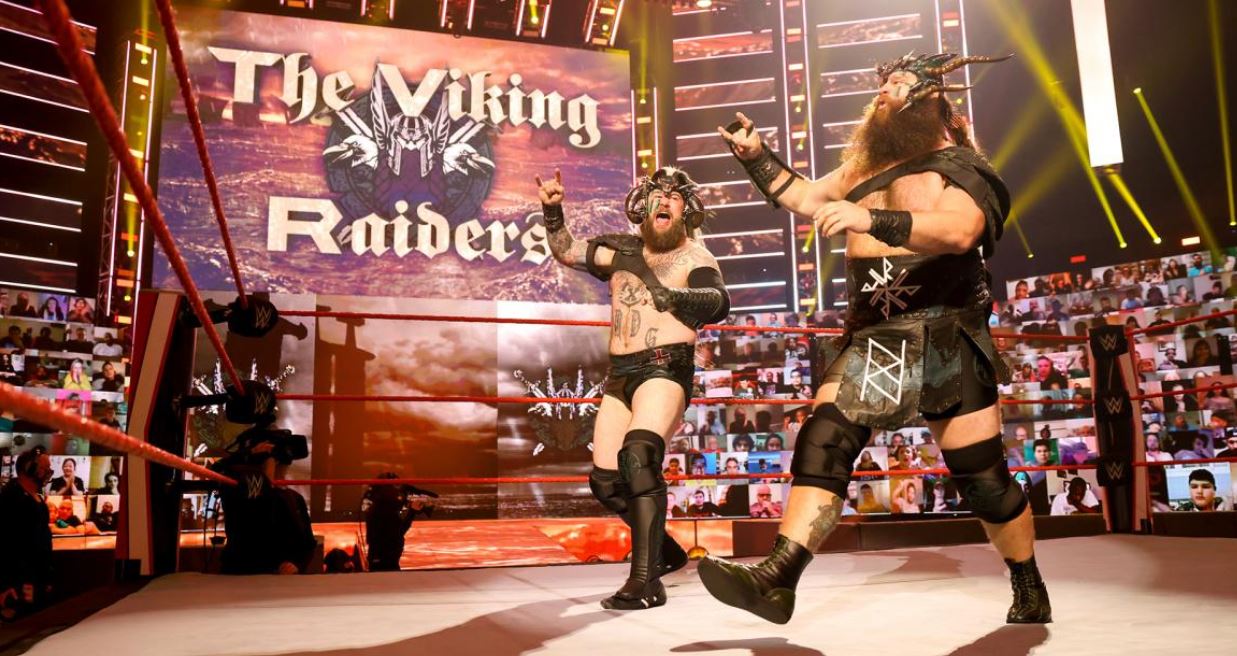 The return was spoiled, sort of, because you could see them both, in full ring gear, on the stage as part of the WrestleMania open on Saturday.

Still, it’s great to see them back. One highlight for this RAW in a Nutshell, for me at least. 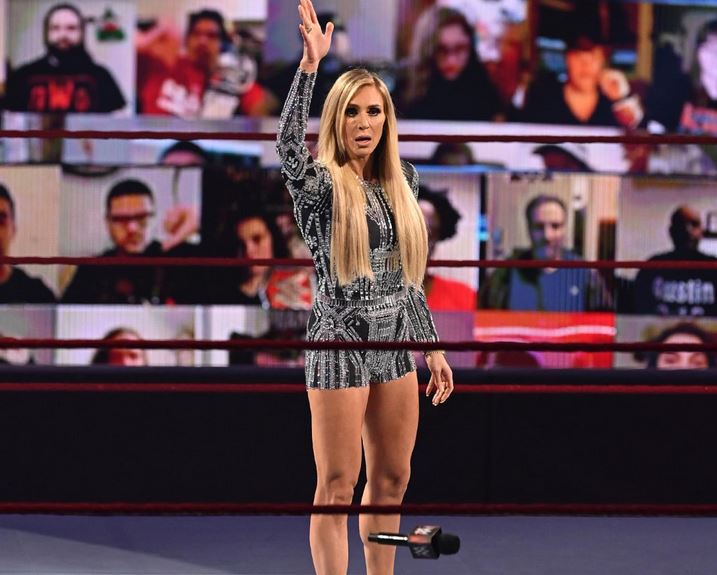 the devil is in the details pic.twitter.com/iQdhbTwgbO

And, Bray Wyatt along with the Firefly Fun House gang. Alexa has a new friend too, and there seems to be some weird story emerging there… 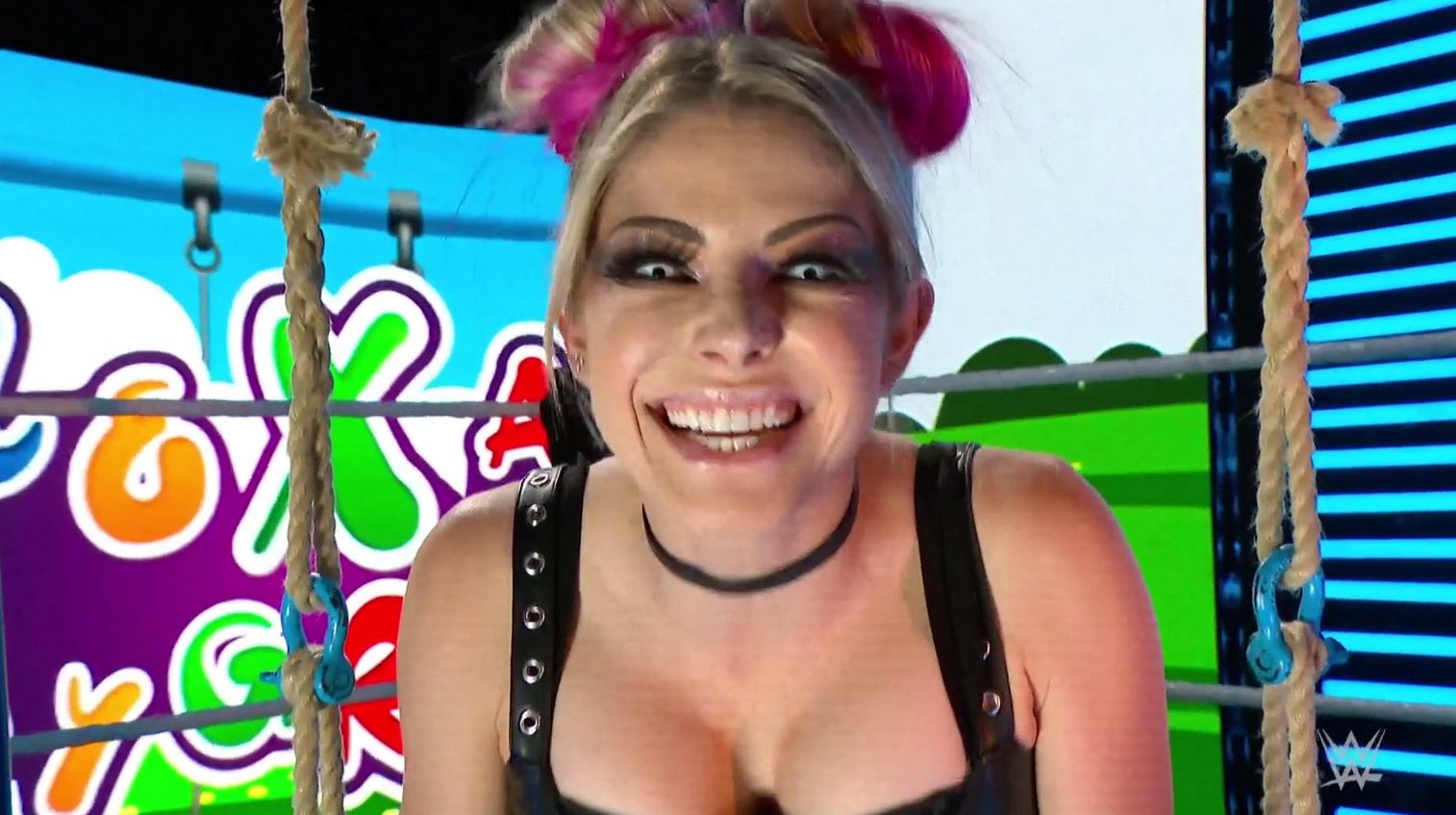 I hate the last few post-WrestleMania RAWs and SmackDowns, because we really don’t get the great NXT surprises anymore. I looked forward to those almost as much as any other big event of the year.

Another RAW and still no Keith Lee. I had plenty of thoughts about how to bring him back…

With The Hurt Business banned on  Saturday, MVP could have recruited Keith Lee to take out his buddy Drew.

Or, at the beginning of the show, with Lashley destroying Riddle…boom, here comes Lee. It would have been great, it would make sense, and immediately we could have had fresh blood vying for a shot at the champ.

Nope, instead we got a recent former champion, someone who some couldn’t care less about, and a veteran who is closing in on the record himself.

While I hate to see Riddle jobbed…making Lashley look like an unstoppable monster is the right move, so it does make sense.

Maybe the way both shows are set up, we see Keith Lee and…maybe Brock Lesnar? As the two alpha faces to take on the monster heels by the time SummerSlam hits.

Honestly, I don’t hate the sound of either. Which means it won’t happen.

Not a terrible way to recover from WrestleMania weekend…and I dig the revamped 3rd iteration of ThunderDome.

I don’t know if it goes a long way to recovering from WrestleMania weekend…but it does start moving things toward Backlash.

We’ve got another month until WrestleMania Backlash, so we shall see how things unfold. Another month’s worth of RAW In A Nutshell editions to get us there, too.