After recent comments on social media, Murphy has angered some at WWE. Plus, Carmella was not happy with a segment on RAW last night.

Murphy has been a WWE talent that hasn’t been showcased in storylines for quite a while now. In an attempt to shake things up, he recently posted a shoot message on Instagram, calling out the Mysterio family.

Plus, Carmella is not happy with the women’s segment on RAW.

Murphy was once at the center of things in a storyline that involved the Mysterio family. He and Aaylah Mysterio were romantically linked.

Her father Rey and brother Dominik weren’t overly pleased with their relationship.

The storyline was an interesting one. He went from a hated boyfriend to being respected by the Mysterio men and Aaylah’s. They all eventually came around, and Murphy was treated like one of the family. For a little while.

When Seth Rollins took a hiatus in December 2019, Murphy vanished from TV. While he recently re-emerged, it’s still unclear what his direction is, especially heading into WrestleMania 37.

Murphy would post a shoot message on Instagram, where he called out the Mysterio family. There were some harsh words tossed around. See below. 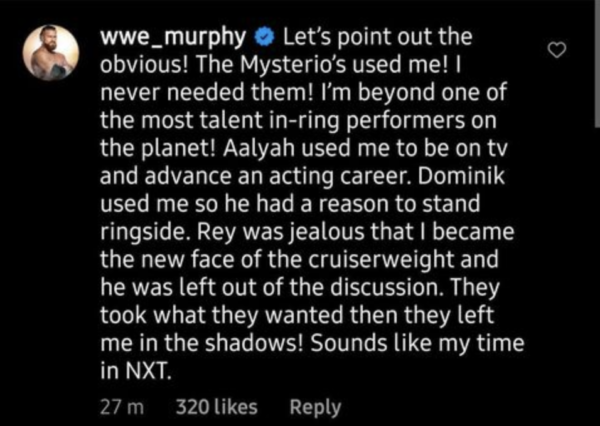 WWE Reached Out To Murphy

During a recent Wrestling Observer Radio, Dave Meltzer stated that the WWE reached out to Murphy, instructing him to remove the Instagram post.

Dave added that WWE officials weren’t pleased with the fact that he decided to “make up” a storyline for himself.

So, Murphy would end up deleting the IG post. It’s unclear what lays ahead for this WWE superstar, but WNZ will keep fans posted on any further developments.

Speaking of social media, it can be an excellent tool for WWE talent to create storylines, and build heat. It can also be a great platform for superstars to voice their opinions.

Carmella hopped on Twitter last night because she wasn’t too happy about the women’s segments profiled on RAW.

Skipping along the Road to WrestleMania, Monday Night RAW offered an interesting show this week. While the three-hour episode was jam-packed with content, there weren’t many women’s segments in the mix.

One person that was not happy about this was SmackDown superstar, Carmella.

Sure, Carmella works for Team Blue. However, this doesn’t mean she isn’t rooting for her female colleagues on RAW.

The Princess of Staten Island ended up hopping on Twitter and questioning the lack of women’s segments on the Red brand this week. See tweet below.

It’s interesting to note that there was no WWE Women’s Tag Team Championship match last night. No other storylines involving female talent were spotlighted. There was the Rhea Ripley and Asuka’s contract signing, but nothing more to add.

It’s clear that Carmella thought they could do better. She’s not wrong. There was a lull in women’s segments, and the last thing anyone wants is for the women’s division to fall to the waistline.

Carmella might not be on RAW. But, as a top female superstar, advocating for Team Red is a way for her to ensure women’s segments don’t dwindle on Team Blue’s show, too.