WWE Fired Jim Ross For Being Too Intoxicated, Lowball Offers Made

After almost eight years, Jim Ross opened up on being too intoxicated and fired by WWE. And, the company's latest offers to talent are low.

After having too much fun, WWE fired Jim Ross for being intoxicated at a publicity event and now the Hall of Famer gives his side. Also, WWE is done offering large salaries to keep talent that are not main event level.

WWE Fired Jim Ross For Being Too Intoxicated

Sometimes, boys will be boys. Typically, by traveling the road 300 plus days a year, the talent needs to relax.

After working long days of press coverage and wrestling shows, there are not too many options. But, there will always be alcohol readily available.

For some of the veterans, they can drink like a fish. They have seemingly done the impossible as alcohol makes them better at their jobs.

Then, there was 2013 incident involving Jim Ross and Ric Flair. It was SummerSlam weekend and Ross was hosting a panel of wrestlers on the new WWE 2K14 video game.

In short time, those in attendance were under the impression Ross and Flair were intoxicated. WWE was not happy, with Ross ultimately leaving over the incident.

During the Grilling JR Podcast, Ross went into further details and admitted he could see the chaos coming.

Ross On What Really Happened

“I had a couple of drinks but I wasn’t drunk,” said Ross. That was the story and that was a lie.”

“That was cover your a— s—. When I got to the shoot, I was the host, moderator, whatever and I went to the ‘green room.’” “The liquor was flowing like water. I thought, ‘Oh, this is gonna be interesting.’ A lot of the guys that did drink had drank too much Ric Flair and I, I guess, were considered two of those guys.”

Ric Flair so drunk/sauced he cost Jim Ross his job, live.
One of the greatest nights of my life. #WWE2K14

Also Ric Flair was still at the bar at 6AM when i woke up and went down stairs. Legend. pic.twitter.com/m8nPb8XUXo

Now, there are conflicting reports about what happened with Ross. Either he was fired, forced into retirement or decided to not renew his contract.

Afterwards, Ross spent a few years making a some appearances at Indy shows and for New Japan Pro Wrestling. Later on, he would return to WWE for two years and call a slew of special attraction matches.

Ross now calls AEW home, where he stated he plans to retire. Despite not knowing much of the new talent, Ross quickly improved and seems like his old-self on the headset.

As Flair, WWE did little and he has always been known for drinking stories. Currently, he still works for WWE and even appeared at the recent TLC pay per view in a backstage segment. 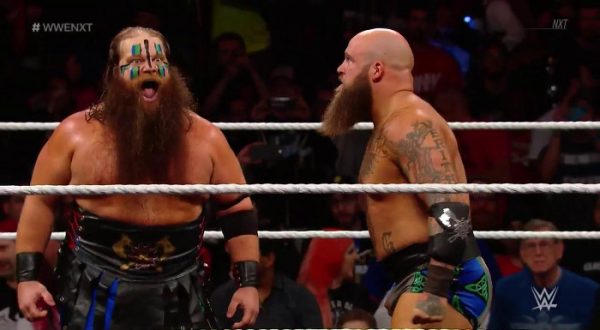 When AEW arrived, they forced WWE to change their priorities. Instead of letting low tier talent go, they would offer them great deals.

Now, the contracts being given are for much less money and fewer years. Meanwhile, it did not say anything about getting a renewed push.

2020 saw WWE and AEW battle another beast in COVID. Both promotions survived, but are feeling the effects.

So, according to Fightful Select, WWE has lowballed recent contracts. With no telling when WWE can return to normal and AEW in the same boat, there is less fear of losing talent.

Besides main roster wrestlers, NXT is feeling the same thing. Their contracts have also been cut drastically.

For now, this will be the model WWE follows until they can resume their regular schedule and agenda.