After Dynamite, the camera kept rolling and here's an emotional video from the Brodie Lee tribute show. And, has Erick Rowan signed with AEW?

AEW has uploaded an emotional video from after the Brodie Lee tribute show; featuring his family, some wrestlers and Tony Khan. Also, will AEW sign Erick Rowan to a contract after his surprise appearance.

2020 was one of the years the world looks to forget. There was COVID, racial injustice, a dangerous election, climate concerns and so much more.

He was only 41 years old and died the day after Christmas from a lung issue. But, it was not COVID related.

He left behind his wife, Amanda, and two children, Brodie Lee Jr. and Nolan.

At Wednesday’s AEW Dynamite, it was rewritten last minute by Tony Khan to honor Lee. Therefore, each segment featured something involving Lee and what he brought to the business.

The show concluded with Khan, Rhodes, 10, Amanda and Brodie Lee Jr. Khan presented Lee Jr. the TNT Championship and retired that edition in the process.

Even after the cameras stopped rolling, the emotional evening kept going. A crying Khan hugged Lee Jr. as “Thank you Brodie” chants broke out from the 1,000 plus fans in attendance.

Then, 10 grabbed the TNT Championship from Rhodes, who was on one knee, while Lee Jr. and his mom embraced.

The crowd then followed by chanting for Lee’s wife, Amanda. Nolan also got applauded and Khan said he’d see the clip later.

AEW’s final episode of 2020 was something we never hope to see. Lee is gone far too soon, but the stories people tell will last a lifetime. 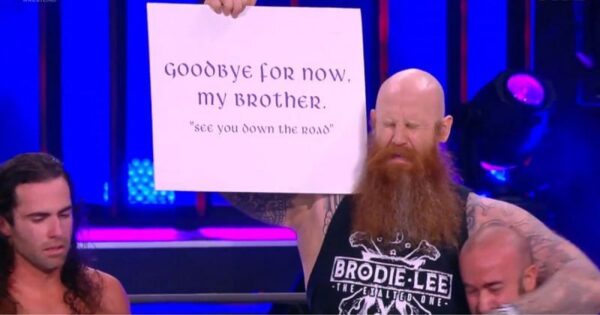 On the topic of AEW, they had a very surprising appearance for Wednesday’s tribute to Brodie Lee. They brought in Erick Redbeard (best known as Erick Rowan in WWE).

Rowan came out to runoff some people that were giving Dark Order a hard time. A visually upset Rowan held a sign that red, “Goodbye for now, my brother. See you down the road.”

The image of Rowan holding the sign with Page and other Dark Order members in his arms brought plenty of tears. Some even say the Dark Order inducted Rowan that night into the stable.

In a followup, the Wrestling Observer Newsletter notes how Rowan’s appearance was a one time deal. Considering everything Rowan and Lee have been through, it was another touching moment.

Of course, AEW could change their mind and bring Rowan in. Rowan was getting a push in WWE, but it suddenly ended and he was released as part of COVID cuts.

Rowan and Lee spent most of their time together in WWE. They were part of the Wyatt Family off-and-on for years and also went by the Bludgeon Brothers.

The duo captured tag team gold in NXT and the main roster. They had a similar look and in-ring style, making a great team.