With WrestleMania 37 months away, Vince McMahon has an idea for Ronda Rousey and her return match. And, the latest on Rey Mysterio's injury.

Ronda Rousey could be returning to WWE TV next year and Vince McMahon has idea for a match against Becky Lynch. Also, the latest on when Rey Mysterio can return inside the ring.

Currently, the WWE women’s division is undergoing a change. For the past few years, it was centered around Ronda Rousey, Charlotte Flair and Becky Lynch.

Now, all three female superstars are off TV for different reasons. What is even more interesting, is how those three made history by being the first females to main event WrestleMania.

Charlotte is taking time off to fix cosmetic surgery and apparently is mingling in Hollywood. Lynch is pregnant and due around December, while Rousey has been off TV since WrestleMania 35.

According to Wrestling News, Vince McMahon wants to get Lynch and Rousey back on TV in January or February. If WWE gets out of the ThunderDome, Vince’s vision is for them to battle at WrestleMania 37.

We noted yesterday how Vince wants WrestleMania 37 to be used as a platform to reintroduce fans to WWE. 2020 has been unpredictable and the hope is brining back fans in a large capacity will help the product.

Now, putting the match together by March 28, 2021, will not be easy. First off, Lynch will have only had her baby a few months before and the body needs time to heal.

As for Rousey, who also wants to start as family, her WWE future is a little unclear. The belief is her contract is almost up, but Paul Heyman hinted how WWE may have extended it.

What Happened 18 Months Ago

What helps, is the storyline is already there as they fought 18 months ago.

When Lynch pinned Rousey, there was lots of confusion as the former UFC champion got her shoulders up before the referee hit three. That was simply an error by the referee, but it could help jumpstart their feud.

Vince and Becky Lynch at Wrestlemania 35

The man and the boss goofing around pic.twitter.com/D2DrXYh7K5

WWE usually has a good idea of what their top matches for WrestleMania will be at this point. But, due to COVID-19, there are lots of uncertainties and WWE is taking things at a slow pace as things keep changing. 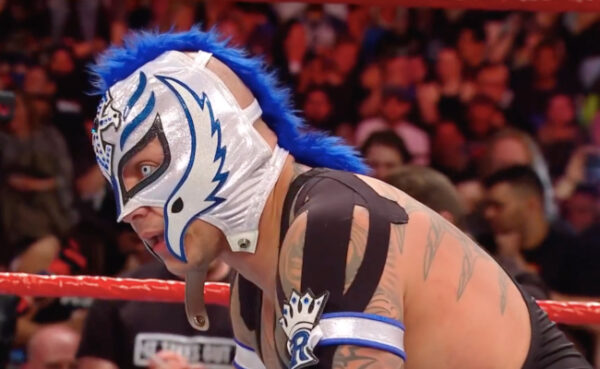 At August’s Payback, Rey Mysterio suffered a torn tricep. The timing was not great as he, along with his son Dominik, having been battling Seth Rollins for months.

During the WWE Draft, the Mysterio family and Rollins were sent to SmackDown. The feud does not seem over, but Daniel Bryan appears to be getting involved.

During Talking Smack, Mysterio provided a promising update on his return inside the ring.

“There’s no reason why I won’t be back to the ring soon,” said Mysterio. “I was a bit concerned in the beginning since the procedure [post surgery] was slow and it took time for me to recuperate.”

Mysterio knows his time inside the ring is dwindling. But, Dominik has impressed people in the handful of WWE matches he has taken part in.

Plus, Aalyah Mysterio is also now on TV as she works a possible romantic angle with Murphy. Vince McMahon is huge fan of Aalyah and may offer her a full time contract.