After speculation, Andrade might be returning to NXT. And, WWE has decided to continue a top storyline due to a positive response from fans.

A familiar name may be returning to NXT as Andrade is rumored to rejoin the yellow and black brand. Also, WWE decided to extend the angle with Roman Reigns and Jey Uso thanks to the fans.

The WWE Draft came and went, with a few names not being mentioned. In particular, Mickie James and Andrade were not assigned a brand.

Then, WWE said anyone not drafted will be part of RAW. Although, there is some belief Andrade could return to NXT.

He posted a picture on social media from when he captured the NXT Championship with Zelina Vega’s help. According to PWInsider, there was discussion last week of Andrade going back to NXT for an unknown amount of time.

Right now, Andrade has no direction on the main roster. He is no longer teaming with Angel Garza and Vega has been sent to SmackDown.

After being attacked by The Fiend Bray Wyatt on RAW, that could have been a way to write him off the main roster. NXT just regained former champions in Ember Moon and Toni Storm, so there could be another addition coming soon. 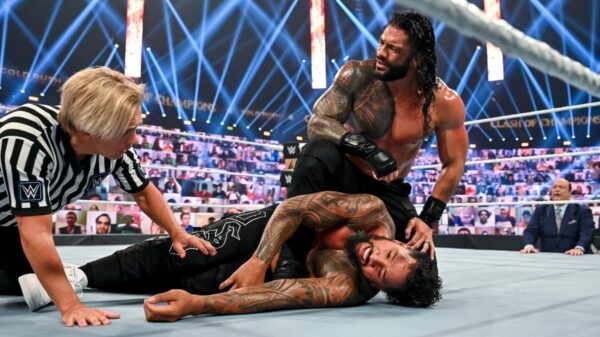 When Roman Reigns turned heel, WWE completely changed some angles. First, WWE needed to find a worthy opponent to get Reigns over as the company’s top heel.

Since Jimmy Uso is injured, WWE decided to give his twin brother Jey Uso a massive push. With one win, Jey was booked against his cousin and Universal Champion Reigns.

They fought at Clash of Champions, with Reigns dominating. So much, that Jimmy hobbled to the ring and eventually threw in the towel.

Apparently, the angle was supposed to stop there, but WWE saw the response from the crowd and the feud continues. While speaking with Peter Rosenberg, Jey went into further details.

“I think I was just to get Roman to the next homie but man, you see the storytelling, this is real. The feeling’s right there, the promos right there.”

“If you watch the match back, the match was basic, what grooved is the damn story and that is the main thing. We showing you real emotion, we showing you feeling.”

The two will run it back later this month inside Hell in a Cell. WWE even added a twist, throwing in an I Quit stipulation.

So far, the feud has shown Jey can hang with the best, while Reigns continues to cement his heel status.