WWE lured Roman Reigns back to TV by using one special request. And, there is a special shirt honoring the late Road Warrior Animal.

Less than a week later, SmackDown closed with Reigns revealing Paul Heyman as the Special Counsel to the Tribal Chief. In the process, Reigns turned heel.

Did @WWERomanReigns become a “Paul Heyman Guy” on #SmackDown?!?! @HeymanHustle

So far Roman Reigns is a heel by virtue of his association with Paul Heyman, not so much by his actions.#SmackDown pic.twitter.com/Cgp8eX567U

At the time, fans had not seen Reigns since late March. Due to COVID-19, he pulled out of his WrestleMania 36 title match about 10 days out.

While speaking to Corey Graves on After The Bell, Reigns reveled that WWE likely used Heyman to lure him back. 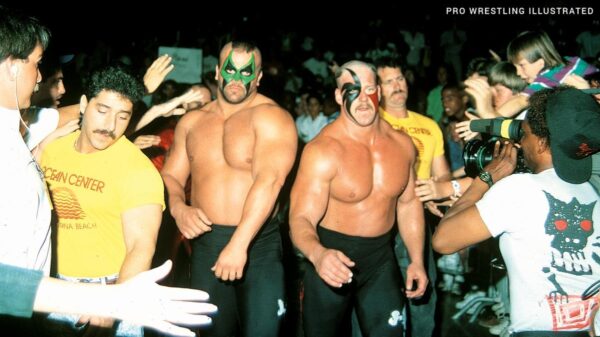 Only days ago, the wrestling world lost Road Warrior Animal (real name Joseph Michael Laurinaitis). He was 60 years old and the death is currently listed as natural causes.

With his passing, so ends any hybrid version of the Road Warriors. For many, they considered Animal and Hawk one of the greatest tag teams in pro wrestling.

We’ve worked directly with @roadwarrioranimal ‘s wife and designed this commemorative shirt. 100% of the proceeds will go directly to Animal’s family. Thank you for all the memories, Joe. Go to https://t.co/PHAAUK4vag pic.twitter.com/QEZlKQP4Po