Rey Mysterio and Vince McMahon have made progress in signing a new WWE deal. And, Jim Ross is unhappy with certain AEW stars.

Rey Mysterio and Vince McMahon are talking about him re-signing with WWE. Also, Jim Ross is not afraid to speak his anger towards some AEW stars.

After years away, WWE re-signed Rey Mysterio. That contract expired and the two were working with any official paperwork.

Instead, Vince McMahon continued to pay Mysterio the same amount from the previous deal. Now that Extreme Rules is over, fans are speculating what is next for Mysterio.

The Wrestling Observer Newsletter mentioned how both sides are close to a new contract. McMahon and Mysterio are expected to to meet shortly to finalize matters.

A big issue involved money. The future Hall of Famer wanted more money, but McMahon was not interested.

If everything goes as planned, Mysterio will return to TV and continue his feud with Seth Rollins. At last week’s Extreme Rules, Rollins won by removing Mysterio’s eye.

WWE’s medical follow-up stated that Mysterio will not lose his eye. As for a return, that was never mentioned.

A key point in Mysterio sticking around involves his son Dominik. He has been training to be a pro wrestler and Mysterio is trying to make a smooth transition into WWE.

While Dominik has been featured in some recent Mysterio angles, he had a much larger role in the Rollins program. There is a strong possibility Dominik continues to help his father against Rollins.

Also, there has been talk that Dominik could turn on his father down the road. Then, he would join Rollins’ stable. 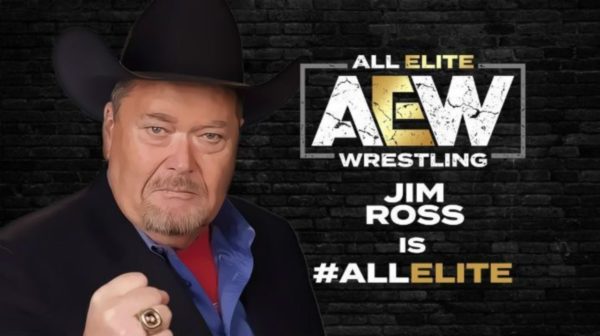 Jim Ross has been with All Elite Wrestling (AEW) from the beginning and he brought a plethora of knowledge. After taking time to adjust to a new company, Ross is back to his old self at the announce table.

While Ross is happy with AEW, he does have problems with certain stars. He noted on Grilling JR that some talent simply do not listen to basic rules.

“The issue is, not everybody listens,” said Ross. “They think that some things ‘suck’. We don’t have tag ropes anymore because some of our crew think it’s lame. I think it’s bulls—. Heels need rules to break.”

“The heels when they get out and wrestle? They cheat. It’s never changed, it’s not going to change.”

“Most of them listen in and are appreciative. I can tell when their eyes go off the topic.”

“If I’m talking to you and you ain’t looking at me in the eye? You ain’t listening. So why should I waste my breath?”

I LOVE this announce team. Jim Ross is THE voice of prowrestling, true legend. Excalibur is enthusiastic and knowledgeable on wrestling his energy draws you in. Tony Schiavone is extremely versatile when it comes to commentary, interviews, onscreen segments. Total package #AEW pic.twitter.com/dgyRTxJv1A

Ross is not the first person to comment about AEW. Chris Jericho, who is highly respected by the locker room, held a meeting to address problems with the product. Like Ross, Jericho has similar complaints.

Basically, referees are completely ignoring the tag rules and allowing outside interference in matches is not new. But, more fans are starting to call out officials and talent for intentionally breaking the rules.