In a Zoom video meeting with Jeff Dunham's puppets, a troll "zoom bombs" the gang and things immiedately go downhill for Walter.

Jeff Dunham just took Zoom video meetings to a whole new level when America’s favorite ventriloquist brought out Walter and the rest of his most popular puppets on Zoom to discuss a very serious modern day problem – an online troll.

As you can expect from Dunham, the results are hilarious especially when they were video bombed or as we like to say “Zoom bombed” by an online troll. 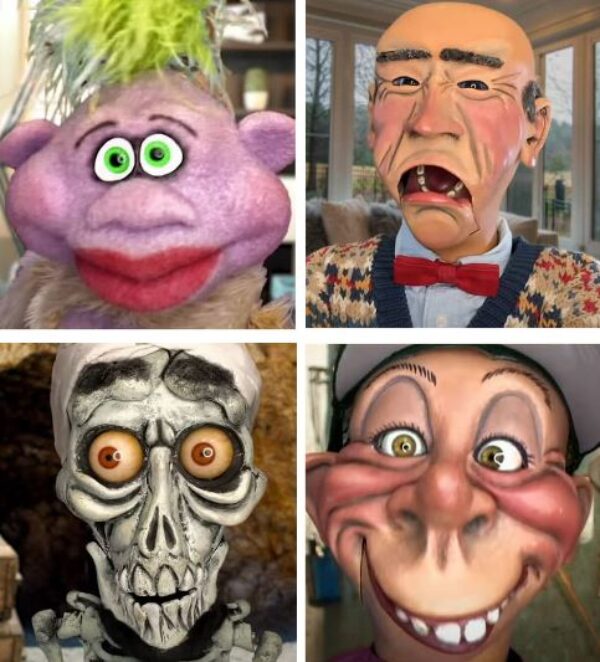 During the coronavirus pandemic, many of us have turned to Zoom to hold work meetings or visit with family so many of us can relate. We have gotten used to having meetings where everyone is formatted in squares as they were in the Brady Bunch Bunch opening credits.

Watching Dunham’s puppets face the challenges of online meetings is quite funny, especially with the technical difficulties Bubba J experiences.

Nobody likes to be trolled and Peanut, Walter, Achmed the Dead Terrorist, and Bubba J decided they needed to do something about the harassment they receive online. But, this quartet ends up trolling each other and laughing at the comments that were made about them online.

They quickly realize there is a lot of truth about what is being written about them online.

Everyone laughed when the comments were read aloud. Everyone except Walter!

“Walter looks like his expiration date was 2005,” the troll wrote. The other three laughed at the comment while Walter sported his permanent scowl in disagreement.

RELATED: WATCH: Walter Tells Jeff Dunham Why Marriage Is Like A Slurpee!

The grumpy old man did not appreciate it one bit. He doesn’t care for the modern-day bullying isn’t right. Walter favors the bullies of his younger years.

“When I was young, we used to bully people and get our asses kicked like men,” Walter grumbled.

Walter Gets Zoom Bombed By A Very Familiar Face

Everyone except the old curmudgeon was enjoying himself when a fifth participant entered the Zoom meeting. Zoom bombing is becoming a problem for online meetings and now these four were experiencing it first hand.

At first the zoom bomber is slightly hidden. They didn’t know who it was but they knew that it was most definitely their troll!

Suddenly, the lights turn on and the identity of their troll was shown.

This was a brutal revelation for Walter who knows his troll well.

Walter was shocked, disappointed, and mildly humiliated in front of his friends. Watch the video below to get a peek at how they handled this very prevalent modern-day problem.

Walter has a basement-dwelling grandson! Maybe moving in with the old man would help him grow up as he needs a good dose of reality.

RELATED: Achmed Gets 10,000 Fans To Commit A Felony In This Hilarious Jeff Dunham Clip