RAW In A Nutshell: Heading Home To Backlash

We are heading home to Backlash this week, as we get read for all remaining PPV hype. Let's crack open this RAW in a Nutshell.

This is it folks! It’s our final RAW In A Nutshell before the PPV, which means we are heading home to Backlash!

Former NXT Women’s Champion Charlotte Flair will be on the show, reviving her past rivalry with current RAW Champion Asuka. The Empress of Tomorrow has Nia Jax this Sunday.

The big attractions, if you choose to listen to WWE, is Edge versus Randy Orton. To finish hyping that one, we get the return of the Peep Show!

There’s also the title match pitting Bobby Lashley against the champion, Drew McIntyre. That one promises to be a brawl.

RAW In A Nutshell: Heading Home To Backlash

I am kind of ambivalent on this tonight, because for the most part, the matches were good. That said, I don’t feel a match did so much to distance itself.

If I was pressed to do it, I’d choose the main event. There was decent action up and down, but Asuka and Charlotte were very good.

I can’t pick one to complain about. I’ll say that none were abysmal, so that is a plus.

Asuka and Charlotte were strong. Orton and Edge were too.

This one was a good one, for sure…

Probably not really the usual holy sh** fare, but damn it was good to have the Peep Show back.

I, and many others, may rightly trash the “greatest wrestling match ever” tag…but Orton and Edge are certainly doing what they have to do to build the match up.

Not so much a botch, as it is a victim of the long tapings. Still, this eagle-eyed fan spotted this, so it qualifies.

I like that during the first commercial break the tag titles went from having Alexa and Nikki side plates to having Bayley and Sasha. #RAW #WWERaw 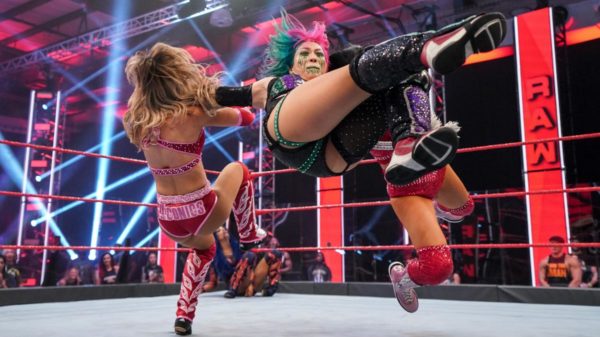 Shad still getting the love from the WWE Superstars. Nice to see…

This is something to ponder, too. While these two work well together, at some point you have to let Asuka get a win, no?

Still hate them hyping “the greatest wrestling match ever”.

Unless they have the best editing ever, it’s unrealistic to achieve it. Pretty much everyone knows that.

The non-wrestling stuff with the Profits and Raiders is tiring. I guess this week was a little better than most…but that is not saying much.

Opening segment was good. Maybe overlooked by some, but this post sums it up well:

Charlotte is the best female talker. Sasha & Bayley can work and are over, “Crazy Asuka” is the best Asuka, and Iconics are a good act. The opening segment has superior talent than AEW and Impact combined. #RAW @WWE

I’d have to say this was a good show-not great, good. Have to like the amount of screen time the women got.

Not because I am woke. Actually, because they worked their butts off and have some compelling stories, between Asuka, Charlotte, the tag teams and more.

I think the vast majority of the final hype we got this time out was good. Lashley and McIntyre. The triple threat women’s tag match, Nia Jax and Asuka.

Backlash is Sunday, and I can see how the show could be a good one.

If that isn’t enough, it seems that Rey and Dominick are slated to be on RAW next week. Guessing we might see some physicality out of Dom…