Paige made her feelings regarding the WWE women's tag team titles known, and Dustin Rhodes is branching out, opening his own school.

The current WWE women’s tag team titles belong to Bayley and Sasha Banks, but Paige is far from impressed with how the division has progressed.

During WWE Backstage, Paige, Beth Phoenix and Ember Moon discussed the championship match, and Paige did not hold back on her thoughts. Moreover, she shared more than WWE might have liked.

“I feel like the tag team championships haven’t been utilized to their full potential, considering everyone that’s had them,” Paige said. “I feel like they’re not being defended; they’ve kind of been thrown under the rug.

“They’re not being taken very seriously and I just feel like at some point they have to be taken seriously because this is such a big moment for the women’s division to have these tag team titles — instead of just having one championship.”

Bayley and Banks bested Nikki Cross and Alexa Bliss on a recent episode of WWE SmackDown.

“Now we have a tag team division and we could utilize so many of the tag teams we have, even down in NXT or up in RAW and SmackDown,” she continued. “Bayley and Sasha — they’re good, they’re solid, we all love them, but let’s try and build some other people.”

Moon offered her support with what Paige was saying, and both felt the WWE could have moved in a different direction than putting the titles on established wrestlers like Bayley and Banks. However, WWE seems pretty set in their ways.

“I don’t think think the @WWE Women’s Tag Team Championship has been used to their full potential.” – @RealPaigeWWE #WWEBackstage pic.twitter.com/jfwoioXAOj 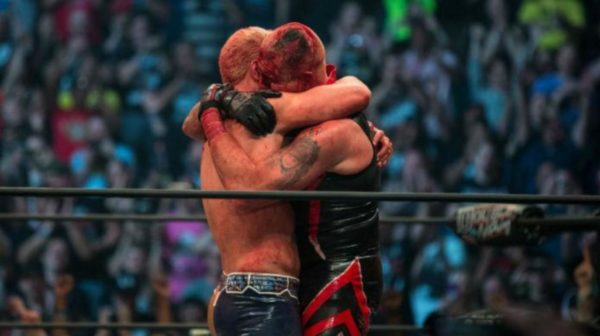 Pro wrestling is in Dustin Rhodes’ blood, sweat and tears, having spent the majority of his life in the sport. Therefore, he knew passing on his knowledge to other was necessary.

That will continue for the foreseeable future, as Rhodes is planning to open his own pro wrestling school.

“My wrestling school is in it’s planning stages,” Rhodes posted on social media. “Always dreamed of having one. Gonna make that a reality. Can’t wait.”

My Wrestling school is in it’s planning stages. Always dreamed of having one. Gonna make that a reality. Can’t wait. #RhodesWrestling
Stay tuned pic.twitter.com/jgZxrFR6u3

It is very possible that the school turns into a breeding ground for All Elite Wrestling, which is operated by Dustin Rhodes’ brother, Cody, and others. Meanwhile, Dustin still competes on AEW TV.

Currently, AEW has no official wrestling school, using QT Marshall’s in Norcross, Georgia to help wrestlers learn the ropes. It was also the home for several episodes of AEW Dynamite and AEW Dark during the coronavirus pandemic.

Plus, Allie has made some special gifts for us. Can’t wait for everyone to see.

He made his pro wrestling debut in 1988 and has held titles such as the WWF Intercontinental and tag team belts along with the WCW United States and tag titles. Also, The 51-year-old Rhodes was trained by his father, Dusty Rhodes, and Steve Keirn.