There are reports of WWE staff not wearing masks; which would defeat social distance. Also, Dustin Rhodes deleted a controversial COVOD-19 post.

WWE is now essential business in Florida, meaning they can run shows. Currently, two weeks of the month will be live, with the rest taped.

Part of allowing to keep producing content is that they follow specific rules. This includes wearing a face mask, social distance, only so many people allowed in the building and going medical checks.

Apparently most of the WWE employees are not practicing these guides. Fightful Select mentioned how talent and staff are both to blame.

The report stated that almost none of the talent have been wearing masks. As for staff, about 80% are following the rule.

The WWE is an irresponsible organization that should NOT have restarted their weekly matches. You can’t social distance when you are wrestling someone. The WWE is NOT an essential business!

While the might be uncomfortable, they are a necessity at this time. Many states have orders in place where you cannot enter stores with a mask and/or gloves.

Supposedly, WWE is keeping their Performance Center clean. After every match, everything is taken down and cleaned.

Talent that feel sick are told to attend the the TV shows. And, if someone presents a fever or symptoms of being sick, they are not allowed to enter the building.

WWE producing shows again with many people in place has drawn criticism. There is a belief that WWE is not helping solve the COVID-19 pandemic. 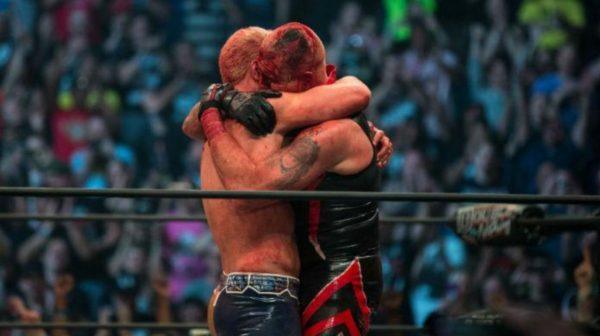 There are almost three millions cases of COVID-19 across the world with 204,000 deaths. Unfortunately, those numbers are only going to keep increasing.

While numbers will go up, it appears that some parts of the world have seen a peak. Social distancing is being praised for helping to keep the numbers low.

At the same time, people are starting to getting antsy. Many businesses remain closed and a record number of people have filed unemployment.

This led to several protest around the country. Basically, people are tired of the government telling them to stay home.

All Elite Wrestling’s (AEW) Dustin Rhodes understands the importance of social distance. But, he wants the county to open.

He called the shutdown an act of socialism. On top, he said the economy will be destroyed unless the United States reopens.

“The world needs to open back up and end this mass hysteria,” said Rhodes. “We are not a socialist nation. We are not a democracy! The people n are a republic. If we go on any longer with this bulls—, our economy will be shot and that much harder to kick start. #EndTheShutdown”

“I mean, no doubt we have an epidemic on our hands,” continued Rhodes. “And, have sustained losses which is sad, but we have to move on with our lives. Take precautions is fine, but end the shutdown please. I CARE ABOUT HUMAN LIFE, GUYS. Jeeze, take precautions, don’t go out if you have a comprised immune system. Wear your masks and social distance. Still open up.”

In conclusion, this is a tough time for the world and we need to act together to conquer CVOID-19.