The Colons made a pitch to bring back Carlito, but there was one major issue that prevented it. Also, Ronda Rousey's WWE debut upset a top star.

Pitch To Bring Back Carlito

Despite rarely getting booked and being repacked several times, The Colons had a good relationship with WWE. Therefore, Epico & Primo Colon were able to pass along some ideas to Vince McMahon.

Epic & Primo discussed with McMahon and also Michael Hayes about bringing Carlito back. The initial reaction from WWE’s higher ups was positive.

Then, three months passed with little progress. Eventually Carlito was made an offer.

Apparently, WWE wanted to give him a developmental wrestler contract and that was not flying. Carlito decided that WWE needed him and not the other way around.

Epico Provides Details On The Conversation

“One day we we are talking with our Director of Talent Relations [Mark Carrano],” said Epico on SUPER LUCHAS. “We asked him about Carly, but he told us that Vince has not given the ‘OK.'”

“So, we told him, ‘Let’s go talk to Vince! He’s there!’ [Carrano] was afraid of that, but we said to him, ‘Yes! We have confidence in Vince.’ So, we grabbed him by the arm and we go to Vince’s office.”

“He’s on the phone and we asked him about Carlito and our director asks, “What are we doing with Carlito?” And Vince made the thumbs-up signal. Vince approved the idea. But, after several weeks, we realized that Carlito’s return to the company was no longer going to materialize.”

Primo and Epico were part of 40% of talent let go due to COVID-19. As for Carlito, he remains busy competing around the globe.

Do not be surprised to see all three appear for World Wrestling Council. Carlos Colon, the head of the family, is one of the promotion’s founders. 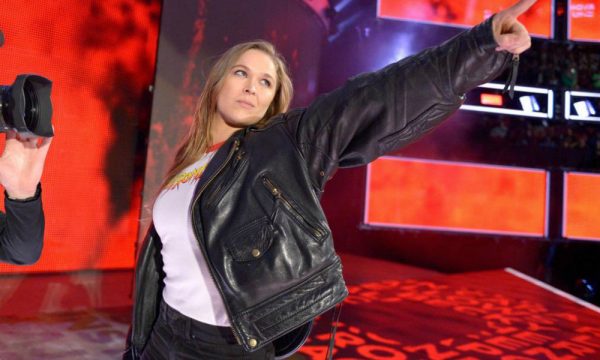 In 2018, female WWE superstars continued to make history. In the main event, we saw the first ever Women Royal Rumble Match.

The match featured surprise names from the past, present and NXT. In the end, Asuka continued her then undefeated streak by winning.

Heading into the match, there was speculation of Ronda Rousey appearing. She was basically all but confirmed for a run with WWE.

After the match, Asuka stood in the ring with Alexa Bliss and Charlotte Flair also present. By winning, Asuka would challenge one of those ladies at WrestleMania 34.

Then, unfamiliar music played and Rousey headed to the ring. She spent a few minutes looking at the three wrestlers before leaving and pointing at the WrestleMania marquee.

One person not thrilled with the segment was Nikki Bella. She discussed her reasons in the Bella Twins’ new memoir Incomparable.

“It was nothing against Ronda — it is thrilling that she is at WWE — but it was a bit of a slap in the face to all the historic women wrestlers who had come out for the match, the main event, only to have the moment upstaged by the Ronda announcement,” wrote Nikki.

Oddly enough, Rousey and Nikki eventually shared a ring together at the Evolution pay per view. They were the main event for the first all-women’s pay per view produced by WWE.

In the end, Rousey retained her title. She would late drop it to Becky Lynch at WrestleMania 35 and is yet to make a WWE return.

Nikki’s in-ring career is seemingly over as well. She is engaged to Artem Chigvintsev and is expecting a baby later this year.

At the same time, Brie Bella also confirmed she is expecting her second child with Daniel Bryan. The twin sisters are due within weeks apart.