In the Bella Twins new book, there are shocking revaluations; including, how Nikki Bella was raped as a child. Also, a new name is getting a big WWE push.

Nikki Bella On Being Raped As A Child

The Bella Twins dropped new autobiography called Incomparable and it is shocking. Nikki Bella revealed she was raped twice during her childhood.

Nikki said the first time occurred when she 15 years old. The former Divas Champion continued how the person was someone she considered a friend.

Then, there was another incident a year later with a different individual. Nikki claimed to be drugged by a man who was in college.

Below, is an excerpt from Nikki.

“There is the horrible offense in the moment, and then the shame and blame that follow and feel almost worse than the original pain,” wrote Nikki. “When something like this happens to you, you understand the blame-the-victim mentality, how easy it is to feel shame rather than anger, how easy it is to feel like you could have stopped it yourself.”

“When that happened to me, I immediately just felt so ashamed and blamed myself, and that’s what made me want to keep it such a secret,” continued Nikki. “And keeping that a secret and blaming myself, I started to lose my confidence. I started to disrespect myself. And then the relationships I got into at a young age, I let other people disrespect me and felt like, that’s okay, this is what I deserved.”

Nikki continued how it took a long time to accept what happened and she would attend therapy on and off. She saw the #MeToo Movement as a way to help others.

Now, Nikki is retired from WWE and will enter the Hall of Fame after COVID-19 is handed. Also, Nikki and Brie are both pregnant.

Incomparable is now available for purchase.

Nikki Bella got raped twice, lost her father at a young age, dealt with body shaming and dealt with the so much hate from majority of the wrestling fans with such grace and positivity. This woman deserves all the love and support in the world. #wwe #nikkibella pic.twitter.com/GfKj9kUXag

We must protect Nikki Bella at all costs! I will not tolerate any hate about her on my tl.

On this account we go to war for Nikki Bella. I make myself clear.

Nikki Bella is amazing. Pass it on. pic.twitter.com/VV8tbUyf5w

Nikki Bella is a strong ass woman who deserves the world. She does not deserve the hate she gets. Im riding for her EVEN harder now idc. I love her ❤️ 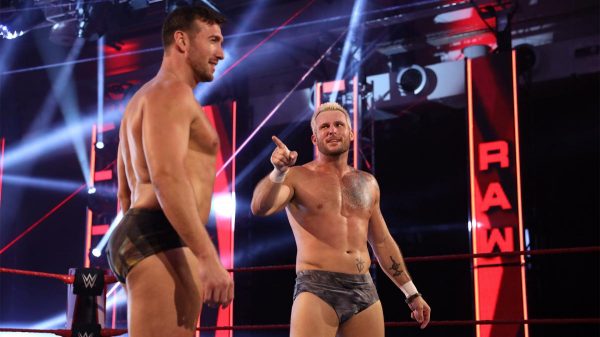 With WWE having to air from the Performance Center due to COVID-19, we are seeing many unfamiliar names. To help add depth to the main roster, some of the lesser known stars from NXT have been appearing.

After the win, MVP approached both superstars backstage. There has been speculation of MVP forming a stable.

Apparently, WWE sees potential in Vink and the win was not a one and done deal. According to PWInsider, Vince McMahon has long-term plans for Vink.

The idea is to book him similar to when Braun Strowman was in the Wyatt Family. Years after he left the stable, Strowman would capture the Universal Championship.

As of now, both Vink and Thorne remain listed on the NXT roster. But, everything is fluid right now in WWE.