BOMBSHELL: Phil Robertson Meets The Daughter He Never Knew About

Phil Robertson just found out he has a daughter. This story of redemption, faith, and forgiveness is an example of how God loves and helps restore us.

Congratulations! It’s a girl! Phil Robertson recently discovered that he has a daughter from an affair. A DNA test confirmed the results which Phil and his sons announced on their podcast.

The 45-year-old woman is appropriately named Phyllis. Like her father, she is a Christian.

The Robertsons are sharing this story as one of redemption, faith, and forgiveness. While detractors will likely try to paint Phil as a hypocrite, this is not the case.

He has always been honest about his poor behavior in the past. This story highlights the dramatic turn Phil took when he turned to God. It also shows how the Robertsons always have room for family.

Phyllis was given a DNA test by her son. After getting the results, she concluded that Phil was her biological father. She wanted to confirm and meet him,  not for financial gain, but to find answers to questions she has had about her heritage and family.

God redeemed me 45 years ago, but He didn't stop there. 45 years later God is continuing to restore me. He has brought me to my long lost daughter, and I love her.https://t.co/pzzpynUsXZ

Phyllis, who has done mission work around the world, wanted to let her father know that he has a daughter, but didn’t want to disrupt his life or bring conflict to his marriage with his wife, Miss Kay Robertson. She decided to deliver a letter to Phil, and he could decide if he wanted to pursue a relationship with her.

She visited the Louisiana church where Phil is an elder. But the meeting almost never happened; Phyllis had second thoughts about finding her father. “At one point I cried; I was like, ‘I don’t know if I can do this,'” she said.

Phyllis, with her husband encouraging her, mustered up her courage and ventured into the church. That’s where she saw her father for the very first time in her life. Phil just happened to be preaching that day.

She didn’t confront Phil at the church. Instead, she sought out his son, Jase Robertson. Phyllis didn’t reveal her identity; she thanked Jase for the church service and gave him a letter to give to his father.

Although Jase said he would give the letter to his father, that didn’t exactly happen. Weeks later, Al Robertson saw a letter for Phil and mentioned it to Jase, and he remembered he received a letter much like it. 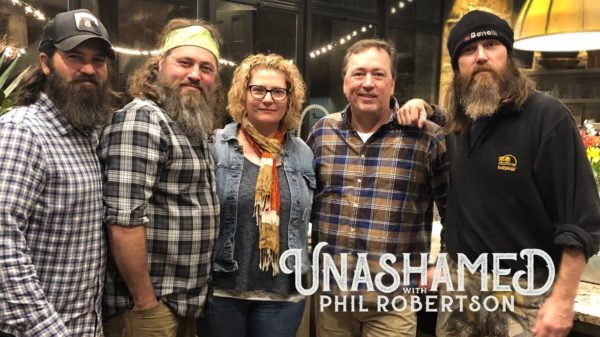 He has admitted to having affairs in the past before he found God. Phil became a Christian by the 1970s, so it was hard for Phil’s oldest son Al to imagine the “Duck Dynasty” patriarch of having an affair after that point.

But after further looking at the timeline of events, Al realized that this was actually possible.

“Well once we get into that and start looking at it a little more deeply, I’m like, ‘Oh woah, woah… there might be something to this,'” Al said.

Phil and Miss Kay married in 1966. They had a rocky marriage as Phil drank heavily and cheated on his wife.

They found a way to stick together despite the betrayals. It appears that Phyllis was conceived right before Phil became a Christian.

The Robertsons regularly receive letters from people claiming to be relatives. They usually include an ask for money, but that’s not what Phyllis was seeking. She is a Christian and wasn’t asking for anything.

Phyllis was born at the tail end of Phil’s years of philandering. It was right before he accepted Jesus Christ as his Savior.

“You were born, and he [Phil] was born again in the same year,” Jase told Phyllis.

Phil took a DNA test to confirm this suspicion. It concluded with 99.9% certainty that Phyllis was his daughter. She is indeed a Robertson.

“God is a God that restores broken people. I was a broken mess, a slave to my desire,” Phil said. “God redeemed me 45 years ago, but He didn’t stop there. 45 years later, God is continuing to restore me. He has brought me to my long-lost daughter, and I love her.”

You can watch the Robertsons tell the story of meeting Phyllis in the “Unashamed” podcast Phil conducts with his sons, Al Robertson, Jase Robertson, Willie Robertson and Jep Robertson below.