During a taping of RAW on Tuesday, a star was hurt in a match with Nia Jax. Also, Becky Lynch is talking about choosing a family over wrestling and WWE.

People have said Nia Jax is dangerous and her recent match with Kairi Sane adds more fuel as the RAW star was hurt. And, Becky Lynch opens up about wanting to be a mother over a wrestler.

People describe Nia Jax as athletic, gorgeous and tough. Also, they see her as a danger inside the ring.

That trend continued this week when WWE taped next week’s RAW on Tuesday. During Jax vs. Kairi Sane, a bump did not go as planned.

Sane was busted open after being whipped into the steel steps at ringside. We will have to see if WWE airs the match on RAW or scratch it.

During the Wrestling Observer Radio, Dave Meltzer mentioned Sane was knocked silly. It is not known if the injury is concussion related or will cost Sane to miss time.

Nia Jax really needs to stay away from Kairi how many times has she hurt her now https://t.co/iBO4lZmqAI

— Faithful Disciple of the Monday Night Messiah (@FaithfulMessiah) May 21, 2020

Do not forget, Sane was concussed during the main event of TLC in December.

Meltzer continued how there is no heat on Jax. People are speculating that Sane might have tripped or took the bump with too much force.

Jax just returned to TV, after missing a year of action due to surgery. She is currently working a program with new RAW Women’s Champion Asuka.

Asuka defends the title against Jax at Backlash. The events takes place June 14 from the WWE Performance Center. 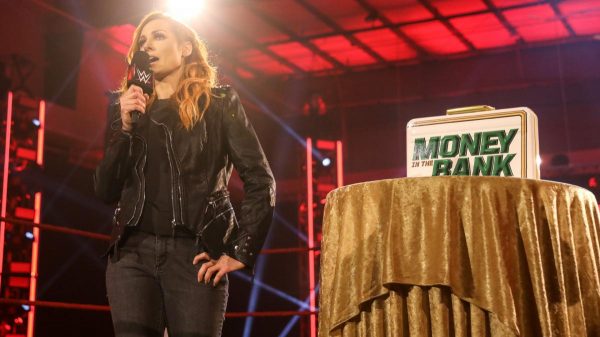 Becky Lynch opened RAW last month with wonderful news. While she had to leave WWE, the reason was justified as she is having a baby.

The good news was met with some criticism. Jim Cornette stated Lynch’s pregnancy came during her peak as she was the highest paid WWE female talent last year.

Recently, Lynch recently spoke with Charlotte Gibson of espnW and her pregnancy was discussed. While Lynch admitted taking time off was hard, starting a family was the right decision.

“Well, it’s tough because I’ve given my whole life to wrestling and to moving forward in my career,” said Lynch. “But this was a choice that, for me, felt like the right one.”

“For me, this was the right time to go and start a family, something that I’ve always wanted to do. And so I feel like I’ve achieved nearly everything I could achieve in wrestling.”

“I think there’s nothing more important than family. And I’m so excited to experience that and to have this other person that is half me and half the love of my life that I get to show love.”

She noted how current WWE superstars have juggled being a mom and wrestler. That includes Asuka, Mickie James, Maryse and Lacey Evans.

There is no way of predicting Lynch’s wrestling future this early. The offer to return will always be on the table, but she might want to focus more on her family.

“I don’t know what that’s going to look like when I do have one, and that’s my priority,” said Lynch, “I’ll tell you, it’ll give me more motivation than ever, I could imagine. But, this isn’t the end of me, one way or the other.”

Lynch will have plenty of time to make that decision. If she does return, working a limited schedule could always been an option.

Lynch and her fiancé Seth Rollins are expecting their first child together in December. They got engaged in August of last year.