Mike Tyson is looking to box again and his opponent could be AEW's Chris Jericho? Also, WWE has banned another move after a scary spot a few weeks ago.

Mike Tyson wants to box again and it could happen for AEW against Chris Jericho. And, WWE has banned another move.

All Elite Wrestling’s (AEW) Dynamite this week ended in chaos as Mike Tyson and his crew got into it with Chris Jericho’s Inner Circle. The closing segment got plenty of media attention and people want to see what is next.

Look for the program between Jericho and Tyson to continue. Apparently, some type of wrestling match might not be where AEW is headed.

While talking with ESPN, Jericho noted that he does have some boxing training. Plus, he is one of the best wrestlers for any wrestling promotion.

With all that combined, Jericho and Tyson could be preparing for some type of boxing match.

“Obviously, the idea is to do something more,” said Jericho. “That’s the thought process, I think between both parties.”

“What that is at this moment, we’re thinking and discussing. Look, Chris Jericho versus Mike Tyson in a wrestling match, in a street fight, in a boxing match, would be big.”

“I’m not Mike Tyson. I’m not 1/1,000th of Mike Tyson, but I’ve been boxing for six years. I know how to box. I could win fights on my own against people of my skill level. So if that’s what he wants to do, that works too.”

“Whatever he feels comfortable with, I can make it good. That’s what I do for a living. That’s what I’ve been doing for 30 years.”

“But to me it’s the buildup and the angle and all the things we can do. That’s what wrestling is all about — the storyline. The match is the cherry on top. But it’s the build that’s really the most entertaining part, and the part that gets people really involved.”

In recent months, Tyson has looked to be in phenomenal shape and many believed he had something planned. The youngest heavyweight boxing champion had called out some names for exhibition bouts.

If AEW can get Tyson vs. Jericho in some type of boxing match, they could see a huge influx of fans. Smart move by AEW to bring in Tyson and pairing him opposite Jericho. 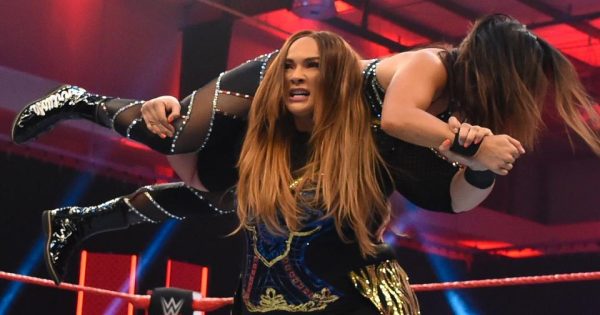 WWE is always looking out for the safety of their talent, which means banning certain moves. That trend continues with the buckle bomb no longer being allowed.

According to PWInsider, WWE decided to pull the move after Nia Jax vs. Kairi Sane from a few weeks back. During the match, Nia hit the buckle bomb and Sane took a rough landing in the corner.

As for now, there does not seem to be any heat on Nia.

The move also drew attention when Seth Rollins would use it. Finn Balor was injured from the move in his pay per view debut and Sting’s career came to an abrupt end.

Of course, WWE could allow the move to be used on occasion if a superstar is given permission. Also, there is always a chance WWE will take the move off the list.