The road to WrestleMania 36 is officially underway as the 2020 WWE Royal Rumble took place. Now, here is the report card and scores from Houston.

The road to WrestleMania 36 is officially underway as the 2020 Royal Rumble took place. Now, here is the report card and scores from Houston. 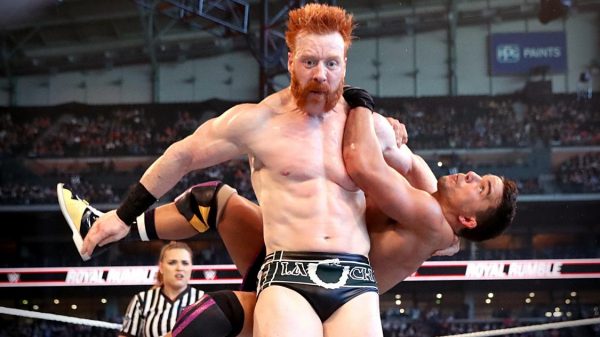 On a stacked card, this match did not fit. Even for a pre-show, some time on Fox TV’s SmackDown would have been better. This was Sheamus’ first match in about nine months and should have been more one-sided. WWE was pushing Shorty G and now he enters a feud with a returning WWE Champion. If the feud was going to take place, it should have been over in two weeks. Sheamus did not have a threat-like feeling, since he was not facing someone who the fans were just starting to accept. Nothing memorable even took place in the match. Grade: B- 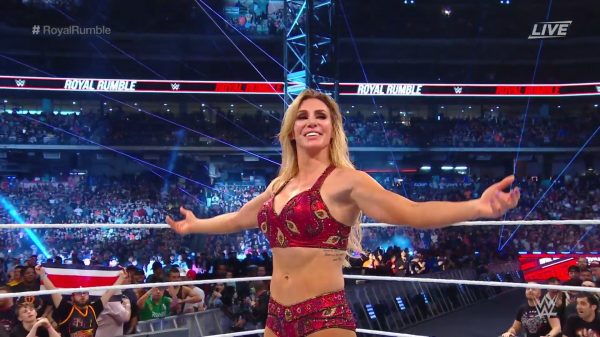 When we knew this was not closing the show, that meant Ronda Rousey was not appearing. Unlike the first two Women Rumble Matches, this one did not have that special feeling. We got to see some familiar faces like Molly Holly and Kelly Kelly. The Santia Marella moment was a good chuckle, but should have taken place earlier in the bout. Bianca Belair was one of the biggest stars after cleaning house the first half of the match. Shayna Baszler got a good pop at number 30 and eliminated a large number of participants. I forgot about Charlotte Flair; having me think Beth Phoenix and Baszler were the final two. Phoenix was certainly not winning and the ending seemed like a dud. Then, Charlotte appears and dumped Baszler over the top rope. While Charlotte is always a strong contender to win, Baszler felt like a clear favorite. Grade: B 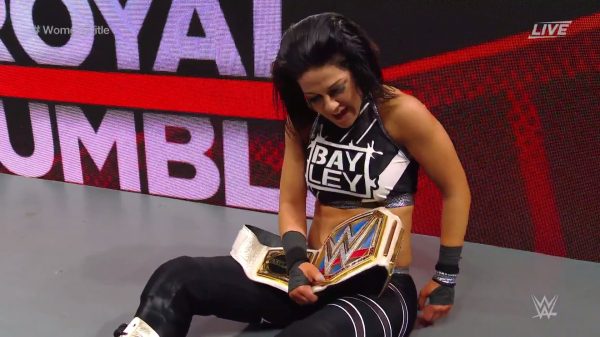 Heading into the match, it is shocking how long Bayley held the belt over the past 6 months. She always felt like a paper champion, but the heel turn continues to work. Lacey Evans still needs work, yet the program with Bayley was a good call. The storyline is a bit too personal, although fans are invested in those moments. Very interesting that Sasha Banks was not present. With no Banks, Bayley needed to push the heel tactics and she looked stronger than ever. Grade: B

.@LaceyEvansWWE doesn’t take too kindly to mockery, @itsBayleyWWE, and now you will FEEL her WRATH! #RoyalRumble #WomensTitle pic.twitter.com/ACeoBWUsiE 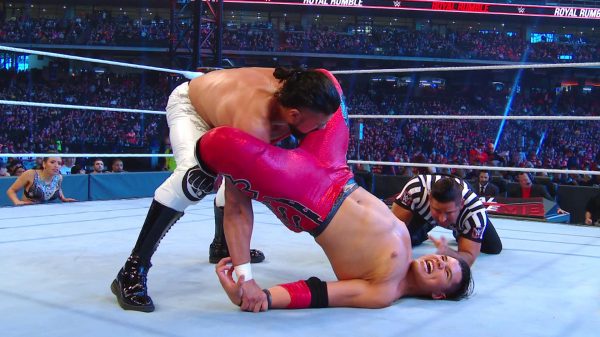 We have seen these two wrestle several times in the past six weeks or so. They usually deliver and there was no difference in their Royal Rumble encounter. I think WWE is in the process of making Andrade feel like a big deal that could work in the main event; so, he needs to regain some of those losses. I thought we would see some tension between Andrade and Zelina Vega, but nothing. 2020 is looking like a good year for the current United States Champion. Grade: B

.@humberto_wwe looks to make the most of his opportunity at the #USTitle against @AndradeCienWWE on the #RoyalRumble Kickoff while @Zelina_VegaWWE keeps a watchful eye at ringside! pic.twitter.com/AMBy10uqjM 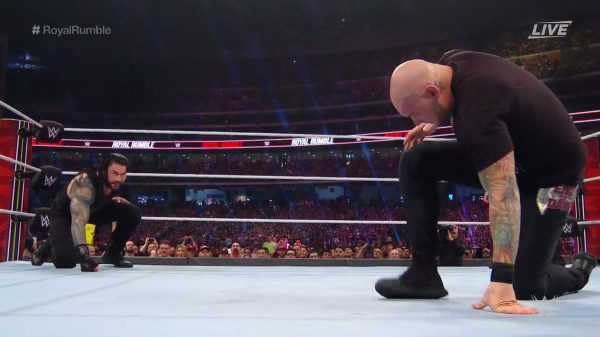 It feels like Roman Reigns and King Corbin have been feuding for over a year. In a sense, Reigns is usually standing opposite several people and Corbin is typically there. Compared to their previous matches, this felt like the best outing by Reigns and Corbin. There was a good amount of battling around the arena and that got the crowd hot early on. At the same time, there was a decent amount of wrestling around ringside. Reigns hitting the spear and getting the pin atop the dugout was a cool spot. That moment deserved more attention from the announce team. Grade: B 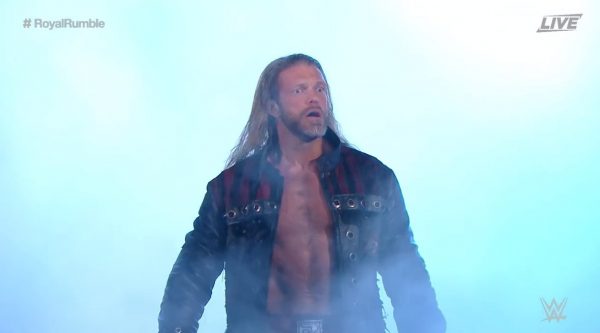 Brock Lesnar eliminating superstars in under a minute was a quick way to anger the live crowd. It felt like half of the match was wasted on Lesnar and we missed out on great moments like John Morrison and Kofi Kingston having more in-ring time. Then, Drew McIntyre kicked Lesnar out of the ring, so Drew’s WrestleMania is looking good. Edge coming out is what got the crowd’s biggest reaction. The short Rated RKO reunion was a nice touch. The final four were all contenders for the big win. McIntyre getting the win is a nice change of pace and makes you wonder what is going happen during WrestleMania season. Grade: B

Strap Match for the Universal Championship: “The Fiend” Bray Wyatt vs. Daniel Bryan 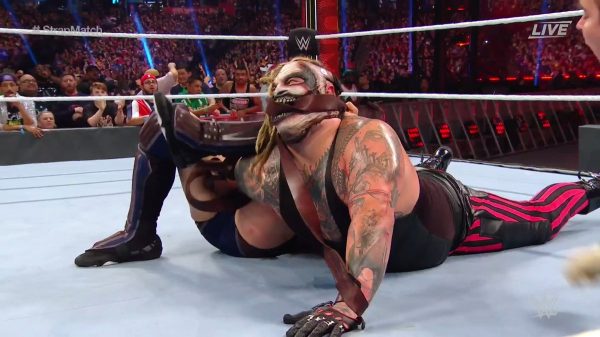 According to the announce team, there has not been a strap match in almost 10 years. The biggest thing to point out is that the red light was not present. Hopefully, that does not change. The Fiend is an unstoppable force, so Daniel Bryan did everything possible. The fallout from the match might also tell a story as Bryan seemed to have trouble staying on his feet. I am curious if WWE is working on a new angle where Bryan appears to have concussion symptoms. Grade: B+ 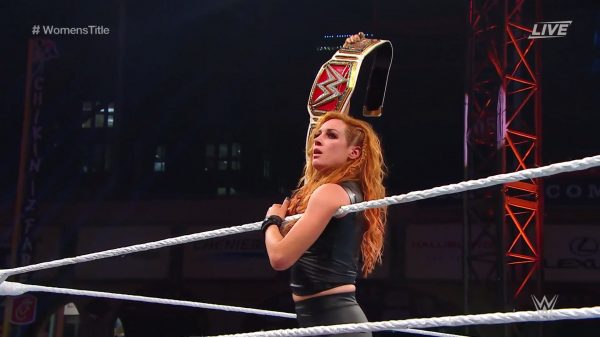 In a rematch from last year’s Royal Rumble, another exciting contest put together by Becky Lynch and Asuka. After such an impressive run, Becky finally got her revenge from a year ago. While I do feel like Becky has lost some of her momentum, defeating Asuka seems to bring everything full circle for “The Man.” I would not mind seeing them compete once more before starting their WrestleMania programs. Grade: B+

What are your thoughts on our Royal Rumble report card?