Former champion Kevin Owens was fired from SmackDown by Shane McMahon. So what could be next for him? And Bret Hart names his favorite WWE superstars.

Could Kevin Owens Be Returning To NXT After SmackDown Firing?

Former WWE Universal champion Kevin Owens was handed his walking papers this past week on SmackDown, as Shane McMahon “fired” him at the end of the program.

But, could Owens be returning to his former home, NXT?

The 35-year-old tweeted out a message of three numbers, “14-24-20,” which spell out NXT in terms of each number representing a letter in the alphabet. Owens held the NXT championship before moving up to the main roster where he also held the Intercontinental title twice and the United States championship three times.

His NXT title reign began in 2015 when he defeated Sami Zayn at NXT TakeOver: Rival. Owens’ run atop the division would last for 143 days before he lost to Finn Balor at The Beast in the East special from Tokyo, Japan.

Owens made his RAW debut back in 2015 and immediately jumped into an angle with John Cena for the United States title. He captured his first main roster title with a victory over RyBack at Night of Champions and became the Universal champion with a win over Big Cass, Roman Reigns and Seth Rollins in a match on Raw in 2016.

Former WWE champion and hall of famer Bret Hart knows a thing or two about rising to the top and becoming a legend in pro wrestling. Hart sees nothing but greatness coming from two current members of the WWE roster: Drew McIntyre and Becky Lynch.

“I always respected big guys when I wrestled them, respected their size and their ability, and tried to bring out the best of them,” said Hart in an interview with Sports Illustrated. “A big guy I’ve been a big fan of for a long time is Drew McIntyre and his work. I’m glad that he had a rebound and he’s doing really well.” 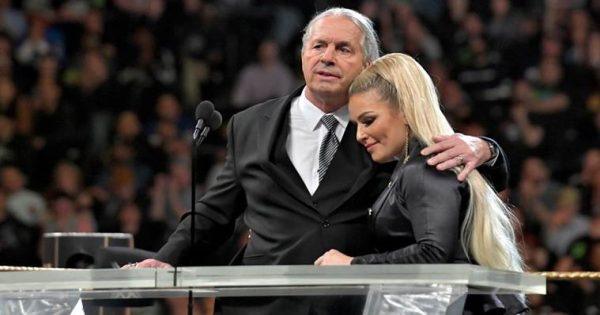 McIntyre bounced around for several years before landing with WWE, including a run in TNA where he won the TNA heavyweight title and was the Impact Grand Champion. He has claimed the NXT title, Intercontinental championship and is a two-time RAW tag team champion with Cody Rhodes and Dolph Ziggler.

As for Lynch, Hart said “Becky’s been around the business long enough to know she has to loo at everything as a challenge.” Lynch headlined WrestleMania 35 with Ronda Rousey and Charlotte Flair, becoming the only woman to hold the RAW and SmackDown titles at the same time.

“She’s already broken some major barriers, and now, she gets to live out her dreams every day – which is magical,” Hart said. “She’s up for any challenge in any match and she’s really focused, really skilled and hard working. Women are stepping into new challenges all over the world and that includes pro wrestling. There’s no limitations anymore and that’s a great thing. I think she can overcome anything that anyone throws at her.”