RAW In A Nutshell: Smashing From LA To Stomping Grounds

Folks, it is the go home show for RAW as we get ever closer to Stomping Grounds. Who will our wild cards be, and could it impact Sunday?

Hello again everyone! We are getting rapidly closer to the official start of Summer. The weather is heating up…the kids are almost out of school, and WWE Stomping Grounds is just days away. Tonight will be all about Superstars smashing from LA to Stomping Grounds. We’ve got the last minute hype for Rollins and Corbin. Will we see Brock? Will he cash in? What comes next for Becky Lynch and Lacey Evans? All that and more, and plenty of hype heading our way as we enjoy the go home show. Let’s dive right in and see how things go, as we crack open this Nutshell!

This one was a bit tough, because while the night had some decent goings-on, the matches and match quality felt a bit….off.

That said, I will take the five man match to determine the number one challenger for the United States Championship.

Because it wasn’t really a match, but rather a squash. That would be Viking Raiders over the Taylors.

Now, the best parts of this? I’d go with the pre-match interaction, where we had a bit of a stare-down between the Raiders and the SmackDown Tag Team Champions, Rowan and Daniel Bryan, and then the tail end of it which gave us the 24/7 Championship exposure of the evening.

But then, we got to the main event, and it was a weird one. Daniel Bryan and Seth Rollins…it ended (the first time) really early when Rowan got involved. It broke down to having like ten guys not in the match just brawl…then the announcement was made to re-start the match, with no one allowed at ringside. Just…bizarre.

Well, sure, we had some better showings…but none so strong that I am going to give up a star of the night.

I am going to go with Reigns putting McIntyre through the table in the luxury suite. 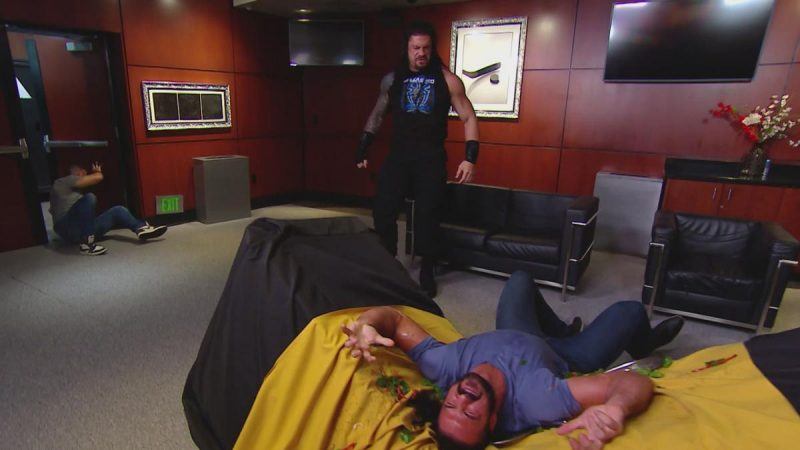 The two guys, I think brothers, whom WWE fed to Viking Raiders (always cringe when typing that). And was it just me or did the one guy have Link/Zelda trunks on? Coincidence, or really odd shot at Cody? 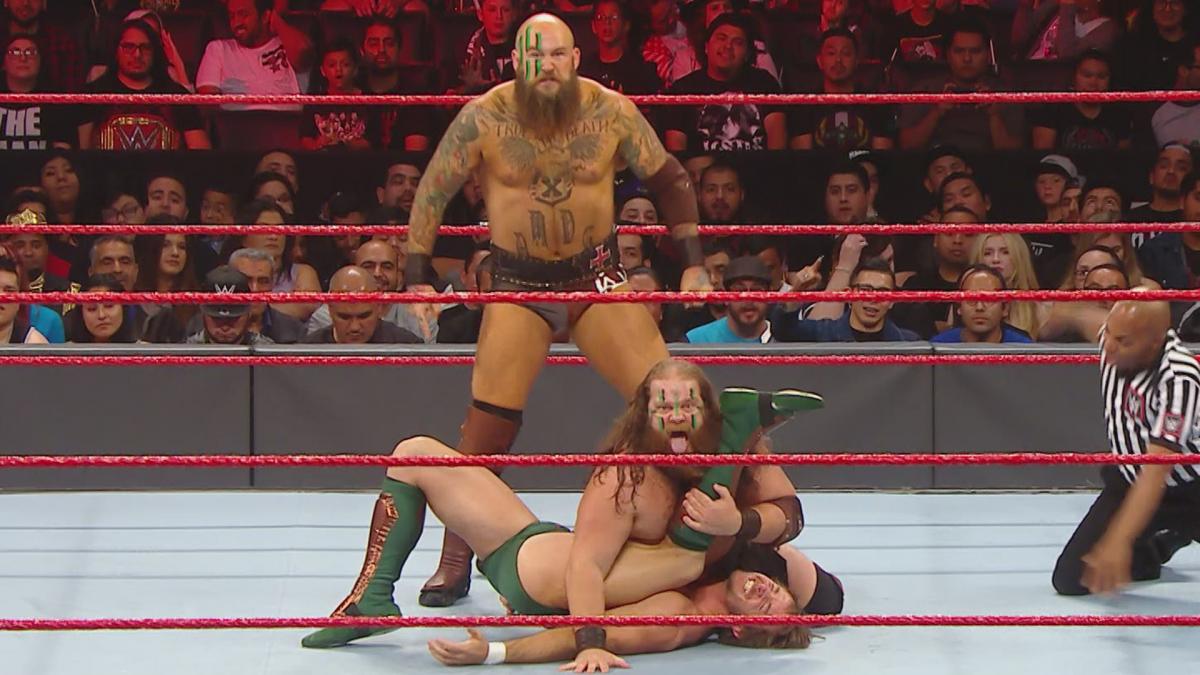 Can I go with Seth Rollins and his one man chair swinging campaign against anyone who would be Baron Corbin’s hand-picked ref for Sunday? Yes, some of the chair shots were worse-looking than they really were…but some looked really stiff too. Elias. EC3. Eric Young. I mean sure, some of those guys were thrilled to get on television for an extended period of time, I am sure…but damn they let Seth swing freely with that chair tonight

Baron Corbin did get a measure of revenge at the end of the show, however. 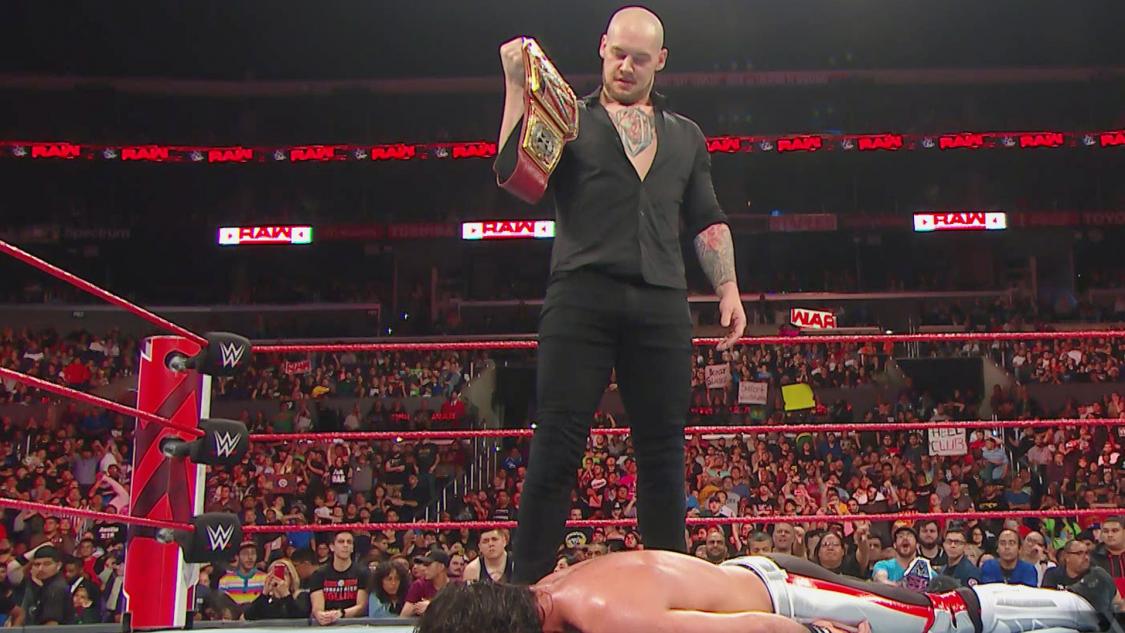 There were a few worth calling out.

First, on the mic exchange ahead of their six man match, Kevin Owens really fumbled some lines between he and New Day.

Later, during the tag match between Gallows, Anderson and The Usos, Gallows and/or Uso really botched the over-the-top-rope heave that Gallows was attempting. if that was “as planned”, it was planned to look like a botch…which I guess is possible…but it looked ugly. I have to think a spot like that only leads to people speculating that Gallows and Anderson are not long for WWE, and have started to check out. 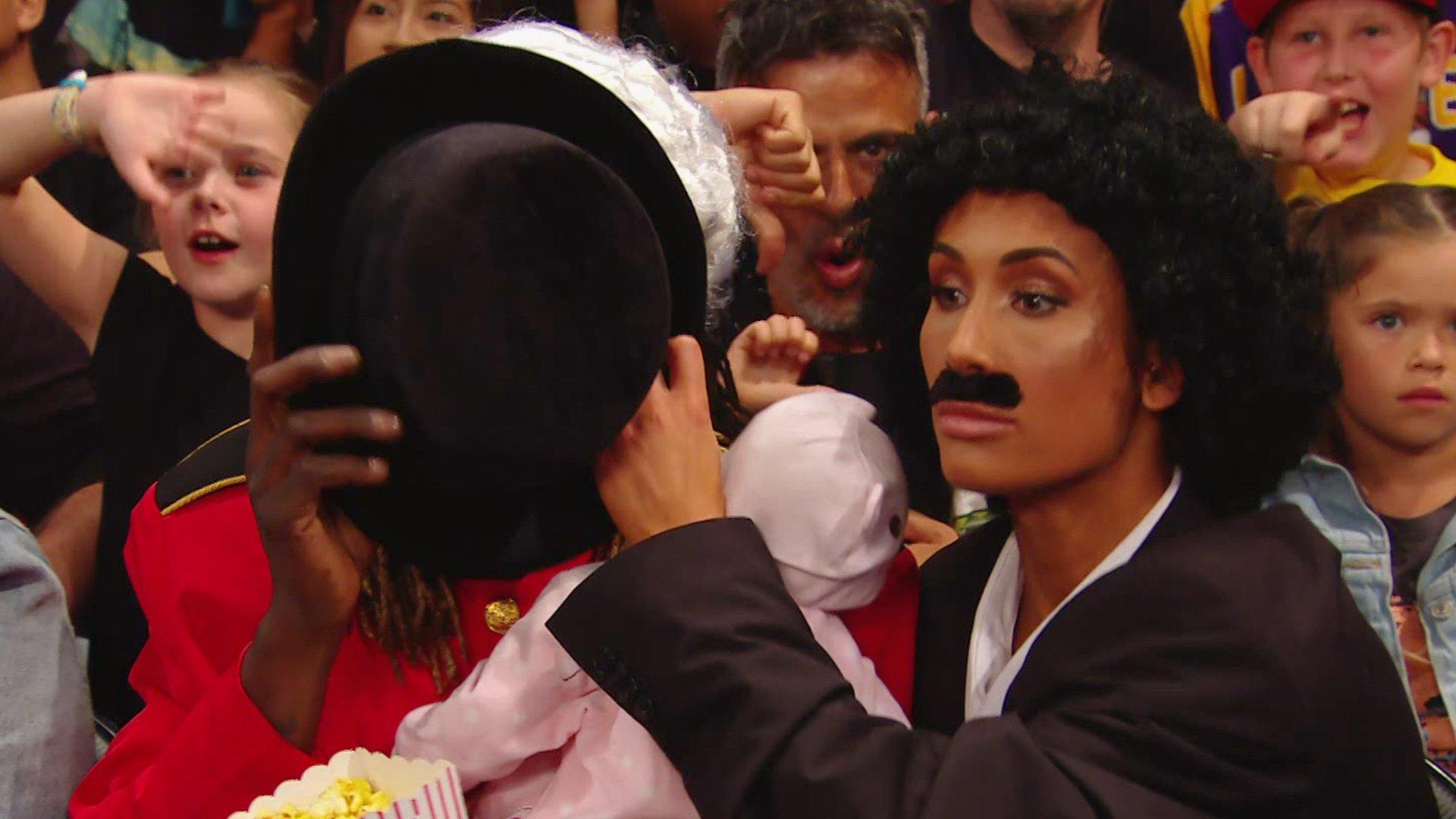 Courtesy of the 24/7 Championship….following the Viking Raiders (God that is still so stupid) win over a couple of jobbers, the camera pans the crowd, and we see a black man dressed up like a Mountie, and Carmella as Charlie Chaplain. Right at ringside. It pains me to say it, but the schtick is growing on me. Does not hurt that I think Truth is doing some of his best work.

Ricochet won the show-opening bout, a five man match to determine the next challenger for Samoa Joe’s United States Championship. That should be an interesting match, since the two have diametrically opposed styles, but both are exceptionally fun to watch.

WWE actually had Hulk Hogan on television…sort of.

They showed the video which Hulk Hogan posted to Twitter yesterday, in support of the United States Women’s Soccer team. Interesting from that was…why on Earth does Hogan have a copy of the more recent WWE belts hanging behind him? He sure didn’t win a few of those…

Latest edition of the Firefly Funhouse was more bizarre than ever. A few thoughts/questions here. First, maybe I haven’t noticed before, but tell me the pig wasn’t a shot at John Cena, and the old man puppet with the horns wasn’t Vince.

Also…I think WWE is very close to running these vignettes too long. Just seems about ready to jump the shark.

I think my biggest gripe out of Monday’s show was the apparent lack of actual wrestling. Sure, we had a handful of matches and most were solid…but it still seemed as though we just are not getting enough wrestling on a wrestling show.

As much as I wished there was more wrestling, what we did get generally fit together better than the last several shows. I did like how guys like Ricochet, Rollins and Reigns worked out this evening.

The best praise I can offer is that this week’s show seemed to suck a lot less  than the last few weeks have.

Not the worst go-home show, but it wasn’t stellar either. At times, like the odd mass interruption of the main event, which lead to a re-started match, just seemed…well….odd.

But, gripe as I can, the show did, I think, show signs of improvement…and that’s a good thing.

WWE Superstar Getting Change, Is Miro Happy In AEW