Things quickly go sideways when Queen Carol Burnett attempts to award war hero Tim Conway a medal for his bravery, but he wants a pony.

“The Carol Burnett Show” brought American families together for eleven seasons of laughs. Classic sketch comedy gave us the opportunity to enjoy humor without any inappropriate language, so everyone could watch it together.

Carol Burnett As The Queen

It was always a treat when Carol Burnett played the Queen. She would try to appear stuffy but when things went sideways, she would lose it in dramatic fashion!

Tim Conway provided the perfect foil to the formal Queen who didn’t quite understand how to handle him! 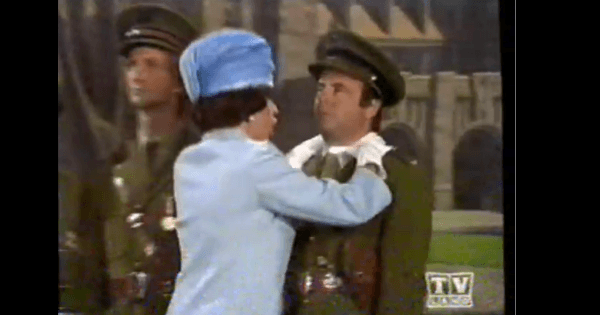 Tim Conway was an essential part of the show’s success. He was so relatable and incredibly silly, often improvising and going off script to make his castmates laugh.

That was often the best part of the show!

In the skit below, Queen Carol is attempting to give Conway a medal for his military service. There is a big problem though as Conway doesn’t want the medal.

RELATED: When Tim Conway Pretended to Be a Dog, Even Harvey Couldn’t Keep a Straight Face

Tim Conway Does Not Want A Medal

This war hero wants a pony instead and he tells the Queen to stick the medal in her ear.

No Queen is used to being treated this way!

However, when a pony is brought out for Conway, he doesn’t think it’s good enough.

He wants a blue pony. By this point, the properly behaved Queen begins losing it.

Decorum Out The Window

By the end of the skit, the Queen and King have lost all sense of decorum with Conway, even threatening to behead this war hero.

If you fondly remember “The Carol Burnett Show,” you will enjoy the video below!

Carol’s physical comedy provided a hilarious interpretation of the Queen.

In the short video below, she has a complete meltdown when Tim Conway is a palace guard who wants animal ice cream.

Her tiara even has to be adjusted!