Ricochet Broke Down After Match With Legendary WWE Wrestler

Ricochet recently revealed he cried after a match with a legendary WWE wrestler. He was so touched by the wrestler's words.

WWE wrestler Ricochet recently talked about how he cried after a match with a legendary wrestler. Ironically, this match did not take place in WWE. 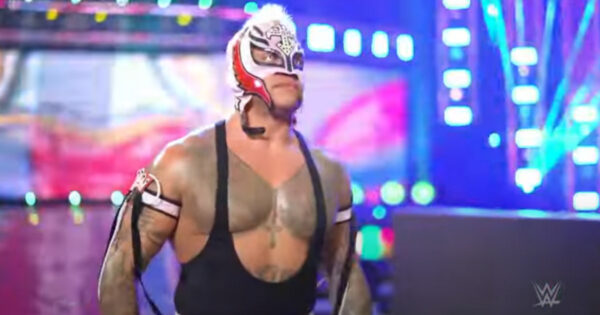 During a recent interview, Ricochet was asked about his favorite match. He instantly recalled a match he had with Rey Mysterio.

Back in the day, the two were wrestling for Lucha Underground. During their time their, they had a match at Ultimate Lucha Dos in 2016.

Ricochet recalls the match as one of his favorites. Even though Rey won the match, it was a life-changing moment for Ricochet.

“A lot of people ask me ‘what’s your favorite match?’ It’s hard for me to pick a favorite match because I have favorites for very specific reasons. But if I had to pick one up to this point of my career, that match has to go top two, top three favorite matches ever. Just because of what it meant to me, what Rey means to me. We might’ve even had a couple before that match, on the independents, one overseas, one in New York. But that one specifically, man, I remember after the match. He leaves the ring and I’m about to leave, and he stops me and says ‘no, this is your moment. You stay. I’m going to get out of here.’ He had just won, but everyone was cheering for me.”

Rey’s Reaction In The Back

Ricochet also recalled how he tried to find Rey once he got to the backstage area. The reaction from the veteran wrestler to Ricochet was absolutely heart-warming.

“I go to the back finally, I try to find his little locker room. I go in there and I’m trying to just say ‘thank you so much for this match. It means a lot to me. You’ve obviously been a huge inspiration, you’ve been someone I looked up to for so long. So, just thank you.’ I was trying to talk to him and tell him all this stuff.”

“He was sitting there, everyone’s around, and I’m just crying. I can’t even speak. Like, literally so emotional, and he’s like ‘no, I know man.’ Even at that moment he was like, ‘man, I loved that. I wish you could’ve met Eddie (Guerrero). Eddie would’ve loved you, bro. Eddie was watching that one for sure.’ As soon as I started feeling better and he says that, I’m literally crying again. I think he knows the respect level that’s there. I think he knows the inspiration and everything. It’s just cool and to share a ring with someone like him.”

Let’s face it, stories like this are contributing to the many reasons why we still love Rey Mysterio. While he may be short in stature, I don’t believe there has ever been a greater wrestler than him.

Fortunately for us, Rey is still an active wrestler. And as always, fans absolutely adore the Luchador for his fast skills and his big heart that is bigger than any fanbase.