RAW In A Nutshell: WrestleMania Approaching In Fastlane

It's another RAW In A Nutshell, and WrestleMania is approaching in Fastlane. As in, after Sunday's show, all eyes are on the big stage!

It’s the beginning of the week, so we’ve got another RAW In A Nutshell, with this week’s theme: WrestleMania approaching in Fastlane.

No, not a typo. Not in the fast lane.

In Fastlane. As in, hey boys and girls, this is your go-home show for the Sunday PPV.

After Fastlane, of course, is WrestleMania.

So, while we expect some final hype for the Sunday show…with WrestleMania less than a month away, WWE has a lot of work to do on the biggest show of the year.

There have been reports that Vince McMahon wanted to blow up the whole show, though that isn’t confirmed or anything. So maybe we start getting more clarity soon?

I mean…time is running short, with WrestleMania approaching in Fastlane. 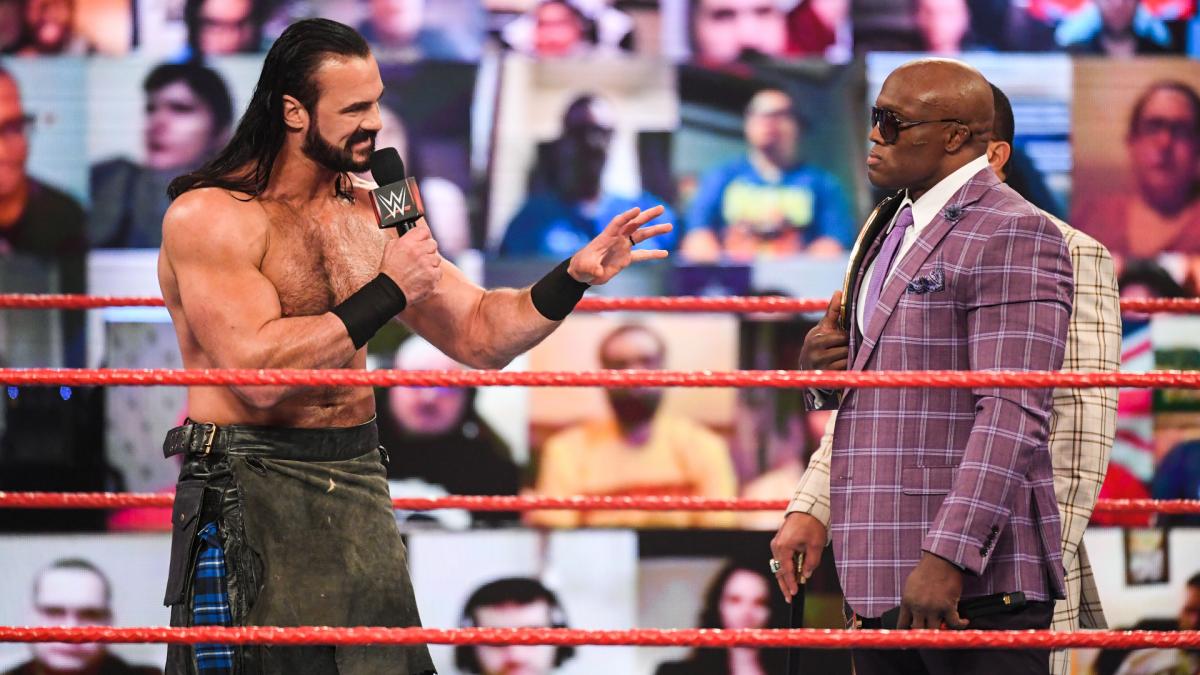 RAW In A Nutshell: WrestleMania Approaching In Fastlane

I can give a nod to the big tag title match, because it was fun. 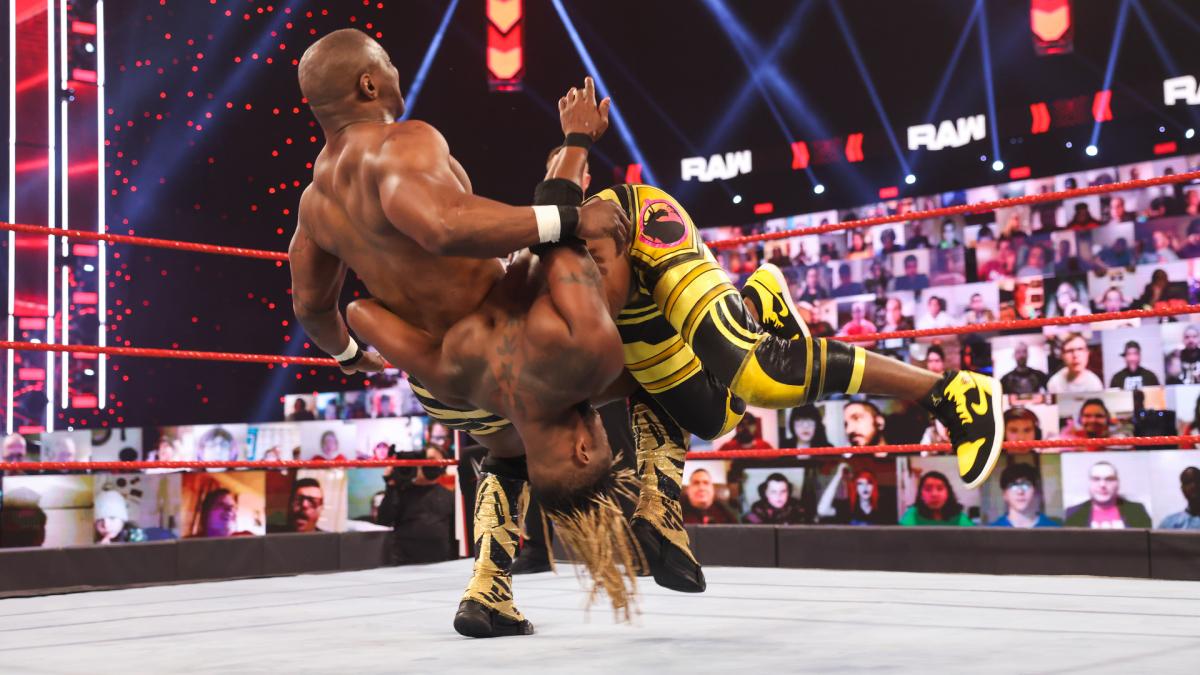 But, for me, for my money, the main event did the trick. Sheamus probably deserves better than being a side dish in the feud of Lashley and Drew McIntyre.

Like, a triple threat, much as they have been overdone, might make sense here. Not that I am rooting for it… 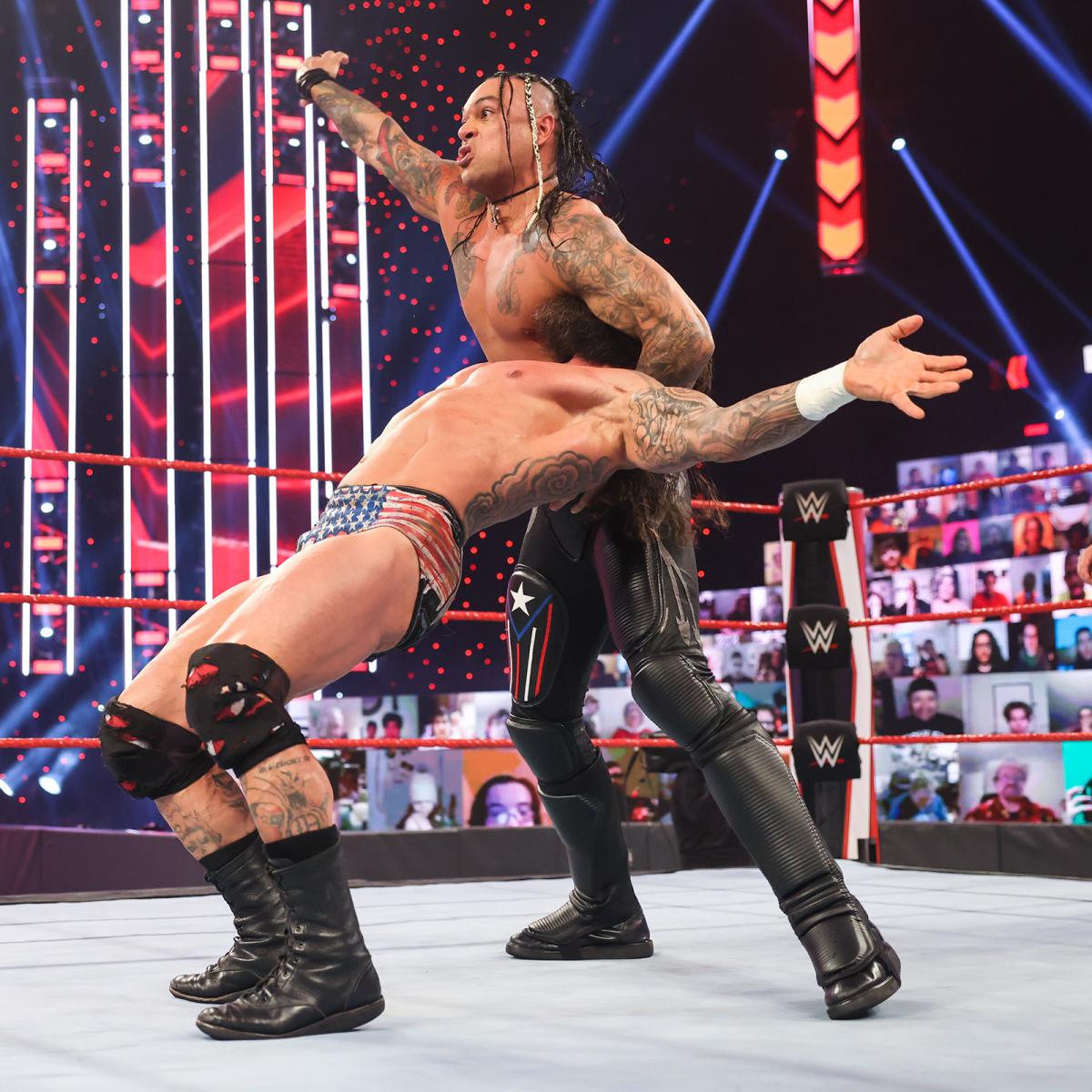 Like, sure, build up Damien Priest…but what’s the point? What a waste of Ryker.

Big congrats to The New Day for yet another tag title reign. 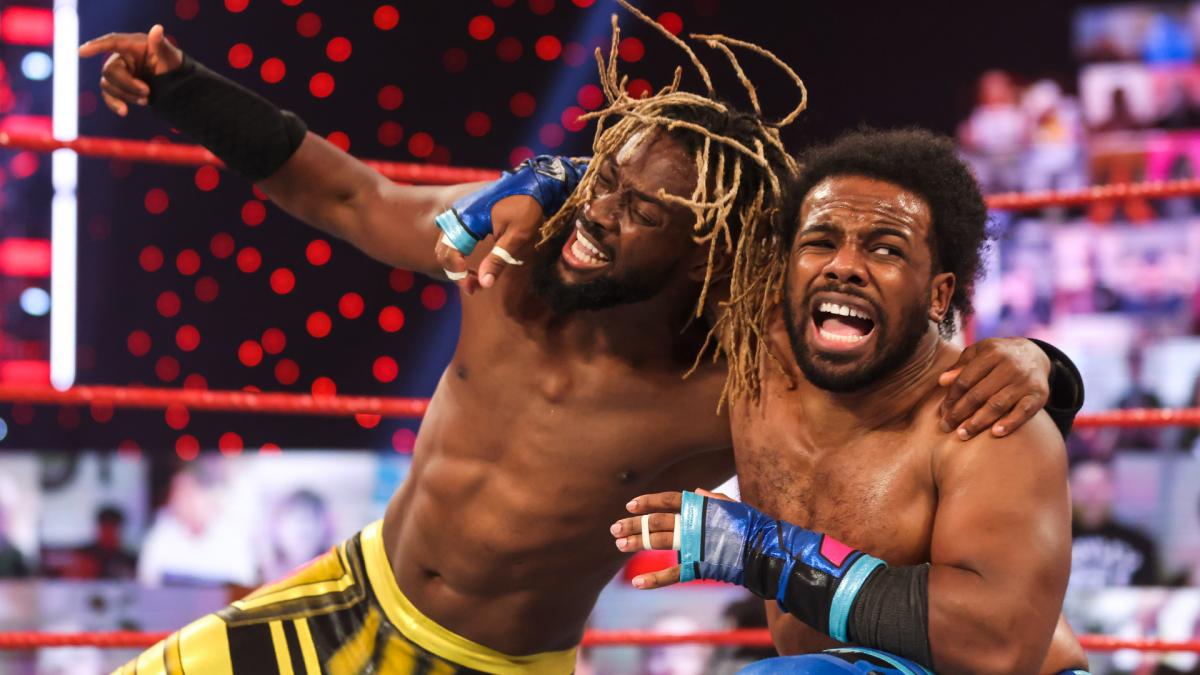 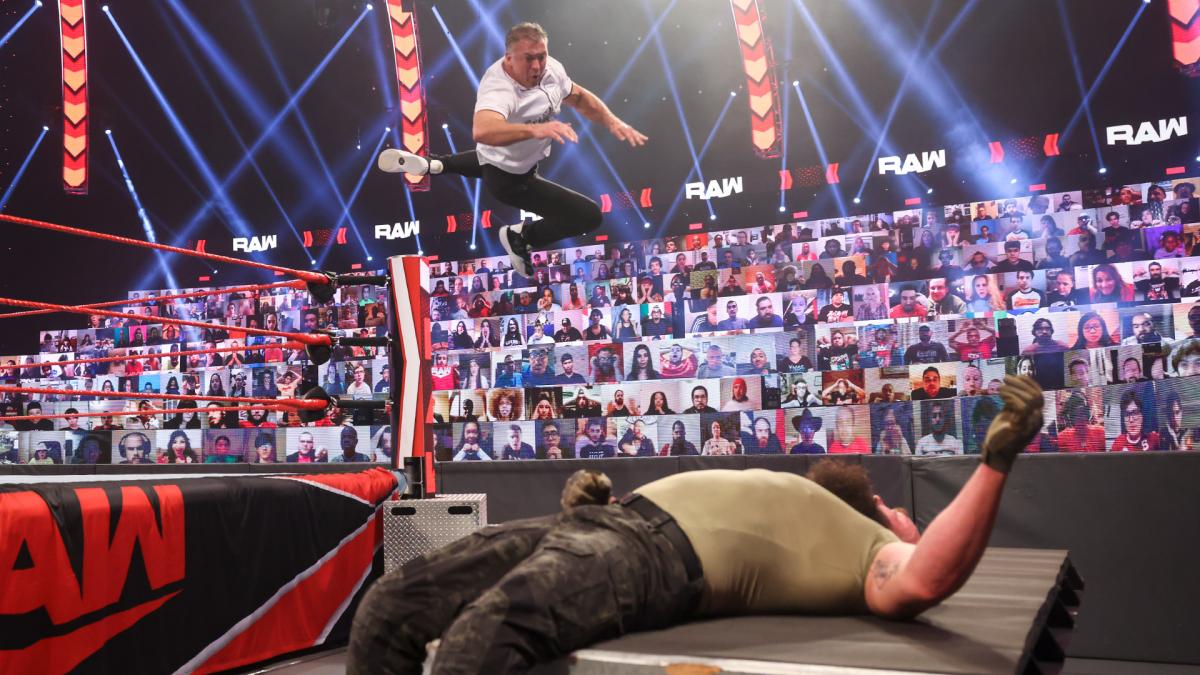 Strowman was slimed. I get into it later, and I do expect it will lead to something themed in Tampa…but either way, how often is it that you see someone slimed? 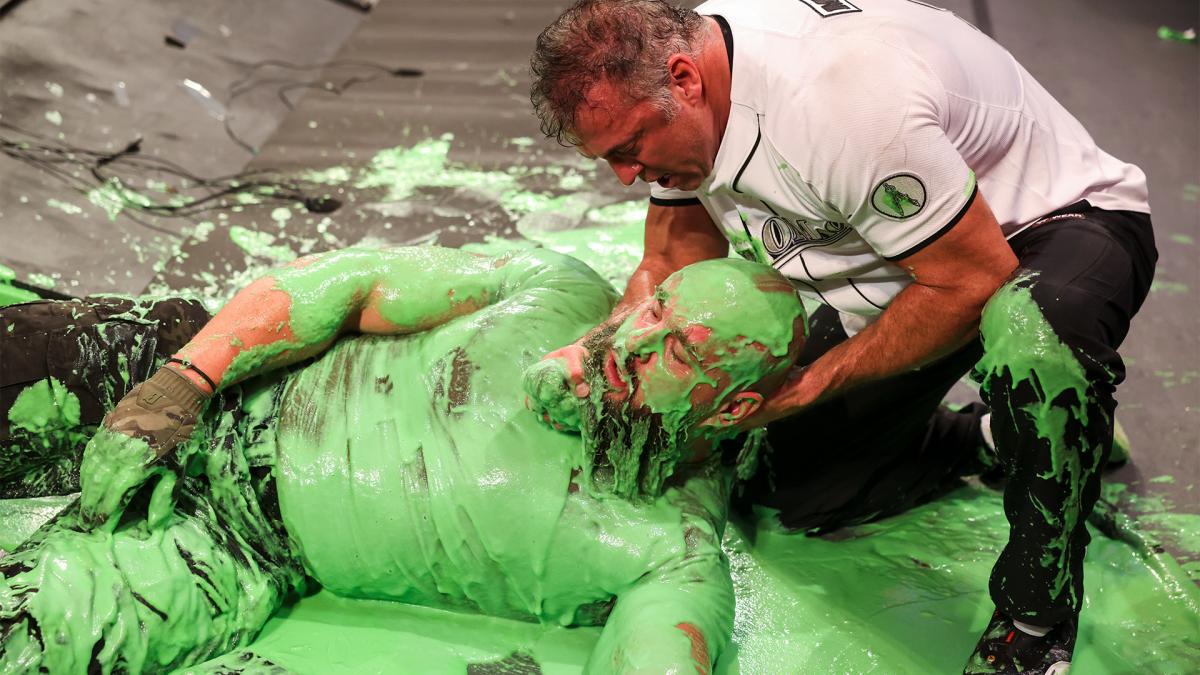 Jaxon Ryker, it has to be him doesn’t it?

I mean, he lost damn fast to Damian Priest. Sure, WWE wants to build up Priest…but can’t they do so without completely squashing Ryker?

OK, maybe he works a televised match between now and then…but…what the heck? 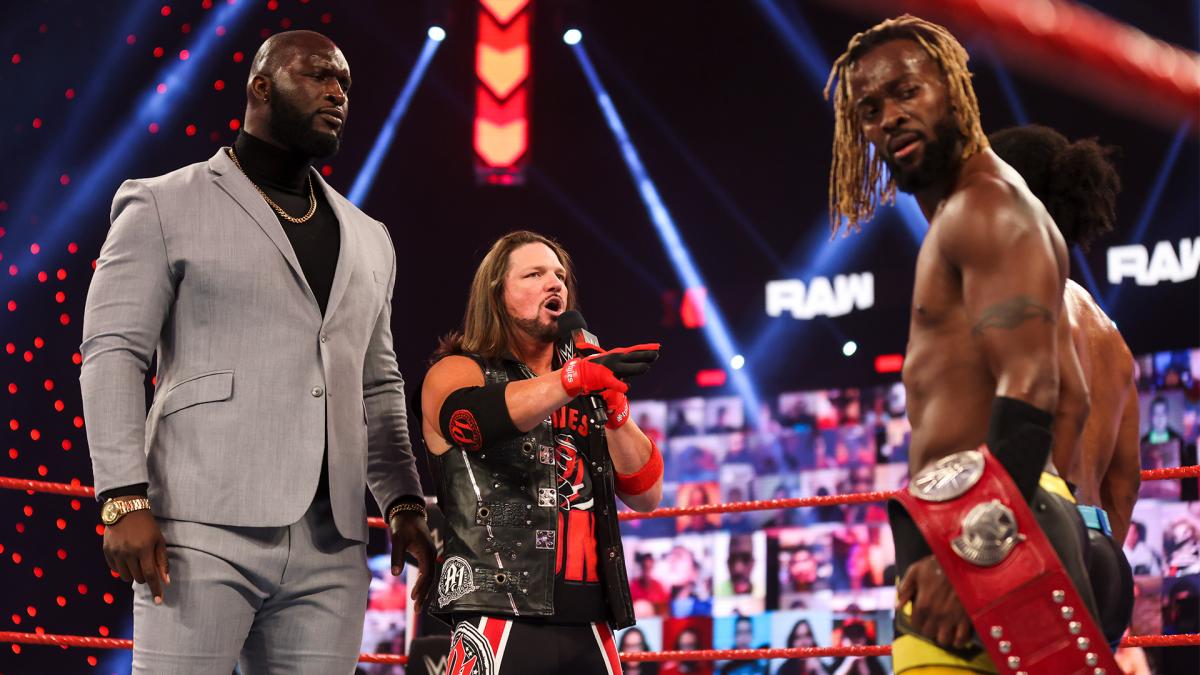 Sure, I see lots of parallels to what HBK and Diesel did way back when, where Diesel was the bodyguard for a while before standing on his own…

But, here’s the thing. Diesel was a wrestler in WCW before coming to WWE. Maybe not the best, but nowhere near as green as Omos.

I was a kid back then, but I am also pretty sure there weren’t any reports of Diesel being insanely green, either.

Yet, here we are. Someone who might have some athletic talents, getting a title shot, without ever earning it.

Hard to take it seriously, and it’s disappointing to see what WWE does to the tag team division.

Also…crazy aggression out of Asuka now that she’s back, and I liked it. Tried to have Shayna Baszler eat the exposed bottom turnbuckle in an act of revenge. 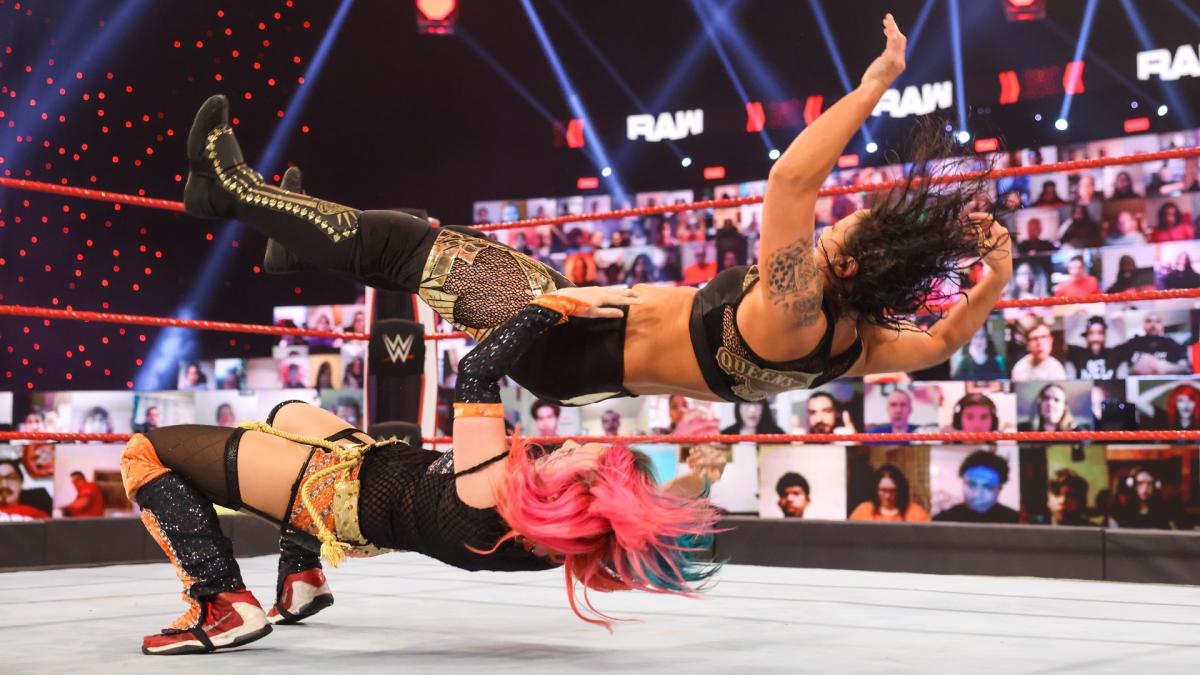 I mean…it might have otherwise been a heel move…but not in this case. I really want to see more of that from Asuka. 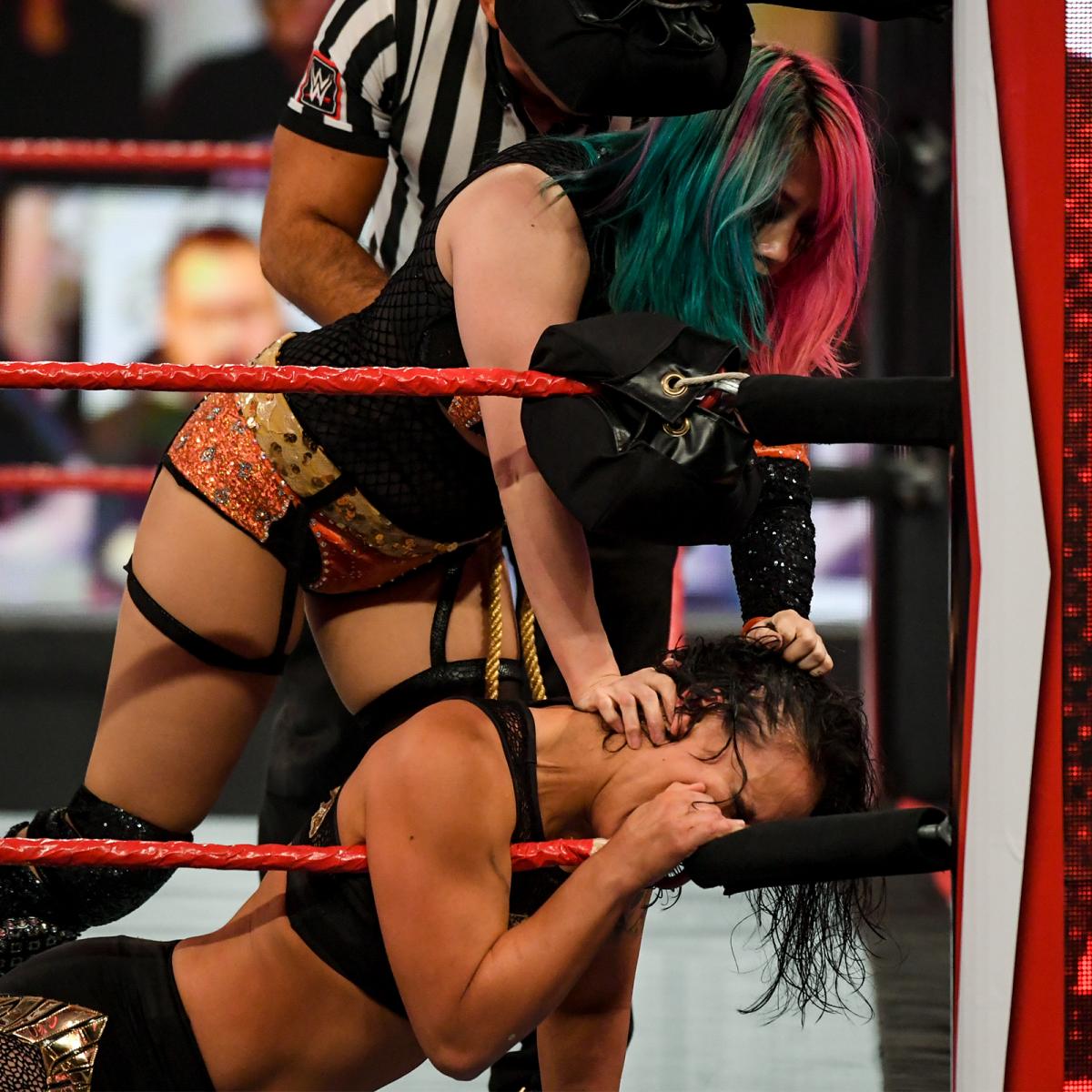 I have to think that the guitar was supposed to break a wee bit. Instead, when The Miz clobbered Bad Bunny with the axe, it stayed intact. 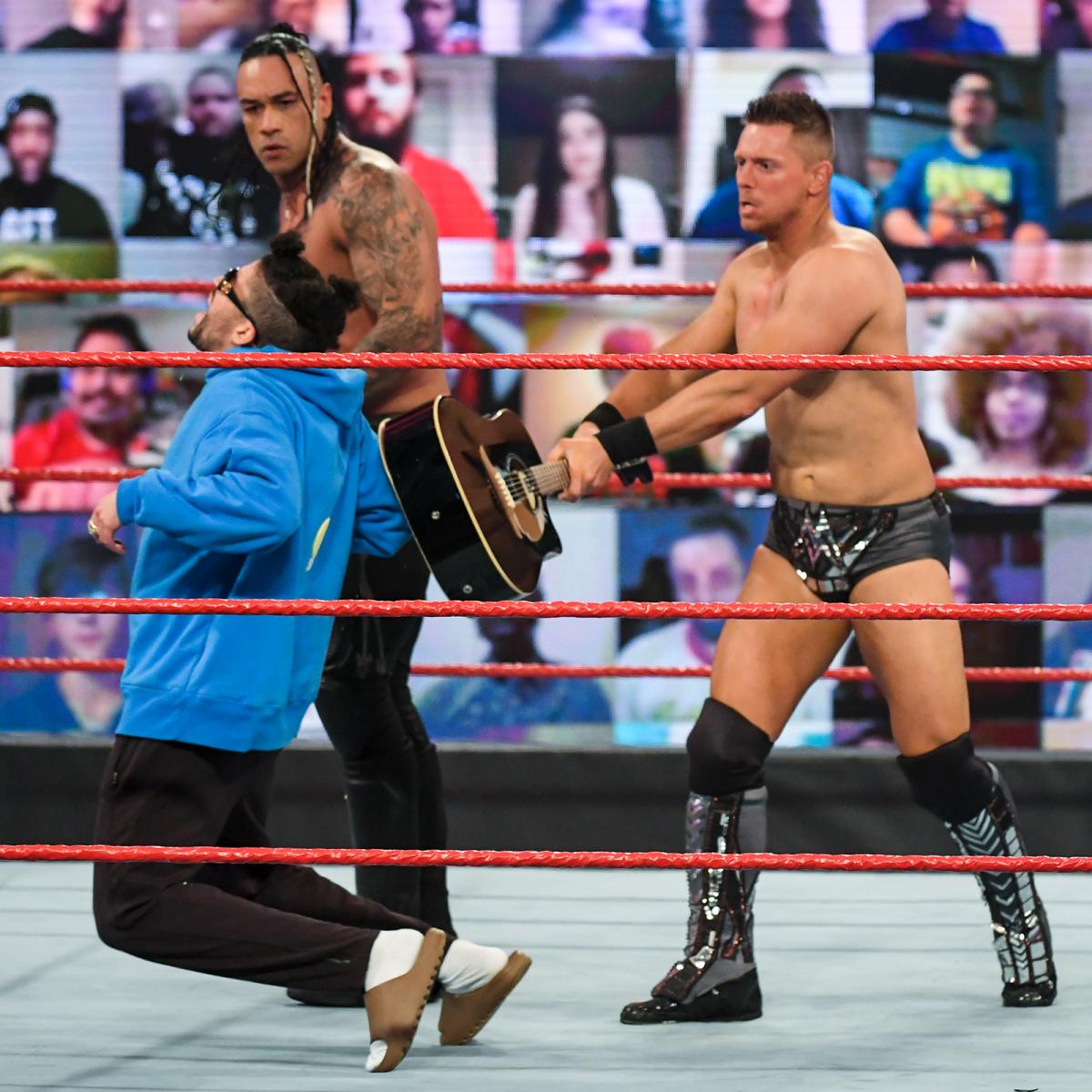 Most of those are usually gigged to break apart, which adds to the visual effect and also makes the spot a bit more forgiving. I can’t help but think Bunny was writhing in real pain. 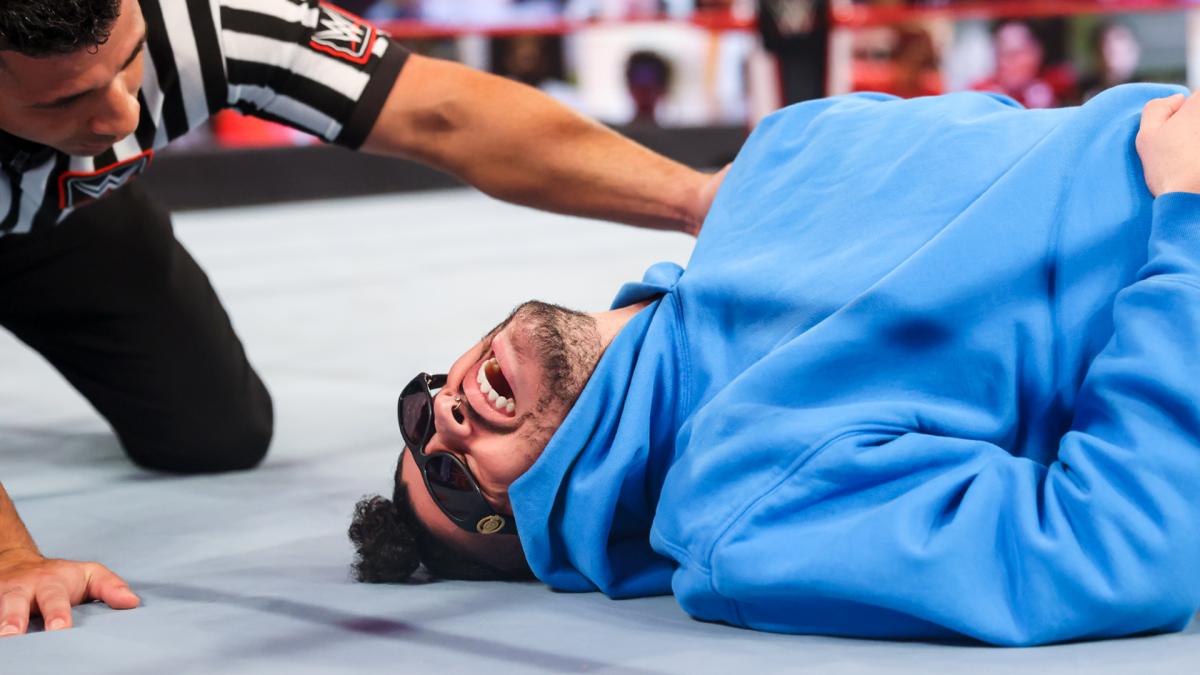 One, R-Truth, Bad Bunny and Damien Priest had a funny chat backstage…which amazingly led to Bunny giving Truth the 24/7 Championship back. 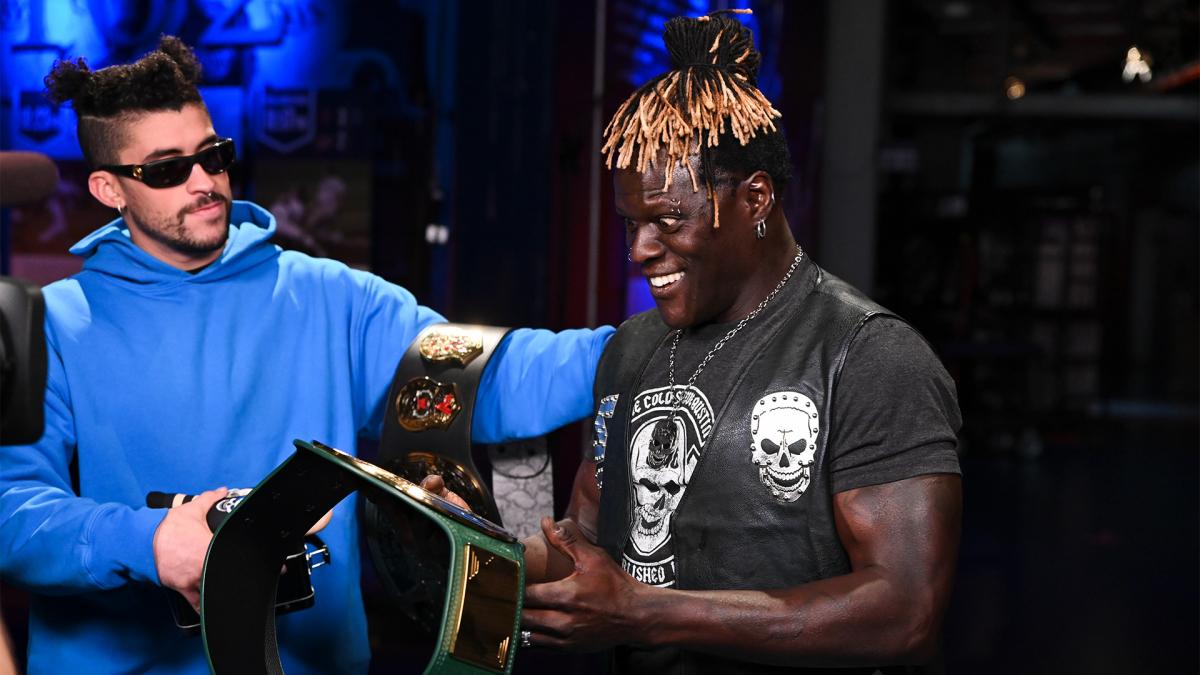 There’s also a new 24/7 Champion, though Bad Bunny wasn’t ever pinned…he just gave it back to R-Truth.

How long before T-Bar and Mace and anyone else in Retribution gets tired of Mustafa Ali yelling at them and finally realizes that they outnumber him, and all of them are bigger than him?

Shane McMahon did a number on Braun Strowman. With WWE craving big spots and WrestleMania moments…do we think we are getting a Nickelodeon themed match, however? 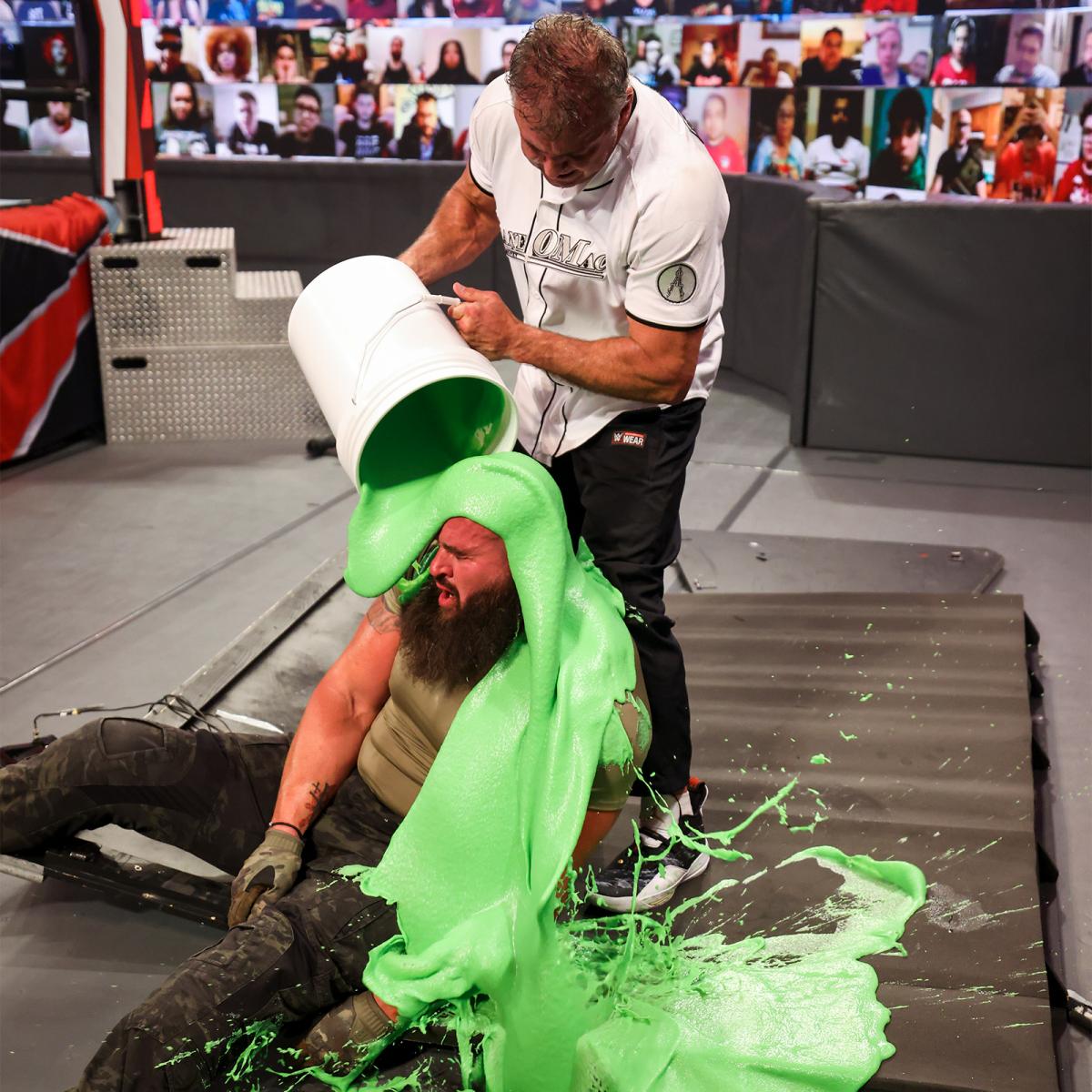 I mean…Shane did slime Strowman. Stranger things have happened…

Can I say I absolutely hate the move to have AJ Styles and Omos challenge for the tag titles?

That clever @AJStylesOrg knew #WrestleMania is the BIGGEST stage for @TheGiantOmos to make his @WWE in-ring debut!

It’s a no win situation, unless Omos suddenly became a decent wrestler.

Tag title shots, ESPECIALLY on the biggest weekend of WWE’s year? Those should go to, you know…ACTUAL tag teams.

Also, I think WWE blew things with Priest and Bad Bunny. Elias and Ryker could have had a better run with a program, where Miz and Morrison makes sense too…but things just were odd. 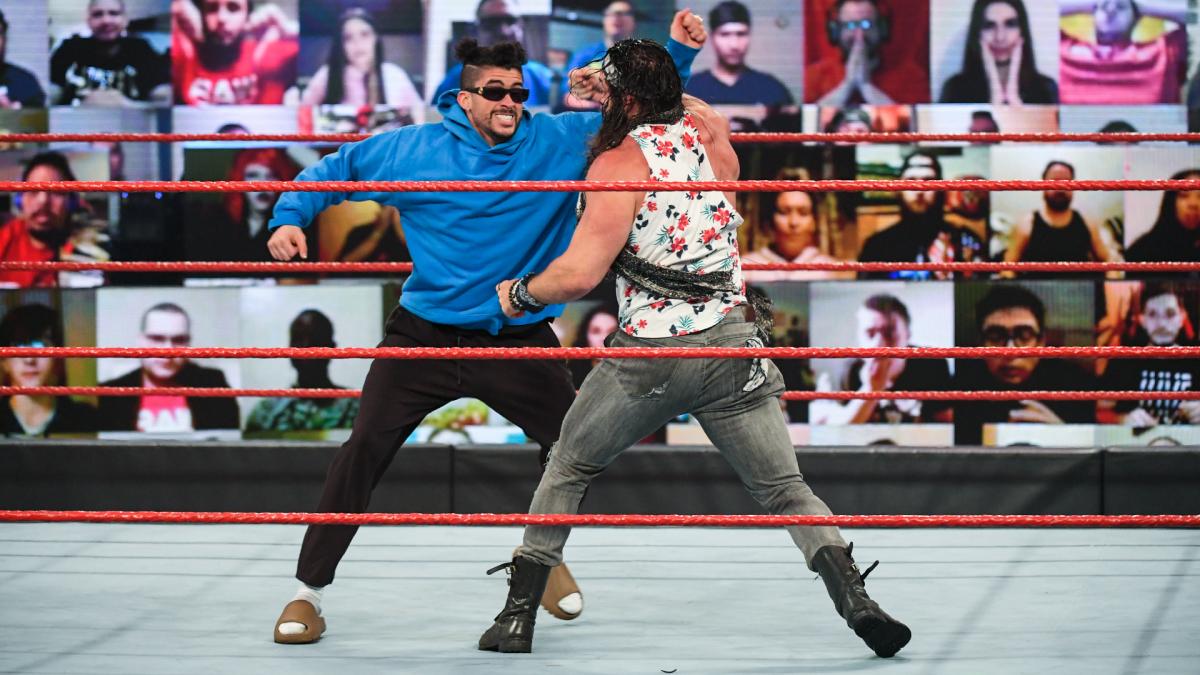 New Day winning belts again was kind of fun…even if I despise the direction things went after.

Lashley and Sheamus with a hard hitting main event. Plus, it’s a fresh pairing in the main event slot…so that’s encouraging.

While some of it felt a bit..forced? It was still a strong and eventful RAW In A Nutshell.

Well…that escalated quickly. Talk about a busy RAW In A Nutshell!

A week ago, we barely had any WrestleMania matches. Figured things would come into focus next Monday, with Fastlane done.

But WrestleMania is in the Fastlane, and WWE gave us several matches to sink our teeth into for the April event.

Does not mean I like all of them, but we have a card coming together. And, for the ones yet to be made…the signs are there (Miz/Morrison against Priest/Bunny, Shane and Braun).

What that all does, however, is make clear one thing: WWE should probably move or get rid of Fastlane. Fastlane is in the way of WrestleMania.

A PPV that close to the biggest show of the year will either take away build, or be overlooked. This year, it kind of feels like both