With AEW Full Gear about 24 hours away, there is talk about Sting appearing. And, Vince McMahon had abruptly ended a big WWE angle.

AEW is promising a big surprise for Full Gear, leading to speculation that Sting will debut for the promotion. Also, Vince McMahon has reportedly dropped the Otis – Tucker feud that just started.

All Elite Wrestling (AEW) has a big event this Saturday, with Full Gear. Titles will be decided and they are even bringing in about 1,000 fans.

Leading up to the pay per view, AEW has been promoting a major surprise. This was not mentioned during Wednesday’s broadcast of Dynamite, but apparently they have something big planned.

During the Wrestling Observer Radio, Dave Meltzer mentioned how there has been growing talk of Sting appearing. Sting’s WWE deal expired sometime this year and recently they pulled all his merchandise.

When WWE starts removing merchandise, it is an indicator that the person is no longer under contract. The company rarely makes official statements when that happens.

In WWE, Sting did not have the best run. He only worked a few matches before suffering a career ending injury against Seth Rollins.

Once Sting entered the WWE Hall of Fame, he announced his retirement. But, he has mentioned wanting to face the Undertaker in a dream match.

As for Undertaker, he expressed similar interest. While not official, Undertaker has also seemingly retired.

In pro wrestling, anything is possible. With WWE producing cinematic matches, there might be a way to get Sting to compete and same for Undertaker.

Still, keep your eyes opened at Full Gear as AEW has promised a big surprise. If it is in fact Sting, there is no word on what role he would have or if he signed a deal with the promotion. 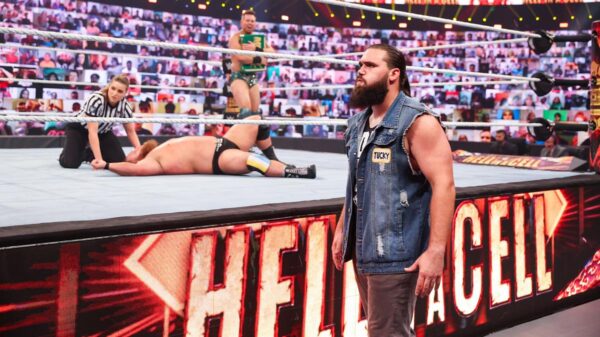 At Hell in a Cell, Otis lost his Money in the Bank (MITB) briefcase to The Miz. The ending saw Tucker turn on Otis, therefore allowing The Miz to get the win.

After the match, Tucker cut a backstage promo before Otis interrupted. They brawled before the camera cut away.

With the two being on different brands, it seems like the feud is already over. Tucker played the jobber role on RAW and Otis did not appear on last Friday’s SmackDown.

The Wrestling Observer Newsletter noted how Vince McMahon lost interest in Otis and Tucker. Hence, why he decided to split them and then quickly drop their feud.

The decision is a bit shocking as Vince was very high on Otis. He secured a kiss from Mandy Rose at WrestleMania 36 and then captured the MITB briefcase about two months later.

There is no reason on why Vince turned on either superstar. The two could always start the feud up again, but that does not seem to be the current direction.

Otis did not work well as holder of the MITB contract. He never teased any cash-ins and only walked around with the briefcase.

As for The Miz, he has already tried to cash-in. By losing the briefcase, Otis now joins Mr. Kenny as the only superstars to lose the prized possession.