WWE is not giving up on the idea of Sting vs. Undertaker as the match is being discussed. Also, a WWE tag team has been pulled from TV and the road.

Sting Vs. Undertaker Being Discussed 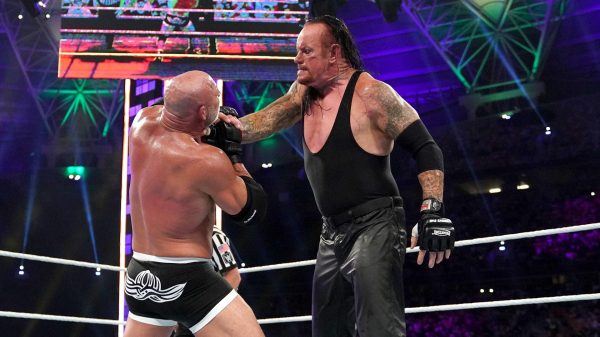 When WWE purchased WCW, there were a slew of dream matches. Some took place, but without Sting, WWE could not fulfill the idea of Sting vs. Undertaker.

Then, Sting left Impact Wrestling and signed with WWE. Before a potential match with Undertaker could happen, Sting suffered a neck injury against Seth Rollins. That seemingly ended Sting’s in-ring career, as he announced his retirement later during his WWE Hall of Fame induction.

Now, there is talk of Sting returning. It seemed possible for the upcoming Super ShowDown event in Saudi Arabia, but TalkSport reports that WrestleMania 36 is now being discussed.

Sting was reportedly in talks with WWE for a role during a Saudi Arabian event. That didn’t come to pass, but a new rumor says that WWE could have something even bigger in store for the Stinger.

FROM THE RUMOR MILL!:

Sting- could be back in the ring as early as Super ShowDown as a face to face could happen between he and The Undertaker leading to the one on one match at Wrestlemania 36…OR… the two would wind up teaming up against a team at WM 36.

“Rumors are running rampant that the WCW icon has been medically cleared to have another WWE match. And it’s believed that match will be with The Undertaker.”

Since the injury, Sting said the biggest regret was not wrestling the Undertaker. Also, he noted that the Undertaker was the only match he would return for.

Missing from TV the past few months have been The IIconics. While nothing is official, Dave Meltzer mentioned how Peyton Royce and Billie Kay could get repackaged.

As of now, there is no timeframe for a return inside the ring. Despite that, the two remain active on social media; even tweeting during last night’s SmackDown.

I asked about them a few weeks ago. A decision was made to take them off TV. Maybe repackaging, but the idea was they’d be back. https://t.co/gfHtBIUSf2

Royce and Kay have been a hit with fans, but not for their work inside the ring. They are known for their ability to get the crowd going using the microphone.

Like in NXT, the team is mostly comedy. But, they were given a decent chance to shine by winning the WWE Women Tag Team Championships at WrestleMania 35. The IIconics entered as underdogs, although they managed to leave with the title. Yet, they barely defended the belts and eventually lost them in an uneventful title run.

How long does it take for you people to realize they’re not bad in the ring? This is WWE, when a wrestler looks bad in the ring it doesn’t necessarily mean that they are bad in real life, The IIconics wrestled for (6-8) years in the indies

I’m gonna be honest, I haven’t seen #TheIIconics @BillieKayWWE @PeytonRoyceWWE in the #WWE for a while, and all I can think is…

They last fought on the November 18 episode of RAW. The duo were defeated by Becky Lynch and Charlotte Flair. The IIconics were recently pulled from live events, outside of the Australia show in October.