John Cena and Goldberg are big names and WWE has not forgotten about them. And, all merchandise related to Sting has been pulled.

Right now, WWE does not seemed interested in bringing John Cena or Goldberg back to TV. Also, Sting merchandise has been pulled from WWE Shop.

This time last year, WWE had the top WrestleMania matchers figured out. Now, they are going at a much slower pace since everything keeps changing due to COVID-19.

Two names rarely seen on TV include John Cena and Goldberg. In fact, neither has appeared on WWE TV since WrestleMania 36.

As for a return, there are currently no plans. In the Wrestling Observer Newsletter, they noted how WWE does want rush into any match for the megastars.

Cena is currently busy in Hollywood, which causes a problem in the future. Like with The Rock, movie companies are hesitant about letting their actors wrestle as they could get injured.

This is the main reason why WWE has been unable to book The Rock vs. Roman Reigns. There continues to be talk of making the match happen at WrestleMania in a farewell bout for The Rock.

As for Goldberg, he is simply enjoying his time off. Over the past few years, he has been sporadically used.

Cena’s last big angle came against The Fiend Bray Wyatt. They fought in one of the most bizarre cinematic matches ever, with The Fiend winning.

As for Goldberg, he was set to defend the Universal Championship against Reigns at WrestleMania. From the beginning, the plan was for Reigns to leave as champion.

Due to concerns over his health, Reigns opted out of the match about 10 days before the event. Therefore, WWE had Braun Strowman win the belt.

WWE seems interested in having Reigns take on Goldberg and/or Cena at some point. With his new heel status, a win for Reigns would continue to cement his new legacy. 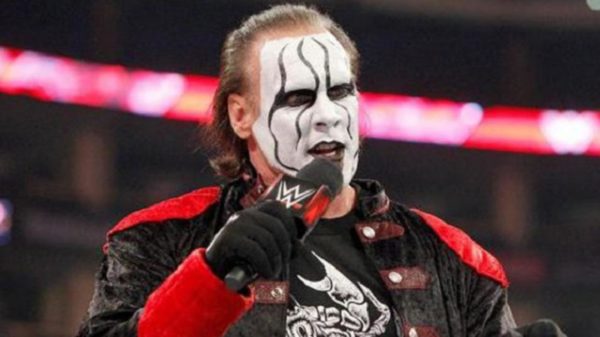 Over the past few days, WWE has pulled the merchandise of a huge name. On Thursday, all merchandise from Sting was taken off WWE Shop with no explanation.

Typically, this is done when someone is no longer under contract to WWE. The same thing happened with Brock Lesnar shortly after WrestleMania 36 and he is yet to re-sign.

Back in May, there was supposed to be a Sting figure as part of the Legends 7 Series from Mattel. At the time, Mattel said they would release the figure when he became available again.

He was also not part of last year’s WWE 2K20 video game.

A few weeks later, it was noted how Sting is no longer under contract to WWE. There is always the possibility the two sides could work out a deal, at least for merchandise.

Sting’s last appearance on WWE TV was in February 2019. He was part of Ric Flair’s birthday celebration, which never happened as Batista attacked “The Nature Boy” backstage.

That was his first appearance in about two and a half years.

After being inducted into the WWE Hall of Fame, Sting officially retired. His last match ended abruptly after taking a buckle bomb from Seth Rollins and damaging his neck.

The belief is Sting will never wrestle again. If he does, the only option would be against the Undertaker; with both wrestlers agreeing.