Eric Bischoff still has issues with Bret Hart, calling him winy and other names. And, one WWE superstar has undergone a slight name change.

Eric Bischoff and Bret Hart still have disdain based off the comments from the former WCW President. Also, WWE has changed Matt Riddle’s name.

Eric Bischoff: Bret Hart Is A B—-

With the holidays coming, do not expect to see Bret Hart and Eric Bischoff exchanging gifts. In fact, they probably will not be trading any greetings.

The two worked together, mostly during Hart’s run with WCW. Bischoff offered Hart a huge salary to jump ship and that is exactly what happened.

Over two decades ago, the Montreal Screwjob took place. With Hart not willing to the drop the WWE Championship in Canada, Vince McMahon had to get creative.

With a little assistance, a plot was put together where Hart lost the title without actually tapping out. Not longer after, Hart would join WCW.

During the 83 Weeks podcast, Bischoff had noting positive to say about Hart. He described the WWE Hall of Famer as nothing more than a complainer who wants to bury people.

“I don’t mean to say anything bad about anybody, but Bret has a tendency to be a winy b—-,” said Bischoff. “I told you a few months ago, I said I was going to take the high road.”

“But, he continues to rehash this negative nonsense and bury people. It doesn’t make me angry. That’s Bret.”

“Whether he is burying Ric Flair or whether he is burying Mick Foley or Vince McMahon or Eric Bischoff or Bill Goldberg, he is just a negative, miserable guy. That’s how he goes through his daily life. He was doing that in 1993 and he is still doing it today.”

As for Hart, his time in WCW was memorable for all the wrong reasons. He came in with lots of buzz, but fell flat.

Hart would work as a heel and face, even joining the NWO at one point. Although, backstage politics seemed to play a role in Hart’s demise.

His time in pro wrestling would end in WCW after taking a kick to the head from Goldberg early in their match. It led to a concussion and Hart was never able to fully recover.

Years later, he would say signing with WCW was the worst decision of his career. In particular, he regretted the move not long after faxing over the signed WCW contract.

While Hart and Bischoff are not friends, his relationship with WWE has changed. About 17 years after the Montreal Screwjob, Hart would return to WWE.

He even worked a few light matches, including a win over McMahon at WrestleMania. On occasion, Hart does make a few WWE appearances.

In the meantime, he has also appeared for AEW and mostly recently Impact Wrestling. 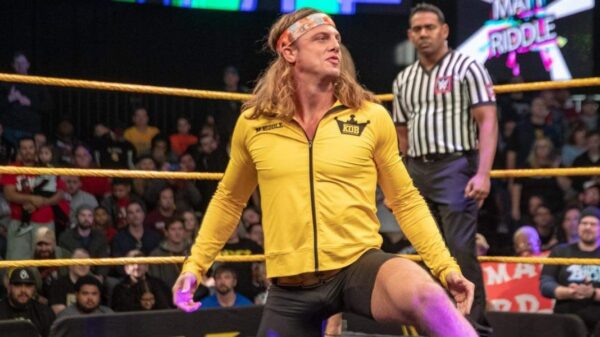 Vince McMahon is a big fan of Matt Riddle, which would explain his push. Despite being named as part of the #SpeakingOut movement, WWE continues to push Riddle.

In a slight change, WWE has decided to drop his first name on their official website. It does not seem to be a glitch as Riddle seemed okay with the call.

People it’s okay I’ve been called Riddle most my life, I actually prefer it and it’s my real last name 🤙 #bro #stallion #RIDDLE

After time in NXT, Riddle was sent to SmackDown. He picked up a bunch of wins against some main event talent, including the likes of AJ Styles and Baron Corbin.

As part of the WWE Draft, he was sent to RAW. So far, he still seems to be looking for his foundation on the red brand.

In his most recent outing, he was defeated by Sheamus for a spot on Team RAW at Survivor Series. The former UFC fighter is still new to WWE, but the fans dig this gimmick and more importantly, so does McMahon.