WWE had some shocking moments over the course of the years, but which were the top 5? WrestleNewz ranked the best ones for you! 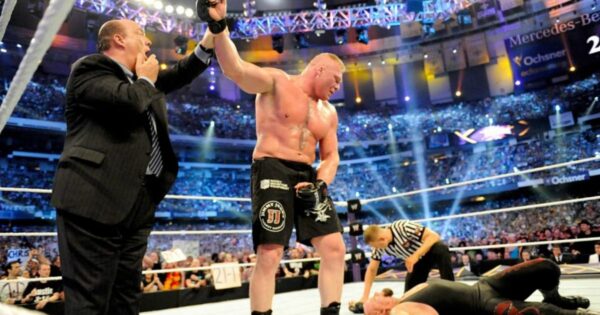 The Undertaker’s streak was one of the most unbelievable records in WWE history. Imagine fan surprise when that record came to an end because of Brock Lesnar.

The loss of Undertaker’s undefeated streak did not happen that easily though. In fact, Undertaker kicked out of Brock Lesnar’s F5 maneuver.

On the other hand, Lesnar managed to survive a chokeslam and two Hell’s Gate submissions. He also survived a Last Ride Powerbomb and Tombstone Piledriver.

As The Undertaker attempted another Tombstone Piledriver, Lesnar turned it into a third F5. It was this F5 that ended Undertaker’s undefeated streak.

When the Undertaker’s undefeated streak ended, his record stood at 21 – 0. This means the Undertaker won 21 matches at WrestleMania without a single loss until Brock Lesnar came along.

Now, the thing that was even worse was that the match was not even the main event. Instead, Daniel Bryan became the WWE World Heavyweight Champion.

Considering the shock and horror on people’s faces and the fact nobody believed the streak would be broken, this moment is our number one in the top 5 most shocking moments. 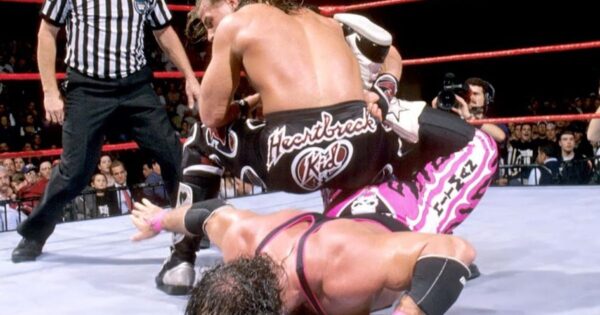 It was difficult to place this moment into the top 5 most shocking moments in WWE history. After all, this one could have just as easily been in first place.

The only reason I decided to put this one in second place is because of the real-life influences in this match. While the championship win was not the biggest shock, the controversy around it was.

Before the infamous moment, there was a lot of bad blood between Shawn Michaels and Bret “The Hitman” Hart. In fact, neither man could stand the other.

As Bret Hart prepared to leave the WWE for WCW, Vince McMahon wanted to take the title away from Hart. However, Hart refused to lose against Shawn Michaels, so he believed they had come to an agreement to drop the title against someone else.

Vince McMahon was scared however that Bret Hart would take the title to WCW with him. To avoid this from happening, he hatched a plan with Shawn Michaels and the match’s referee.

At one point, the referee would call the match as a submission, even Hart did not tap. As events went down, Bret Hart was furious.

Hart ended up spitting in Vince’s face, and later knocking him out backstage. It could have been worse on live TV though, as Bret’s brother Owen had to come down to the ring to calm him down. 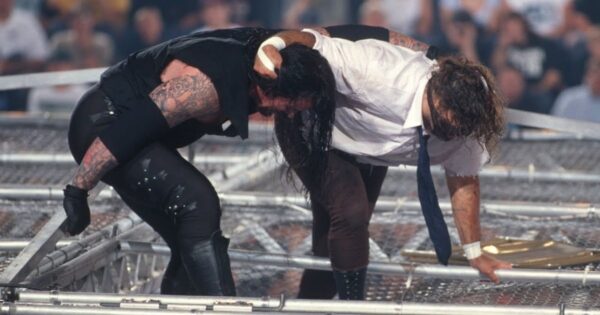 Mankind has done some crazy stuff over the course of his wrestling career. One of the most daring and shocking took place at King of the Ring in 1998.

When it comes to the epic cell structure, nobody has mastered it as much as Mankind. Of course, this honor was given to him after the man climbed and fell right through the cell.

Even though Mankind was seriously hurt after falling off the cell and then through it, he simply continued. Everyone remembered his tooth sticking through his face to this day.

Nowadays, a moment such as that between Undertaker and Mankind on top of a cell would not longer happen today. Because of safety standards as they are, this match would have been cancelled upon Mankind’s first fall from the cell. 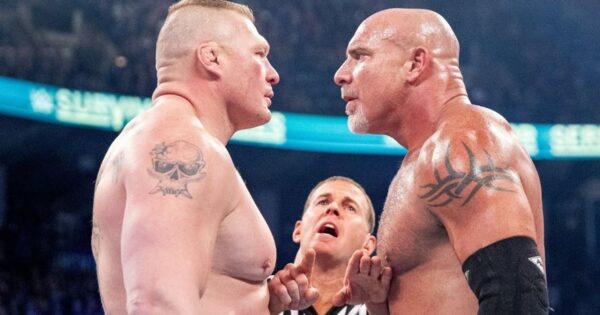 After a retirement of twelve years, the icon Goldberg decided to find out who was next once again. And it appeared he had his sights set on none other than Brock Lesnar.

As Brock Lesnar was marketed as The Beast, nobody expected that the returning superstar would stand a chance against Lesnar. However, things turned out much different than expected.

Since Goldberg is not the most diverse wrestler, and neither was Lesnar, the company had to be careful with how they put this match on. Of course, despite his limited moveset, Goldberg is always a treat to watch.

At the time of the match, the WWE Universe was sick and tired of Brock Lesnar. With very few title defences and an absent title, people were squarely in Goldberg’s corner.

While Goldberg was considered the underdog in this match, nobody expected the match would end that quickly. In fact, it took Goldberg less than five minutes to beat the Beast.

Naturally, the match was short and powerful for a reason. While both men did have the stamina for a longer match, WWE was most likely going for the shock effect.

Contrary to some of the previous moments, this moment included someone that had been previously ignored by the WWE. Hoping to break through in the Indian market, WWE decided to push Jinder Mahal.

There was only one problem with that though, because Jinder Mahal was a jobber for the longest time. So, he basically won the WWE Championship out of nowhere.

And Jinder Mahal did not beat just any superstar to win the title. In fact, he had to pin Randy Orton to begin his reign as the new WWE Champion.

It became obvious quickly that the plan with the title had nothing to do with US or Europe fanbases, but to conquer the Indian market. Ultimately, the WWE’s plan failed.

When he became the champion, it was clear Jinder Mahal was far from ready. By the time he fine-tuned his in-ring ability and persona, he dropped the title.

With Jinder Mahal disappearing in the background once again, it was a serious waste of time overall. If they had stuck with Mahal after this particular moment, the WWE would most likely have seen a return on their investment.

Despite the weird setup, this is still one of the top 5 most shocking moments in WWE history.