Finally, Undertaker is opening up about why Brock Lesnar was selected to end the WrestleMania Streak. Also, is Summer moving to a different month?

Undertaker is speaking about the conversation with Vince McMahon, when he learned Brock Lesnar would end the WrestleMania Streak. Also, SummerSlam 2020 could be coming to fans during the fall months.

WrestleMania is the grandest stage in all of wrestling, with defining moments. For 21 years, fans witnessed Undertaker continue his impressive WrestleMania Streak.

While talking to Ariel Helwani, Undertaker spoke about the conversation where Vince McMahon told him the streak would end.

“Most of my peers and people that I work with thought it was a horrible decision,” said Undertaker. “I just asked Vince, are you sure? Is this what you want?”

“He was like, ‘If it’s not Brock, who can beat you?’ from the way the streak was built and by that time. So it was like, alright, it’s your call.”

“Everybody thinks that I have all this juice that I can say yes or say no. I mean I could have said no. […] I’m business, and business comes first before anything personal.”

For everything Undertaker did for Vince, letting the WrestleMania Streak end was the biggest job. Decades of work was over in three seconds.

He continued that unlike in boxing, fighters such as Floyd Mayweather and Rocky Marciano can retire undefeated. In pro wrestling, you put someone over on the way out.

McMahon did bring up a good point about Lesnar. At the time, nobody had the presence to conquer such a task.

Last time fans saw Undertaker, he defeated AJ Styles to conclude night one of WrestleMania 36. Recently, there has been speculation of a rematch.

We will never know if Undertaker’s WrestleMania Streak ending was the right call. For now, you can watch a several part documentary about the Undertaker’s past few years on the WWE Network. 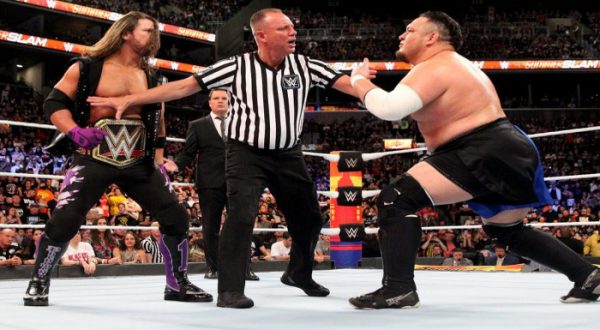 SummerSlam was supposed to come from Boston, Massachusetts. Due to COVID-19, the odds are extremely slim that happens.

The state still has several restrictions in place. These include only opening for essential businesses and limiting the number of people in one area.

With those rules and uncertainty about reopening, SummerSlam will need to be moved. Lately, WWE has been using their Performance Center for all TV.

They have hosted two pay per views and Backlash will likely follow. But, WrestleVotes reports that WWE is looking at other options.

An interesting idea being tossed around is moving the date. Instead of August, the pay per view would take place in September.

That would defeat the theme of “SummerSlam,” and there is still no guarantee a change in date would matter. Moving the show 30 days might not be long enough to see substantial change.

WWE is also looking at other places in Florida and Georgia. Florida recently produced a pair of UFC shows.

It looks like it is possible that @WWE will be postponing @SummerSlam till September more on this to come pic.twitter.com/j5Mx3FV7UK

Apparently Boston banned large gatherings until September so can WWE cancel SummerSlam already so I can get my $306 back?

Oklahoma and Nevada are also looking to ease their restrictions and could be possible states. A big draw would be allowing some fans to attend.

As for NXT Takeover, there are no current plans to run the event. Like Takeover Orlando, they could air it across several weeks on NXT.