At one point, WWE wanted Edge to defeat the Undertaker at WrestleMania and end the streak. Also, the latest on former WWE 24/7 Champion Riddick Moss.

Despite such a historic time, there was something bigger that nobody saw coming. Brock Lesnar ended the Undertaker’s WrestleMania Streak.

Heading into the event, Undertaker was 21-0. At the time, it felt like nobody would break the record.

Although, we all know what happened. Lesnar won and the live crowd and those at home went silent.

There was no mistake made by the referee or a screwjob. Basically, Lesnar was booked to topple Undertaker and take the streak.

Apparently, WWE was looking to end the streak for many years before that. While speaking to the New York Post, Undertaker’s wife, Michelle McCool, said WWE had another idea.

Back at WrestleMania XXIIIV, WWE wanted Edge to beat Undertaker. Eventually, Edge told WWE that he could not do it as the decision was not best for business.

“Actually I remember a few years prior that WrestleMania [24] versus Edge,” said McCool. “They talked about Edge breaking the streak and it was Edge that was actually like, ‘That makes zero sense. I don’t want to do that. Why would I do that? The fans already love him. What’s it gonna do for Edge?’”

“It was Edge that went to bat for the streak. I know they had talked about it prior to the match with Brock, but you know it happened.”

“It’s fine, it’s not like it’s an end-all, be-all for Mark by any stretch of the imagination. That’s the only other time that I’d heard about it [the Edge match].”

“But, [it ending] definitely made for some good memes for years to come. People’s faces for sure.”

Ending the streak was a risky move to begin with. To this day, people still think WWE made the wrong call.

Edge was undefeated against the Undertaker and at Wrestlemania at this point!
Him breaking the streak would have been massive!! https://t.co/bBW2nW2Bkk

Undertaker continues to wrestle, but has admitted that he has dramatically slowed down. Currently, WWE is preparing to air docuseries that followed Undertaker around the past few years.

Edge was forced into retirement, but returned this year. Currently, he has a lucrative deal from WWE that last three years. 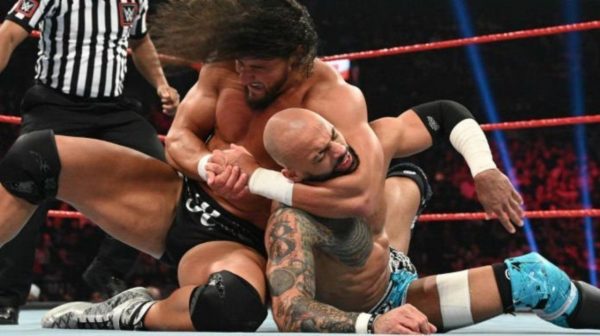 Out of the blue, Riddick Moss appeared on WWE TV one day. He quickly won the WWE 24/7 Championship and held it longer than most previous title holders.

Moss scored some wins during his time on the main roster over the likes of Cedric Alexander and Ricochet. He even got the victory over his friend, Mojo Raweley.

During night two of WrestleMania 36, Moss lost the title to Rob Gronkowski. Since then, Gronkowski re-signed with the NFL and there is no word if the 24/7 Championship is done.

The Wrestling Observer Newsletter noted that WWE has not given up on Moss. It is tough to tell if his lack of TV time involves COVID-19 or creative has nothing.

Honestly, Moss could return to NXT and nobody would probably notice. Hence, his main roster run has not been history making.