Shortly after the win, Triple H noted how Kross suffered what is believed to be a separated shoulder. Today, WWE confirmed the news and noted how Kross will have an MRI done Monday.

WWE medical staff confirmed that Kross sustained a separated acromioclavicular joint during his battle with The Limitless One. Despite the injury, a determined Kross took down the champion, showing incredible toughness by lifting Lee up for a devastating Doomsday Saito off the middle rope to claim the NXT Championship.

Kross will have an MRI on Monday to determine the full extent of the injury.

Stick with WWE Digital and Social platforms for more on Karrion Kross’ status as it becomes available.

Of course, the timing could not come at a worse time. In a matter of months, the undefeated superstar debuted on NXT and won the top title in only his second Takeover appearance.

As seen in the video below, Kross was examined by WWE staff after the show. He was clearly in lots of pain, despite finishing the match. 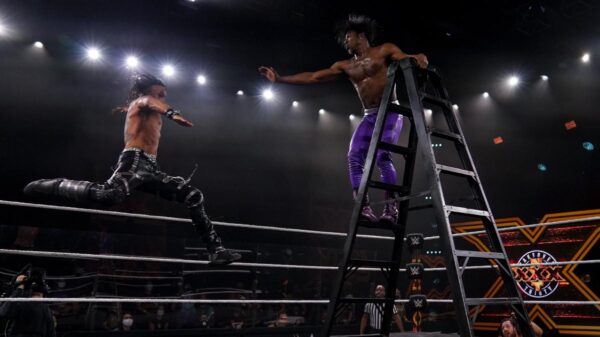 People have come forward and said Dream contacted young boys and girls. He allegedly was grooming them and there was also mention of sending nude pictures.

WWE said they conducted an investigation and found nothing to support the accusations. Triple H already commented on the matter, but he was asked again during the post-show Q&A.

“I mean we’ve talked about this,” said Triple H. “We said our peace on it.”

”I understand people’s positions and their feelings of something that they’re really just seeing accusations online. Nothing that needs to be said more on it again.”

Here are just a few of the tweets regarding Dream working last night’s show.

it’s what he deserves – #FireVelveteenDream

literally nobody but triple h wants velveteen dream in this match. stop giving a groomer a platform!? it’s not that hard considering you fired enzo (human trash) before the investigation was over. #FireVelveteenDream.

If you still support Velveteen Dream or you’re defending him, unfollow me immediately.#FireVelveteenDream