Mickie James' return could happen at anytime as she was cleared for a return months ago. And, WWE made a big purchase as they now own EVOLVE.

After a year away, Mickie James’ return inside a WWE ring could happen at any moment. Also, WWE has purchased another promotion in EVOLVE.

Missing from WWE TV for over a year now is Mickie James. On June 1, she suffered an ACL tear and the following month would undergo surgery.

She was given a nine month window to return, but is yet to lace up her boots. Instead, she has been at the commentary table for Main Event.

While speaking with Chris Van Vliet, James stated the doctor cleared her but COVID-19 caused WWE to change their plans. She continued how the virus has caused her not to visit the WWE Performance Center.

“The doc had already cleared me,” said James. “So, I was literally just getting that last two weeks to get cleared to come back to in-ring action and everything got shut down. So, I went home and I just haven’t been back since.”

“There’s no need to take that risk of going there if I’m not doing anything. I would rather bide my time and wait for the perfect opportunity.”

At 40 years old, the ACL tear was the first injury during James’ career. While the promotion seems to have certain female superstars they want to build the company around, James sill has value.

Love you @MickieJames you still with @WWE if not what are chances you end up on @nwa https://t.co/Uj2DTsqC7K

With all the gold she has won and Hall of Famers she fought, her insight is gold. Perhaps, her days being a possible  leader of the roster are done.

Still, she brings lots to the table for younger talent. Otherwise, WWE would have fired her back in April during cost cutting measures. 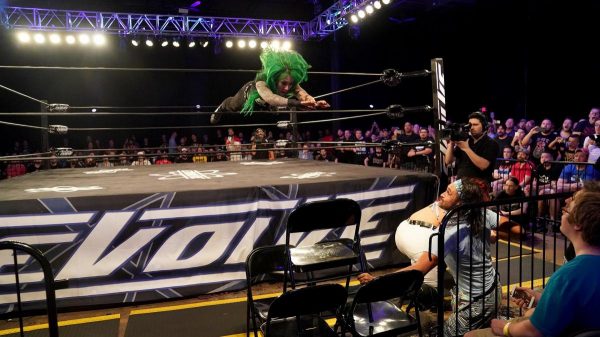 For months, there has been speculation that WWE was looking to purchase an Indy promotion. They followed through and now own EVOLVE.

According to PWInsider, WWE now owns the complete rights to the name and also the library. Owning the library is a huge score for anyone.

Lots of talent have gone through EVOLVE and now the videos belong to WWE for future projects. This will allow more content for the Network and also in video packages to promote angles.

We should note, EVOLVE is not shutting their doors. They are simply now owned by WWE.

Sal Hamaoui will now be producing new EVOLVE content. As for Gabe Sapolsky, he has been given the title of creative write for NXT.

The purchase should not come as a major surprise. The company always had a good relationship with EVOLVE management and COVID-19 caused the Indy promotion to financially suffer.

When they were forced to cancel their WrestleMania 36 weekend events, that was basically the end. That  loss was simply too much to counter.

As for the talent, WWE will bring some over. There are reports WWE has offered four wrestlers contracts for NXT.

EVOLVE formed in 2010 by Sapolsky and saw some future WWE stars make a presence. Those names include Austin Theory, Matt Riddle,  Johnny Gargano, Drew Gulak and many others.

In summary, WWE made a great purchase with EVOLVE.