The WWE has hired back former producer Pat Buck, who replaces an injured Michael Hayes. And, some AEW stars have landed in trouble.

WWE has brought back a former producer as Michael Hayes needs time off. Also, AEW stars landed in trouble.

Pro wrestling fans have noticed a handful of furloughed wrestlers have been brought back in recent weeks, and now, a producer is expected to be returned as well.

One of the night furloughed producers in April, Pat Buck, has been brought back to handle some of the duties of Michael Hayes, who will miss time to have surgery.

The WWE released Buck, Billy Kidman, Mike Rotunda, Dave Finlay, Shawn Daivari, Scott Armstrong, Sarah Stock, MVP, Shane Helms and Lance Storm earlier this year. According to reports, Buck is back in the fold, returning this past Monday during the tapings at the WWE Performance Center.

With Hayes set to be sidelined for an extended period of time while he undergoes hip surgery, Buck will fill-in.

Guess who’s back? Back again! Pat Buck is back…tell a friend! @buckneverstops is back with WWE! Coincidentally enough, he is also our next interview. Make sure to tune in this Monday 🔥 pic.twitter.com/BHGpuYvBoW

WWE officials will allow Buck time to get back into the groove of his role, but Hayes is expected to be re-inserted as a producer once he is cleared. It remains unknown at this time what will happen to Buck.

According to previous reports, the WWE was hoping to have all of the producers back working by July. However, that could be in jeopardy due to issues still keeping the company from opening back up completely.

Buck, a 35-year-old from New York, competed for several independent promotions including Ohio Valley Wrestling. He also was a co-owner of the Pro Wrestling Syndicate promotion. 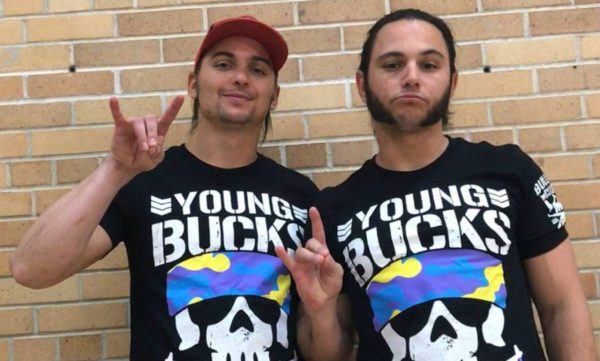 According to Bryan Alvarez of Wrestling Observer Live, All Elite Wrestling stars are being scolded for not doing their part to keep each other healthy while attempting these kind of moves.

“There have been a lot of people who have not been caught properly,” Alvarez said. “Not just in AEW, but it’s been a deal in AEW. There’s been a lot of just bodies going flying and they crash and burn on the ground.

“I do know that there have been people yelled at over it like: ‘Dude! Start catching people here!’”

During a May episode of AEW Dynamite, three wrestlers suffered injuries including Fenix. His injury is believed to have happened while attempting a move from the top ropes.

Fenix jumped off onto a host of wrestlers who were supposed to catch him, but he landed short of the group and hit the ground hard.

Another of those injuries was to Matt Jackson, one-half of the Young Bucks. Jackson suffered his injury while attempting a dive from the top in a brawl that also featured Adam “Hangman” Page and The Inner Circle.

The Young Bucks came back to Dynamite just in time!
Watch #AEWDynamite NOW on @TNTDrama or https://t.co/GdI7QAsxEP for our International fans. #AEWonTNT @AEWonTNT pic.twitter.com/EkOnIbPU6n