WWE once again aired out of the Performance Center and here is the Backlash 2020 report card with a detailed description of each match.

WWE Backlash 2020 continues the trend of events coming from the Performance Center due to COVID-19. See how the Greatest Wrestling Match Ever scored on our report card, along with the rest of the card.

We are following last month’s Money In The Bank pay per view and the major creative shake-up this week with Paul Heyman no longer being RAW Executive Director. 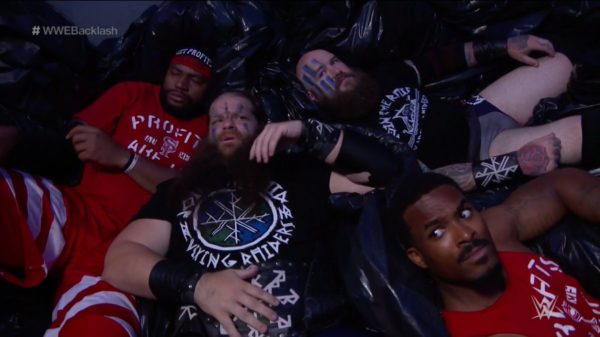 This was not a match, but it deserves a mention. While the two could have delivered an entertaining match, WWE went the cinematic route.

With what is taking place around the world, I see the value. Although, cinematic matches should be saved for huge angles.

Heading into Backlash, I did not expect to see ninjas. At the same time, who knew alligators stayed in dumpsters.

I would have rather seen a match. Yet, those 10 minutes did not hurt the show. 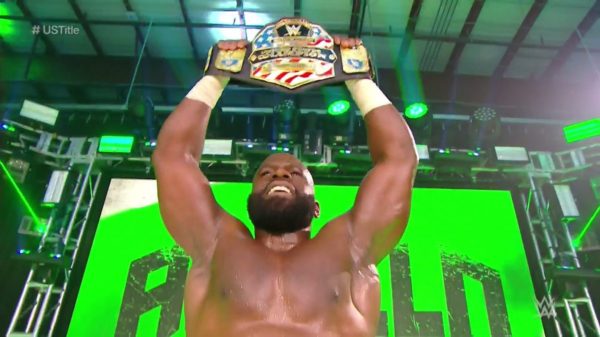 In recent weeks, Apollo Crew has been given a major push. He went from chasing the 24/7 Championship to winning the United States Championship.

As for Andrade, he has been headed in the opposite direction. He was suspended for violating the Wellness Policy and then missed WrestleMania 36 due to injury.

The match was noting too special. We have seen them battle on RAW and that will probably continued for a few more weeks.

Kevin Owens getting involved was the biggest moment. Clearly, Owens is not done with Zelina Vega’s stable. Grade: B- 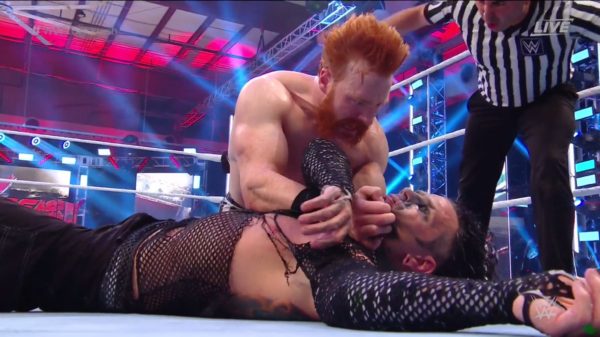 First, WWE does no favors with this kind of angle. Jeff Hardy’s demons might be public, but there is no need to exploit them.

Sheamus going after Hardy because of his past with drugs and alcohol is a strange direction. Somehow, we might see Sami Zayn enter the program as the person who blackmailed Hardy.

The past few years have seen Hardy and Sheamus focus on the tag division. Both are previous WWE Champions, although those days might have passed.

Plenty of trash talk from Sheamus, which helps solidify a heel when there is basically no live crowd.

The match felt a little exhausting and the last few minutes should have been cut. Although, the brogue kick on the outside connected nicely. Grade: B 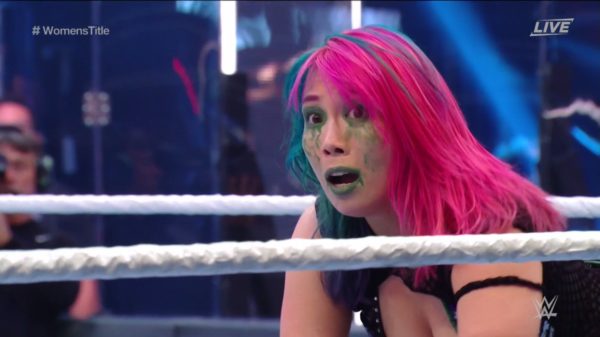 With Becky Lynch pregnant, the entire RAW women’s division needed to be redone. Asuka turned face and was awarded the title by winning MITB, with Nia Jax not thrilled about what happened.

Early on, Asuka relied on her submission skills to counter the power of Jax. After being a comedy act, Asuka is starting to show signs of that undefeated NXT version.

When the referee reached a ten count, it made me think maybe someone botched the finish. There are plenty of challengers, so the count out was a strange conclusion.

The match was picking up and then a sudden end. The grade was lowered for the poor booking to end Asuka’s first title defense. Grade: B 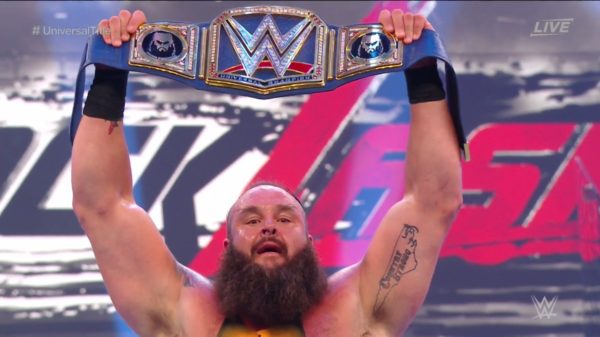 The most important rule from the match was the person who gets the pin or submission becomes champion. Therefore, WWE cannot have The Miz and John Morrison being co-Universal Champion.

As expected, great tag team work by The Miz & Morrison. With Braun Strowman’s size, Morrison’s style of wrestling was the perfect counter.

The Miz & Morrison seemingly have the title won. But, like we all knew, whoever would get the pin caused tension.

Those problems allowed Strowman to retain. Maybe, The Miz gets a singles match since Morrison took the pin. Grade: B 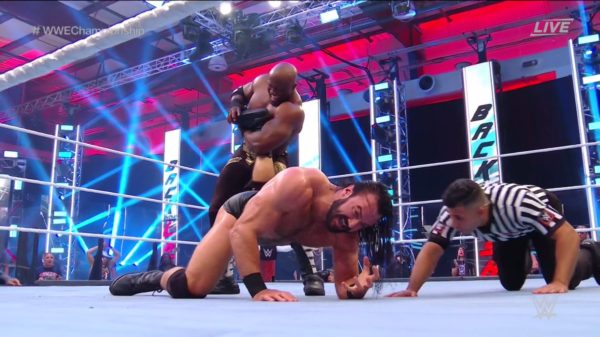 Ever since MVP joined Bobby Lashley, we are starting to see is full potential. Having Lana also involved could be the reason Lashley is yet to hold the title.

Lashley jumped Drew McIntyre and controlled the first half of the match. Eventually, McIntyre was able to get some offense.

I do wonder if Lashley should have added more MMA styles moves to his arsenal. Trading submission locks at the end was fun to watch.

Considering how McIntyre won, you have to think Lana and Lashley might be done. Anyway, MVP is better for Lashley. Grade: B

What happens when two absolute 𝙢𝙖𝙘𝙝𝙞𝙣𝙚𝙨 collide at #WWEBacklash for the #WWEChampionship? 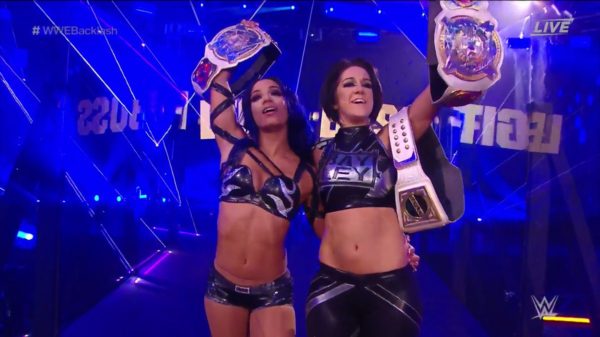 The Women Tag Team Championship has been around for over a year, but only four teams have held the gold. Three of those teams met at Backlash.

Each team worked well together and they had no trouble getting help from others. A strong start to the main card that highlighted the importance of those titles.

I was waiting for one team to in implode. It did not happen at the pay per view, but some major break-ups are coming. Grade: B+ 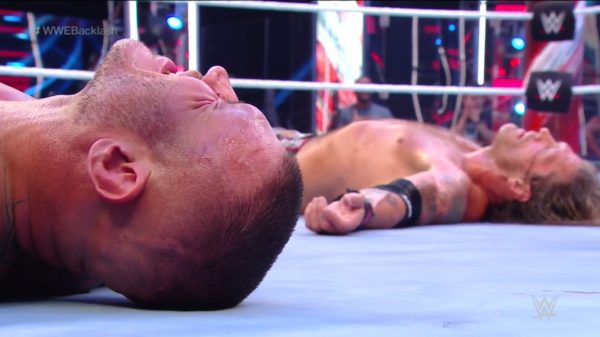 When something is titled the Greatest Wrestling Match Ever, a few things come to mind. Mostly, a lengthy contest with rest spots and the match is destined to fall short.

Nobody can deliver the greatest match ever based off a tagline. It just happens naturally and the fans will know when they see something special.

My early thoughts, the match looked like a WWE video game with all the camera angles. And, I think a bunch of audio was added over the action.

The match was fine, but not the greatest thing since sliced bread. It was more entertaining than their WrestleMania 36 battle, even though it ran long.

Honestly, AJ Styles vs. Daniel Bryan on Friday’s SmackDown was better. Still, Edge and Orton went out there and did their best. Grade: B+