The Hardy family were not happy with the recent DUI angle with Jeff Hardy. Also, a big backstage name was fired for unprofessional behavior.

Jeff Hardy’s recent angle on SmackDown hit close to home and some of his family were not happy. And, a big backstage name was just let go.

The most recent episode of SmackDown wasted no time with action. Outside of the WWE Performance Center, fans saw Elias on the ground after apparently getting hit by a car.

Also on the scene, an officer found an open bottle and paperwork belonging to Jeff Hardy. Not much later, Jeff was seen being handcuffed and dragged from the building.

That changed the Intercontinental Championship tournament as both were unable to compete. Therefore, AJ Styles got a free ride to the finals and a battle royal took place with the winner wrestling Daniel Bryan.

Sheamus won the battle royal, but was unable to defeat Bryan in the main event. Instead, Jeff returned and distracted Sheamus enough for Bryan to enter the finals.

The beginning of the angle is WWE bringing real life moments into storylines. Jeff’s past troubles with drugs and alcohol is no secret.

During Jeff’s first run in WWE, he eventually left after refusing rehab. He worked in Impact Wrestling and was part of the infamous 2011 Victory Road pay per view.

During the pay per view, Hardy was heavily under the influence and in no condition to wrestle. An audible was called in the ring by Eric Bischoff and Sting won in a minute.

Eventually, Jeff cleaned up and would return to WWE (for the third time) with his brother Matt Hardy. For the most part, Jeff managed to stay out of trouble.

But in 2019, he was arrested twice. First for public intoxication in South Carolina and then driving while impaired only months latre in North Carolina.

Reactions from Matt And Reby Hardy

Well, Matt and his wife Reby Hardy were watching SmackDown and did not seem happy with the angle.

You cannot blame Matt or Reby for questioning the segment. Jeff will always struggle with addiction, so turning that into an angle seems wrong.

If WWE wanted to make Jeff vs. Sheamus, there were plenty of ways to do so. Dragging the dark times from one’s past is not the proper way to handle things.

The Observer says @chrisdejoseph was let go by #WWE. He was “one of the lead writers for #SmackDown.”

Chris DeJoseph sucked up to WWE for years only to get canned a few months later. 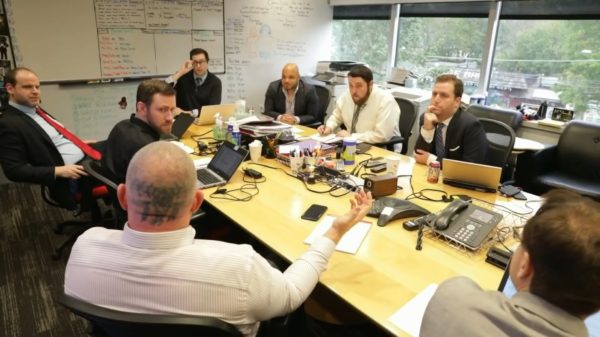 There was a sudden departure from WWE this week. WWE released Chris DeJoseph, who was the lead writer for the SmackDown brand.

His release had nothing to do with WWE letting go of 40% of their employees due to COVID-19. But, the departure was not for positive reasons.

There is speculation that DeJoseph was fired for doing something considered highly unprofessional. As of now, there are no details on what happened, but word is Vince McMahon was involved.

This was DeJoseph’s second run with WWE. He worked as a writer and producer from 2004 to 2010. In December 2019, he returned around the time of the TLC pay per view.