WWE Money In The Bank 2020 Report Card: Grades Are In!

WWE was back on pay per view, with the ever popular Money in the Bank. Two new briefcase holders were decided and here's our report card from the show.

There were titles, ladders and some wild spots at Money in the Bank 2020. Now, it’s time to hand out some score with our report card.

WWE Money In The Bank 2020 Report Card: Grades Are In!

Please note, the MITB Ladder Matches were scored separately. And do not forget, let us know how you scored the card. 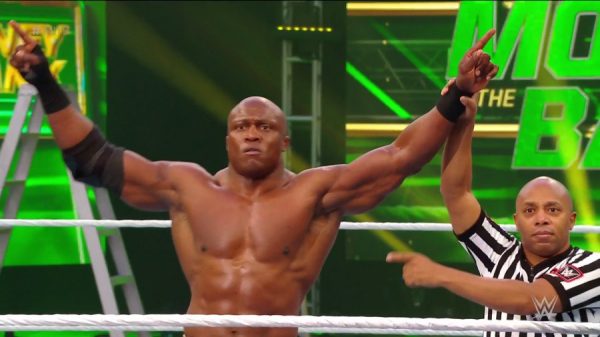 Originally, the match was supposed to be R-Truth vs. MVP. Before we got the bell to ring, Bobby Lashley took the place of MVP.

It seems like WWE is moving forward with the idea of a stable featuring MVP as the leader. Adding Lashley is a good addition, as he is the power and also needs something to do.

Hearing MVP cut a promo before the match showed he still has skills on the mic. R-Truth was his typical entertaining-self.

There is not much to takeaway here. Basically, we got a two minute filler to help establish a new stable. Grade: C-

.@RonKillings thought a match with @The305MVP was happening at #MITB, but the former #247Champion found himself in a match with @fightbobby! pic.twitter.com/loEprk3t1G

Women’s Money In The Bank Match: Asuka vs. Shayna Baszler vs. Nia Jax vs. Dana Brooke vs. Lacey Evans vs. Carmella 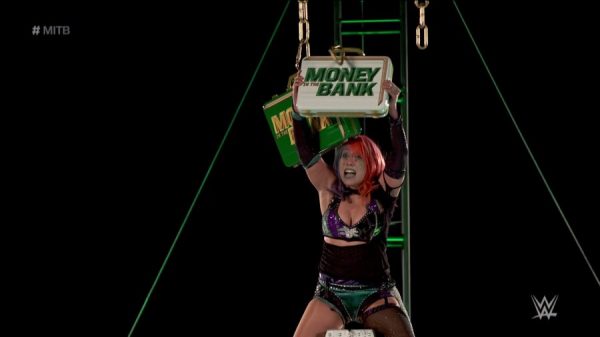 Compared to the men’s MITB Match, the women were not given much attention. Not sure why WWE went in that direction.

I liked Dana Brooke getting the wrong briefcase and then Stephanie McMahon appears to clarify the situation. The food fight with Paul Heyman was something and Nia Jax might have won.

The end, atop the roof, did not work for me. Asuka was a great selection, but everting again felt rushed. Grade: C+

Foiled by the #MITB conference room!@StephMcMahon just broke it to @DanaBrookeWWE that the REAL contract is on the roof. pic.twitter.com/JFiph4poJA

The Women’s #MITB #LadderMatch is off to an INSANE start as @WWEAsuka takes a leap of faith at WWE HQ! pic.twitter.com/sb3ZOda4Cq

Men’s Money In The Bank Match: Daniel Bryan vs. Aleister Black vs. Rey Mysterio vs. King Corbin vs. Otis vs. AJ Styles 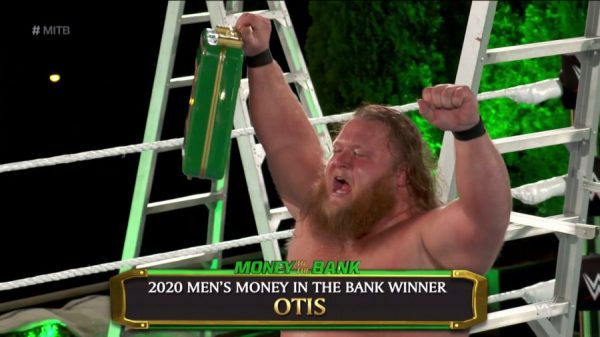 Some funny moments here, starting with AJ Styles getting stuck under the weights. Then, he found an office at WWE Headquarters with coffins.

Brother Love made an appearance from the bathroom and People Power retuned. Also, Vince McMahon got disrupted; but, at least he used hand sanitizer.

On top of the ladder, Styles and King Corbin battled over the briefcase. Elias makes a return and Otis wins.

Yes, Otis has won MITB. Either he is the worst choice or Vince McMahon has high hopes. Grade: B- 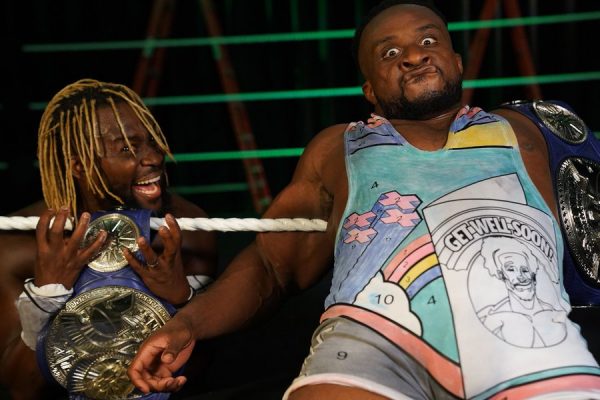 WWE looked to have longterm plans for New Day, The Usos and The Miz & John Morrison. Then, one of The Usos suffered a serious injury and he will be out for six to nine months.

Therefore, WWE needed to change their plans. With one team out of the equation, they just added two new ones.

The Forgotten Sons were given the main roster spot due to The Usos injury. So, there was no real storyline there.

The action is already off the charts at #MITB with the #SmackDown #TagTeamTitles on the line!@WWEGranMetalik & @TheRealMorrison look to SHOCK and AWE! 😲 pic.twitter.com/eG0gQCP61q 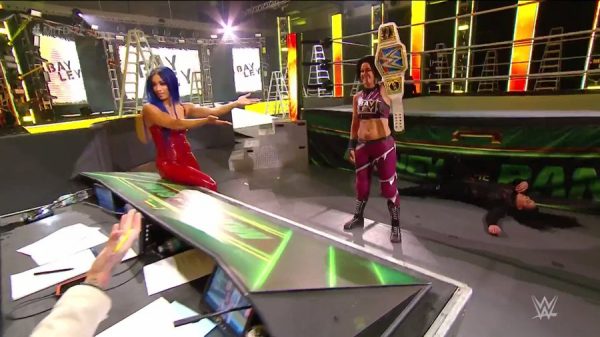 Honestly, Tamina working as a face is still tough to follow. As for Bayley, she has really embraced the role of villain.

With Sasha Banks on the outside, you knew she would get involved. I thought Banks and Bayley worked well together, even if it was just banter.

Bayley has been champion for most of the past 12 months and nothing has changed. Of all the people to cost Bayley the belt, it will be her best friend Banks.

Tamina has been with WWE for 10 years and finally she is starting to make leeway. Maybe, after so long with WWE, she can get a taste of gold. Grade: B 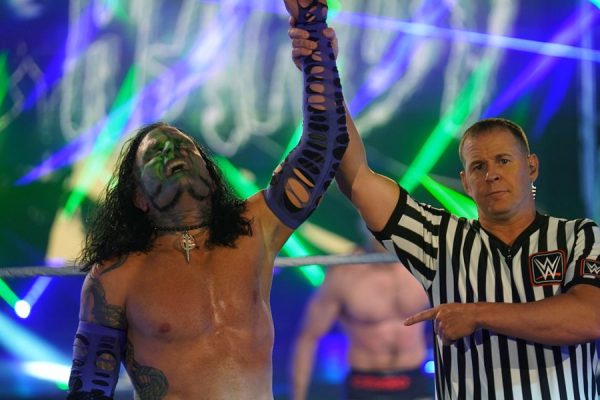 We have not seen a competitive Jeff Hardy inside a WWE ring for over a year. Considering what happened on SmackDown, I figured Sheamus would be placed in the match.

To my surprise, Sheamus was not booked. Actually, he did not even appear after the match.

Cesaro is always reliable and the right choice for someone who has been gone for so long. Overall, a good performance by both and I would not be surprised if they meet again this month.

Hardy gets the win and moves one step closer to the top of the roster. After the Sheamus feud, Hardy could be back in the title picture. Grade: B 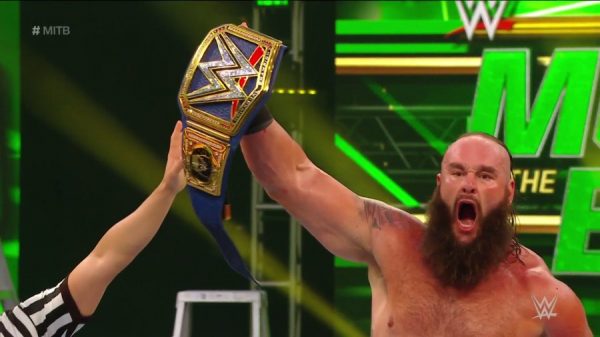 We need to note, this was Bray Wyatt taking on Braun Strowman. If it was The Fiend, the match would have gone a completely different direction.

Having the puppets appear at ringside was clever. If there can not be any fans, use the empty space to your advantage.

Strowman is no longer under the spell of Wyatt. He is his own man and that involves carrying gold.

With Wyatt not leaving as champion, that could mean someone else is coming. The Fiend vs. Strowman could be in the works for the next pay per view. Grade: B

Looks like @WWEBrayWyatt had a friend unexpectedly show up at ringside! 🐷@BraunStrowman looks to overcome the mind games and retain the #UniversalChampionship at #MITB! pic.twitter.com/1lm73wvhcY 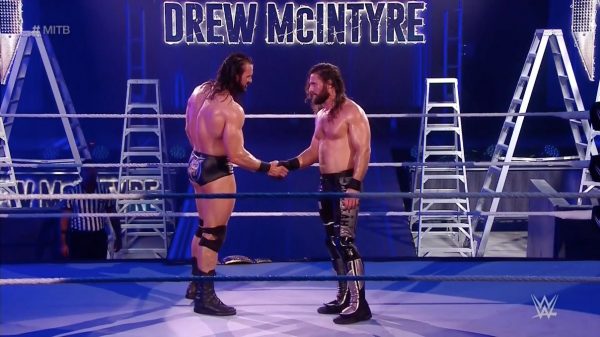 Drew McIntyre and Seth Rollins can make anybody look. They seem to honestly care for the business and went out there like there were 80,000 fans.

Hard-hitting affair with both getting in some big offense. Impressive with McIntyre catching Rollins midair and following with an overhead belly-to-belly suplex onto the announce table.

Rollins hit his typical spots, that are always great to see.

I thought it was interesting no Murphy. But, Rollins accepting McIntyre’s hand out of respect was a major storyline twist. Grade: A-

It’s INTENSE and it’s HARD-HITTING between @DMcIntyreWWE & @WWERollins with the #WWEChampionship on the line at #MITB! pic.twitter.com/xw205VLTuo