Sami Zayn is no longer Intercontinental Champion and WWE is unhappy with their superstar. Also, here are the original plans for Money in the Bank.

Take a look around WWE TV and several familiar names have been appearing. Due to COVID-19, talent are having trouble getting to Florida due to travel restrictions and safety concerns.

That would explain why Robert Roode and The Singh Brothers have not been on TV. They all live in Canada and traveling to the United States is difficult at the moment.

But, then there is someone like Brock Lesnar. WWE was able to pull some strings and get Lesnar to at least work WrestleMania 36.

We have also learned that Sami Zayn was forced to vacate the Intercontinental Championship. He is one of the superstars taking WWE up on their offer to stay home.

Apparently, according to the Wresting Observer Newsletter, the decision by Zayn has upset several people backstage.

“Even though nobody can say it publicly for obvious reasons, there is a lot of unhappiness that Zayn exercised the option that they gave everyone regarding not wrestling if you don’t want to right now. I mean, the IC title doesn’t mean much and we’re long past the period of taking titles too seriously and they can do whatever they want.”

On tonight’s SmackDown, WWE begins a tournament to crown a new champion. The finals could take place in a few weeks at Backlash.

I feel so bad for Sami Zayn.

The man literally gives his all for professional wrestling. Has such a short lived NXT Championship run, injuries in his WWE tenure and, the moment he gets the IC Championship, apparently quarantined and probably vacating.

I hate it here.

Make the jump to AEW, Sami. You’ll be more appreciated. I support you. pic.twitter.com/1OGO5Y4SFo

Zayn won the title back at Elimination Chamber after a lengthy absence from the ring. Also, it was his first major title since joining WWE’s main roster.

There is some speculation that Zayn is unhappy in WWE and could be looking to get out if his contract. As of now, that has not been confirmed.

WWE had to change several champions around due to COVID-19.

Jordan Devlin had to relinquish the title because he lives in Europe. He was unhappy and vocal about WWE’s decision.

Also, on NXT, Matt Riddle had to find a new partner since Pete Dunne is also stuck overseas. In the storyline, Riddle recently lost the NXT Tag Team Championship.

Basically, NXT UK is on pause at the moment as WWE cannot head over there. They have been airing best of episodes for the past month.

Original Money In The Bank Plans 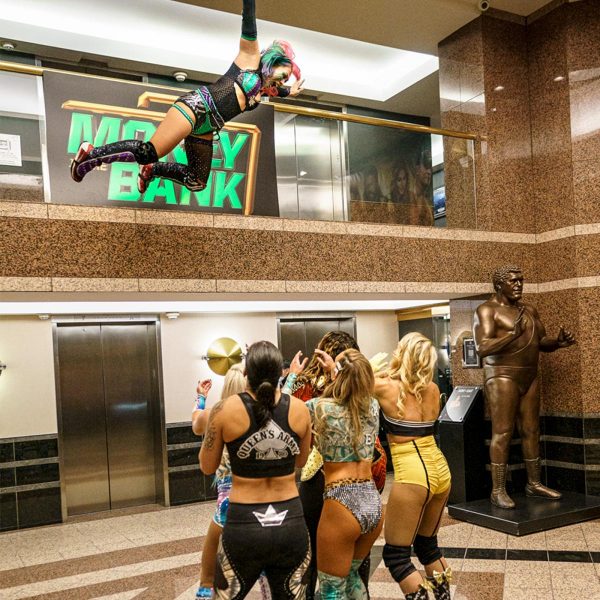 Money in the Bank (MITB) was special this year, with both matches taking place from WWE Headquarters. In the end, Otis and Asuka left with briefcases.

Then on RAW, we learned that Asuka’s briefcase was to actually crown a new champion. Becky Lynch’s nearly 400 day reign was over as she is pregnant.

The Wrestling Observer Newsletter stated that WWE had to change their plans. At first, Shayna Baszler would win and then hunt down Lynch on TV.

Baszler winning would have continued their feud from WrestleMania 36. The goal was to make Baszler the next champion, but Lynch’s pregnancy caused changes to be made.

Seeing how WWE invested lots of time into Baszler, she could be getting a title shot sooner or later. Asuka and Baszler were the most dominant females in NXT, so a main roster feud feels right.

From ‘Moonrise’ To ‘Onimusha’, Here Are The Highlights From Netflix’s Tudum 2022

ESPN’s Stephen A. Smith Continues To Destroy His Own Credibility, Calls For “Someone To Be Fired” After Tua Tagovailoa Injury